From the eastern end of the parking area, at the sign “Welcome to Bloomingdale,” follow the blue-blazed Hewitt-Butler Trail, which heads north and descends to Posts Brook at Otter Hole, an attractive cascade and waterfall. Here the trail crosses the brook on large boulders. Just beyond the brook, you’ll reach a junction where the light-green-blazed Otter Hole Trail leaves to the left. Turn left and follow the Otter Hole Trail, which is co-aligned with the teal-diamond-blazed Highlands Trail. The trail climbs through mountain laurel, then continues ahead on a woods road.

About half a mile from the start, you’ll come to another junction, where the yellow-blazed Wyanokie Crest Trail crosses. Turn left and follow the yellow blazes (and the Highlands Trail’s teal-diamond blazes), which descend to cross a stream on rocks. The trail now begins a very steep climb, gaining 200 vertical feet in only 0.1 mile. Near the top of the climb, the trail reaches a viewpoint from the ledges of Buck Mountain. This east-facing viewpoint offers a broad panorama, with the New York City skyline visible in the distance on a clear day. 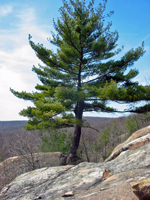 At the crest of the rise, the trail crosses over to the western side of the mountain. It soon reaches a second viewpoint, marked by a large pine tree wedged into the bedrock and an interesting glacial erratic formed of puddingstone conglomerate. This expansive viewpoint overlooks the south and west, with Torne Mountain visible directly ahead.

From the viewpoint, follow the Wyanokie Crest Trail as it heads north through laurel, passing several huge boulders on either side of the trail. Soon, the Highlands Trail departs to the left, and then the Wyanokie Crest Trail joins a woods road that comes in from the right. The trail turns right at a T-intersection, then immediately bears left at a Y-intersection and climbs gently to level off along the ridge of Buck Mountain. Along the ridge, the trail reaches the highest elevation in 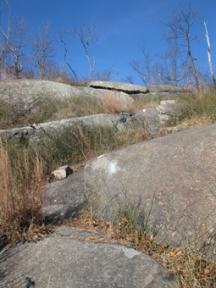 the Wyanokies (1,240 feet), but there are no views from this wooded spot.

In half a mile, the Wyanokie Crest Trail comes out at another east-facing viewpoint over Assiniwikam Mountain, with the view partially obscured by vegetation. It now begins a gradual descent into a broad valley, where it parallels a brook, crossing it several times. The last crossing of the brook is marked by an unusual split boulder. The trail now climbs through a mountain laurel thicket, levels off and continues along undulating terrain. After crossing a woods road (the junction is marked by a cairn), the Wyanokie Crest Trail continues through an area with many fallen trees, then climbs a rocky slope to end at a junction with the red-on-white-blazed Wyanokie Circular Trail and the pink-blazed Will Monroe Loop on a shoulder of Assiniwikam Mountain.

Turn right, following the red-on-white blazes of the Wyanokie Circular Trail, which descends on switchbacks and then climbs a little to cross a rocky woods road. A short distance beyond, it passes to the left of a huge fractured glacial erratic and conti 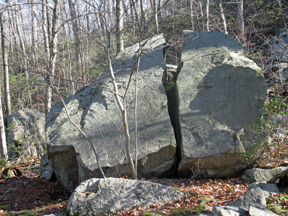 nues to climb past more erratics. After briefly following along the edge of a rocky escarpment, the trail descends to a woods road – the route of the light-green-blazed Otter Hole Trail.

Turn right at the junction (marked by a cairn) and follow the Otter Hole Trail, which goes through a valley and continues past dense mountain laurel thickets. In three-quarters of a mile, you’ll reach a rock outcrop to the right of the trail that offers views across a valley towards Buck Mountain. A short distance beyond, you’ll arrive at a junction with the yellow-blazed Wyanokie Crest Trail. Continue ahead, now retracing your steps. When the Otter Hole Trail ends at a junction with the blue-blazed Hewitt-Butler Trail, turn right, cross Posts Brook, and follow the blue-blazed trail back to the parking area where the hike began. 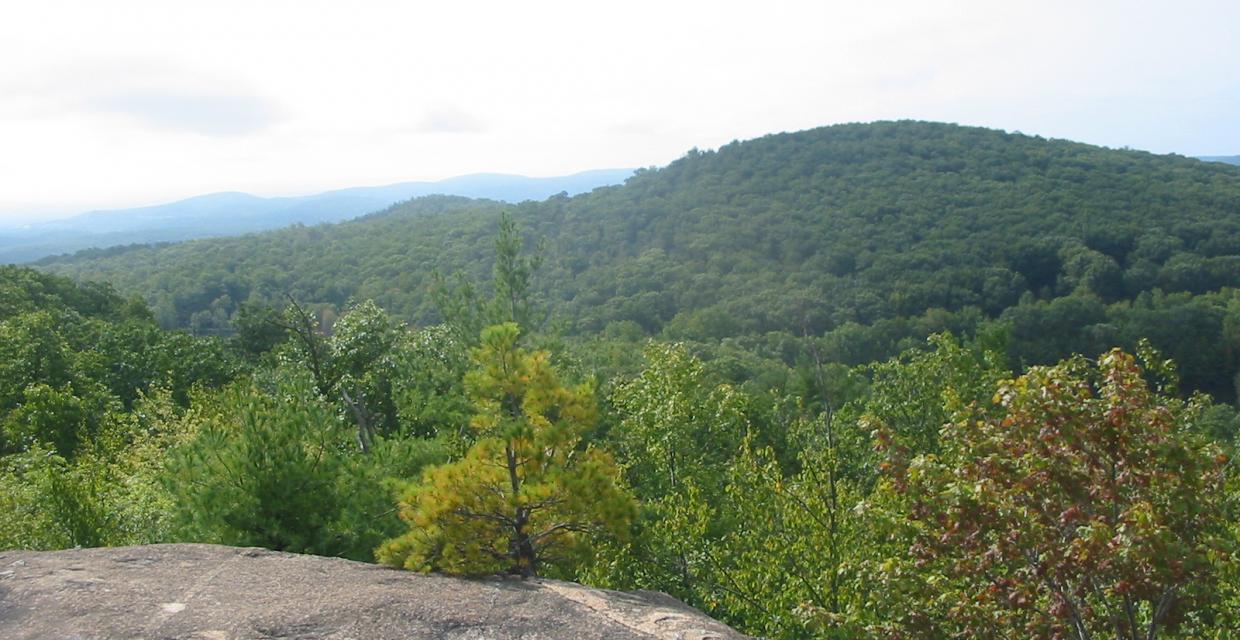 This loop hike climbs to several expansive viewpoints on Buck Mountain and returns along a pleasant woods road.

From the eastern end of the parking area, at the sign “Welcome to Bloomingdale,” follow the blue-blazed Hewitt-Butler Trail, which heads north and descends to Posts Brook at Otter Hole, an attractive cascade and waterfall. Here the trail crosses the brook on large boulders. Just beyond the brook, you’ll reach a junction where the light-green-blazed Otter Hole Trail leaves to the left. Turn...

Take I-287 to Exit 53 (Bloomingdale) and turn left at the bottom of the ramp onto Hamburg Turnpike. Upon entering Bloomingdale, the name of the road changes to Main Street. In 1.3 miles (from I-287), you will reach a fork in the road. Bear right, and in another 0.1 mile, turn right (uphill) onto Glenwild Avenue, following the sign to West Milford. Continue ahead for 3.2 miles to a parking area on the right side of the road.

rate experience
June 16, 2020
5
Fun hike for a family
This hike took us the prescribed 3 hours (with 2 snack breaks!) but our Apple watch said it was 5 miles, not 4, for those who are interested. The first 3rd of the hike is more in the strenuous side of things with a very steep climb up the mountain. We had a group that ranged from 7 to 60 and all of us enjoyed it and were able to complete it. The first third had the most views as well as stepping across the rocks on the stream which is fun for kids especially and the latter two thirds involves traveling through the forest in different terrains(we went in the summer so the brooks were more dried up). Without the perfect turn-by-turn instructions here we would've been struggling so I am very grateful for this clear description. (Only note: When you are leaving the Red-and-White circle trail the description says "marked by a large cairn", it is a cairn but not particularly large just a pile of intentional rocks!) Strong recommend on this hike!
RSich
June 26, 2016
0
Great Hike
<p>Good hike, good directions. Just 2 comments....it sure seemed more than 4.1 miles ....and the one rock climb is a little tough for us octogenarians!</p>
stretchfab
June 22, 2016
0
Lovely hike!
<p>I enjoyed that we had the entire trail to ourselves and being that it was very well marked, I would recommend it to anyone that is not afraid of a climbing up some big rocks. You do get rewarded after climbing these rocks with magnificent views!</p>
Laurie
More Reviews
Log in or register to post comments