From the parking area, walk north along the grassy shoulder of the road. Soon, you will see a triple-orange blaze, which marks the start of the Butter Hill Trail. Follow the orange blazes as they bear right, away from the road, and begin to ascend steeply. Soon, views over the Hudson River begin to appear to the right. The mountain across the river is Bull Hill (Mt. Taurus), and the point of land jutting into the river is Little Stony Point.

In 0.2 mile, you'll reach three stone pillars, with a stone foundation behind the pillars. These are the remains of Spy Rock House, the summer cottage of Dr. Edward L. Partridge, who served on the Palisades Interstate Park Commission from 1913 to 1930. The trail now descends slightly, then continues to climb Butter Hill, first gradually, then more steeply. At the top of the steep climb, you'll reach open rock ledges that afford a wide panorama to the east, south and west. Route 9W is visible straight ahead to the south, with the North Ridge of Crows Nest Mountain to its left. The Hudson River is to the east. You'll want to pause here for a little while to enjoy this expansive view, but the best is yet to come. 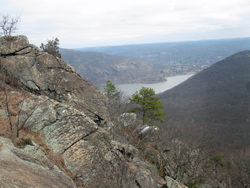 After a short level stretch, the Butter Hill Trail ends at a junction with the yellow-blazed Stillman Trail, also the route of the teal diamond-blazed Highlands Trail (some of the blazes at the junction are blue diamonds). Turn right and follow the Stillman Trail up to the summit of Butter Hill, where a rock outcrop just to the left of the trail provides a 360-degree view. The East Hudson Highlands are visible across the river, with towers marking the summits of Beacon Mountain to the north. Bull Hill is directly to the east. On the west side of the river, the North Ridge of Crows Nest Mountain is directly to the south, with Black Rock Forest visible to the southeast. Schunemunk Mountain may be seen to the west, with the Moodna Viaduct (on the Metro-North rail line to Port Jervis) towering over the valley just north of the mountain. In the distance to the northwest are the Shawangunks and, behind them, the Catskills. To the north, the Newburgh-Beacon Bridge spans the Hudson River.

After enjoying this spectacular view, continue ahead on the yellow-blazed Stillman Trail, which descends slightly. Soon, you'll reach a junction with the blue-and-red-blazed Bluebird Trail, marked by a large cairn. Turn right, uphill, and continue on the Stillman Trail. A short distance ahead, you'll reach the northern end of the blue-blazed Howell Trail, which leaves to the right. Bear left here, continuing along the yellow-blazed trail, which follows a relatively level route for the next 0.7 mile. After a short, steep climb, you'll reach a limited view to the north. About five minutes ahead, though, you'll come to a much better viewpoint looking north over the Hudson River. Pollopel Island is directly below, with the ruins of Bannerman's Castle on its high point. The rail line running along the east shore of the Hudson is Metro-North's Hudson Line (also the route of Amtrak trains to Albany). 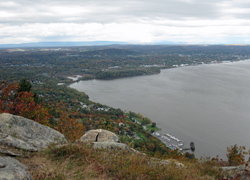 Continue ahead, past the summit of Storm King Mountain, with some more views from rock ledges to the left. After a short descent, you'll reach a panoramic north-facing viewpoint, with superb views. To the east, Breakneck Ridge (marked by the rail tunnel) is visible across the river. The stone building at the foot of Breakneck Ridge (partially obscured by the vegetation) caps a shaft of the Catskill Aqueduct, which tunnels over 1,100 feet below the river. North Beacon Mountain (with communications towers) and South Beacon Mountain (with a fire tower) are to the northeast. To the northwest, the village of Cornwall can be seen along the west bank of the river.

The Stillman Trail now continues to descend, soon reaching a junction with the white-blazed By-Pass Trail. Turn left at this junction and walk about 25 feet to a rock ledge that affords a broad south-facing view down the Hudson River. The village of Cold Spring is visible across the river to the southeast, and Constitution Island juts into the river just beyond.

Now return to the junction and continue along the white-blazed By-Pass Trail, which descends along the side of the mountain, first gradually and then more steeply. There are several views of the river from rock ledges to the left, but they are not as broad as the views from the junction with the Stillman Trail. After crossing a seasonal stream, the By-Pass Trail climbs briefly to end at a junction with the blue-blazed Howell Trail, which comes in from the right.

Bear left and continue ahead on the Howell Trail, which soon begins to follow an old road. In about 500 feet, the blue-blazed trail turns sharply left, leaving the old road, but you should continue ahead on the road, which is now blazed white. The road climbs briefly, then descends steadily. As it approaches Route 9W, the road climbs rather steeply to end just beyond the parking area where the hike began. 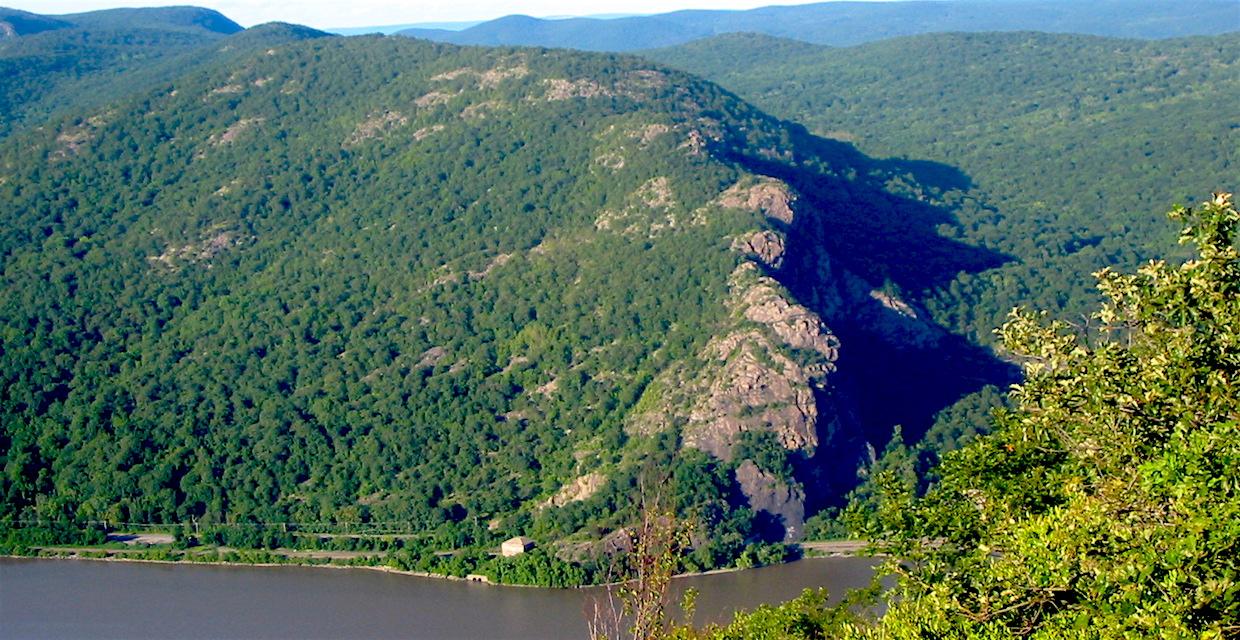 This loop climbs to the summits of Butter Hill and Storm King Mountain, with many spectacular viewpoints over the Hudson River and the Highlands.

From the parking area, walk north along the grassy shoulder of the road. Soon, you will see a triple-orange blaze, which marks the start of the Butter Hill Trail. Follow the orange blazes as they bear right, away from the road, and begin to ascend steeply. Soon, views over the Hudson River begin to appear to the right. The mountain across the river is Bull Hill (Mt. Taurus), and the point of...

Take the Palisades Interstate Parkway to its northern end at the Bear Mountain Circle. Continue north on U.S. Route 9W for 8.1 miles to a parking area on the right at a sharp bend in the road. (This is the second parking area along Route 9W in Storm King State Park, but the only one which is designated by a blue “Parking Area” sign; it has a yellow-on-blue historical marker entitled “Freedom Road” and an adjacent marker commemorating the completion of the Storm King By-Pass Highway.)

rate experience
August 29, 2018
5
Challenging hike with terrific views
This is a very challenging hike with many great views of the Hudson River, the Central Valley, and NYC on a clear day. Trails are well marked. Definitely a hike worth checking out!
alex.truncale
March 22, 2017
5
Awesome views!
Did this hike on the first day of Spring, however it was a week after a major snowstorm and it was more like a midwinter hike. The previous postings all attest to the tough ascent at the start. It was definitely hard, made more so by the 2 feet of snow. Still, taking one's time and using trekking poles made it enjoyable. The views from the two summits were a great reward for the work. Total time with stops for pics, etc.: 2 hours, 10 minutes.
tbtrail
August 28, 2016
0
Very nice
<p>Did this yesterday. Enoyable day out. I say people with dogs, baby carrier on the back, kids all make the trip. Think it'll be taxing for the kids/dogs...but for adults (even out of shape ones) it should be manageable.&nbsp;</p> <p>&nbsp;</p> <p>Identifying the parking lot may be a bit of a problem, but after that it's all simple.&nbsp;</p> <p>&nbsp;</p> <p>Follow the Orange Trail. The starting 15-20 mins is the tough part and has a bit of ascends and rock scrambling. Nothing really difficult though. Near the end of Orange trail you reach woods and safe from direct sunlight rest of the trip.&nbsp;</p> <p>There are 2 overlooks, the first one you see is the smaller one (and most poeple incl us thought that was it) but 5 mins later you reach a ledge with a much bigger view.&nbsp;</p> <p>&nbsp;</p> <p>Continue on forwards through the Blue/Yellow trail and it leads to White Trail. Continue on the whites and you reach the parking lot again.</p> <p>&nbsp;</p> <p>Took us about 3.5 hrs at a very relaxed pace.&nbsp;</p>
MaxTrash
More Reviews
Log in or register to post comments