Turn right and follow the Castle Point Carriage Road, which continues to climb gradually. Soon, you'll reach an open area, the site of a former golf course, with views of the Catskills to the north. After passing a side trail on the left, which leads to the Hamilton Point Carriage Road, there are views to the left over the Palmaghatt Ravine. Soon, you'll reach Kempton Ledge, with excellent views across the ravine and over the Wallkill Valley beyond. The large boulder visible on the other side of the ravine is known as Patterson's Pellet.

The carriage road continues generally uphill, with some short descents and one twisting curve. About two miles from the start, you'll pass under a power line. A short distance beyond, you'll reach a series of open ledges that afford broad views over Palmaghatt Ravine, with the rocky face of Gertrude's Nose - the tip of the escarpment across the ravine - clearly visible.

After some more twists and turns, the carriage road comes out at Castle Point, a steep promontory with panoramic views to the south and east. Lake Awosting is below to the west, and Sam's Point may be seen directly ahead to the southwest (near the communications towers visible in the distance). The elevation of Castle Point is 2,200 feet, and you've climbed over 500 vertical feet from Lake Minnewaska. If it's not too windy, this is a good 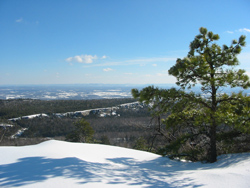 place to take a break.

The carriage road, now joined by the Sharwangunk Ridge Trail, turns right and begins a steady descent, immediately passing the southern end of the Blueberry Run Trail (marked by a sign). In the next three-quarters of a mile, the carriage road makes several sharp turns (skiers should exercise care). At a hairpin turn to the left, the orange-blazed Rainbow Falls Trail (along with the Shawangunk Ridge Trail) leaves to the right. After passing under the dramatic ledges of the overhanging Battlement Terrace, the Castle Point Carriage Road arrives at a junction with the Hamilton Point Carriage Road. Bear right, continuing to follow the Castle Point Carriage Road.

Soon, the Wolf Jaw Trail leaves to the left, and a short distance beyond, you'll reach a junction with the Lake Awosting Carriage Road. To the left, this carriage road leads in about half a mile to a swimming area on Lake Awosting, open during the summer. If you would like to take a swim, turn left at this junction; otherwise, bear right, now following black blazes instead of the blue blazes that have marked the route up to this point. You'll soon reach a beautiful viewpoint to the left over Lake Awosting - another good spot for a break.

At the next junction, the black blazes turn left, but you should continue straight ahead, now following the green blazes of the Upper Awosting Carriage Road. As the carriage road bends to the right ahead, you'll see the impressive cliffs of Lichtfield Ledge. The carriage road soon begins to follow along the base of these cliffs, which often feature hanging icicles in the winter. 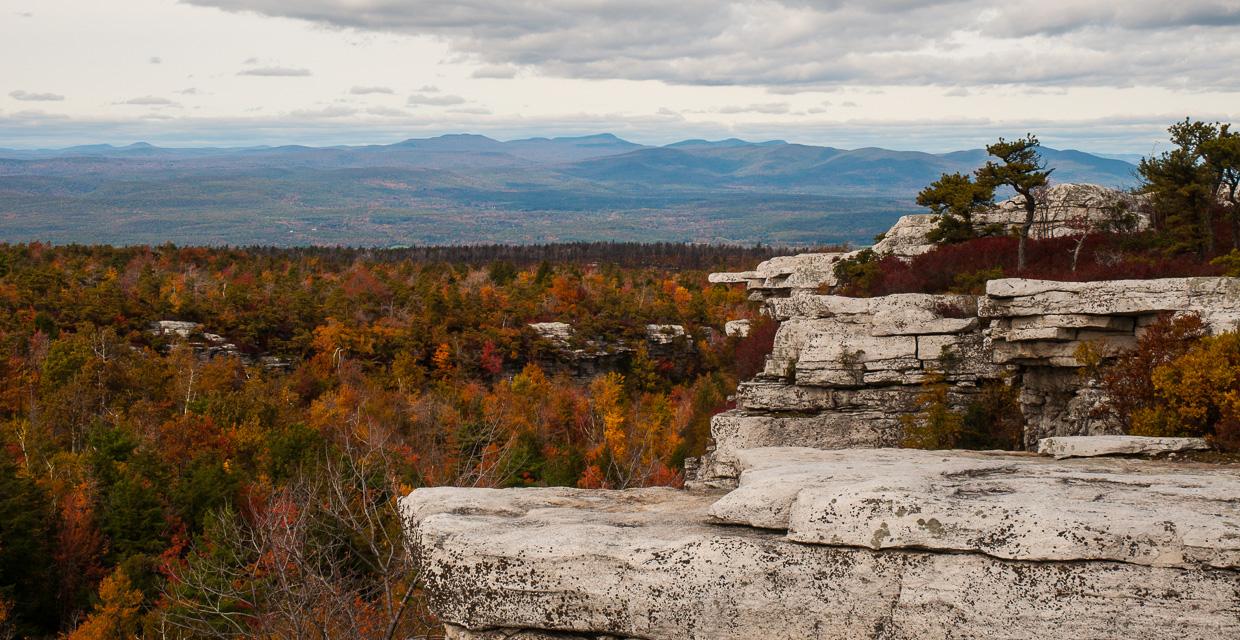 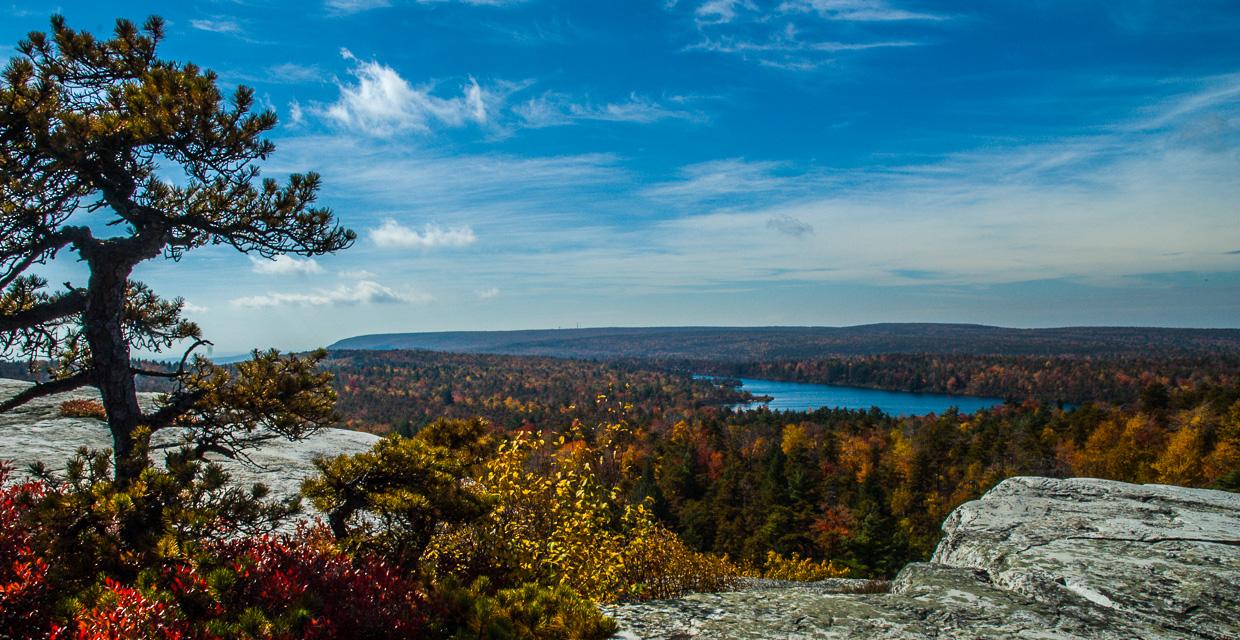 This loop hike, suitable for cross-country skiing, runs along dramatic cliffs of Shawangunk conglomerate, with many fine views.

From the end of the parking area, descend on the red-blazed Lake Minnewaska Carriage Road that encircles Lake Minnewaska. This descent is rather steep for cross-country skiing, but it is not typical of the grades you’ll encounter the rest of the way. After a short descent, you’ll reach a junction with the green-blazed Upper Awosting Carriage Road (a swimming area is on the left, and restrooms...

Take the New York State Thruway to Exit 18 (New Paltz). After paying the toll, turn left onto Route 299 and continue west through the Village of New Paltz. When you cross the bridge over the Wallkill River at the west end of the village, continue ahead on Route 299 (do not turn right towards the Mohonk Mountain House). In another 5.6 miles (from the Wallkill River bridge), Route 299 ends at a T intersection with Route 44/55. Turn right here and follow Route 44/55 as it negotiates a very sharp hairpin turn and climbs to pass under the Trapps Bridge (a steel truss overpass). Continue for 3.0 miles past the Trapps Bridge to the entrance to Minnewaska State Park Preserve, on the left side of the road. A $10 per-person trail fee is charged at the gatehouse when cross-country skiing is available; at other times, a $10 parking fee is charged per vehicle. Turn left just past the gatehouse and continue uphill for 0.4 mile to the parking area at Lake Minnewaska..