At the northwest end of the parking area, you will see a sign for the Castle Loop. This trail will be your route for the entire hike. Follow the white blazes into the woods, bear left at the fork, then (with a kiosk on the left) bear right onto a footpath parallel to a gravel road. After passing a small pond on the right, follow the white blazes as they briefly turn right onto the road (this portion of the road is paved), then turn left onto another woods road (at another sign for the Castle Loop). After passing an interesting rock outcrop on the right, you’ll come to a Y-intersection, where the white-blazed trail bears right and begins to descend.

Soon, the gravel road briefly reappears on the right, but bear left to stay on the white-blazed trail, which follows a rocky woods road over undulating terrain. The road eventually narrows to a footpath and crosses an intermittent stream. After descending on a winding route and once again briefly approaching the gravel road, the Castle Loop heads down to a woods road – the route of the black-square-on-blue-blazed Ramapo Lake Spur. Turn right, now following both white and black-square-on-blue blazes.

Soon, the trails bear left and descend a short pitch to Ramapo Lake (the dam of the lake is just to the left; do not cross it). Here, the black-square-on-blue-blazed Ramapo Lake Spur ends. You should continue ahead onto North Shore Drive (marked by a street sign), following the white blazes of the Castle Loop, now joined by the blue-on-white blazes of the Ramapo Lake Loop (which begins here). The joint trails follow a gravel road along the northeast shore of the lake, passing a private home on the right and then crossing a small stream on a stone-arch bridge, with an attractive cascade on the right.

A short distance beyond, you’ll come to a rock ledge on the left that overlooks the lake. This is a good place to take a break. Once known as Rotten Pond, and later as Lake LeGrande, Ramapo Lake is the centerpiece of Ramapo Mountain State Forest. It was formerly surrounded by private property, but most of the land around the lake was acquired by the state in the 1970s.

Just beyond, the trails reach the northern tip of Ramapo Lake. Here, you should bear right at the fork in the road, now following only white blazes, and pass between two concrete pillars. A short distance ahead, the white-"C"-on-red-blazed Cannonball Trail joins from the left. Just beyond, as the road curves sharply to the right, turn left, leaving the road, and follow the white-blazed Castle Loop Trail as it climbs steadily and rather steeply.

As you approach the top of the climb, bear left onto a rock ledge that offers a spectacular view. Directly below you is Ramapo Lake, with the Wanaque Mountains to the right (west). On a clear day, you can see the New York City skyline on the horizon to the left. You’ll want to pause here to rest from the steep climb and enjoy the view.

When you’re ready to continue, follow the white-blazed trail uphill. After climbing over a stone wall on a step-stile, you’ll reach the ruins of a mansion. Known as Foxcroft, it was built around 1910 by William Porter, a stockbroker. His widow occupied it until her death in 1940, and it fell into ruin in the late 1950s. Use caution if you wish to explore the remains of this once-elegant stone structure.

The trail continues to the north, passing the remains of a concrete swimming pool. Just beyond, the trail bears left and soon reaches an unobstructed west-facing viewpoint over the Wanaque Reservoir and the Wyanokie Mountains. Continue on the white-blazed trail, which climbs to a stone tower. Contrary to what one might think at first glance, this was not a lookout tower; rather, it held a cistern that supplied water to the mansion (note the rusted pipes adjacent to the tower). Just beyond, there is another view from an open rock ledge to the left of the trail over the Wanaque Reservoir to the west. The trail now begins to descend.

Watch carefully as the Castle Loop briefly turns left onto a woods road, then immediately turns right onto a footpath before reaching the route of a gas pipeline. It turns right again onto a woods road, turns left onto a footpath before reaching a wide gravel road, then turns right and follows the gas pipeline for 350 feet. After turning right and leaving the pipeline, the trail crosses a stream and climbs, first gradually, then rather steeply through mountain laurel, to a rock ledge with a broad view. From the ledge, you may be able to see the stone tower you passed about half a mile back.

A short distance beyond, the Castle Loop reaches a paved road, with Skyline Drive just to the left. Turn right onto the road, also the route of the Cannonball Trail (white-“C”-on-red blazes). The trails follow the road for 200 feet, then turn left onto a footpath through the woods. Soon, you’ll reach a junction where the two trails diverge. Turn left and follow the white-blazed Castle Loop along a footpath roughly parallel to Skyline Drive until you reach the parking area where the hike began. 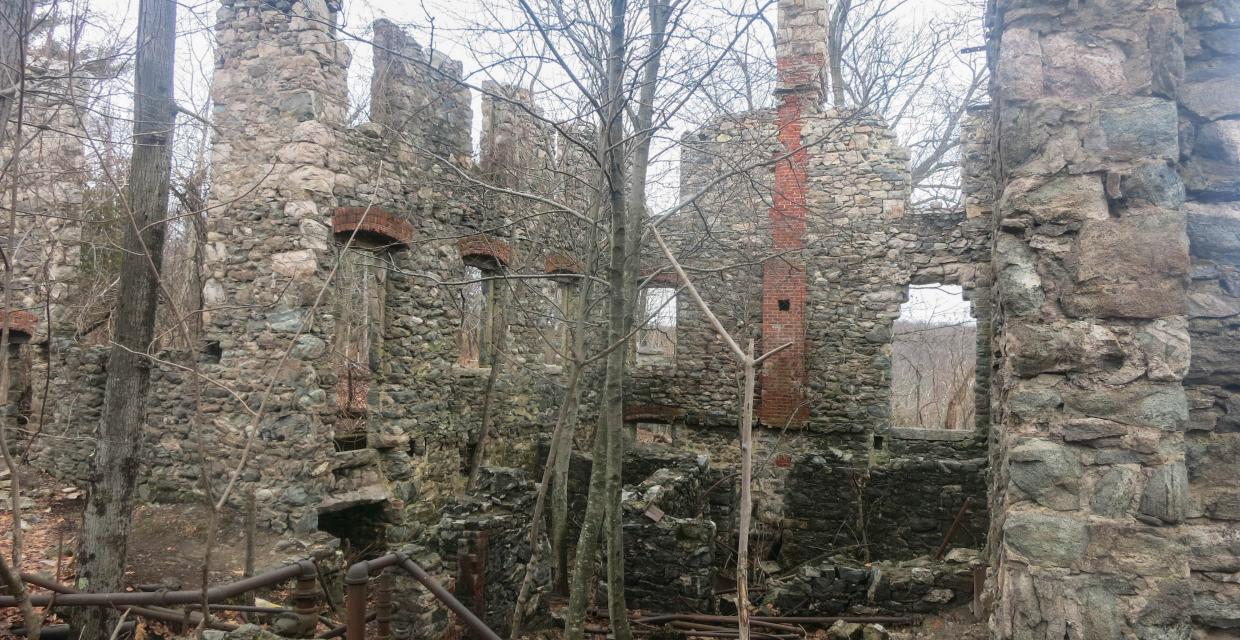 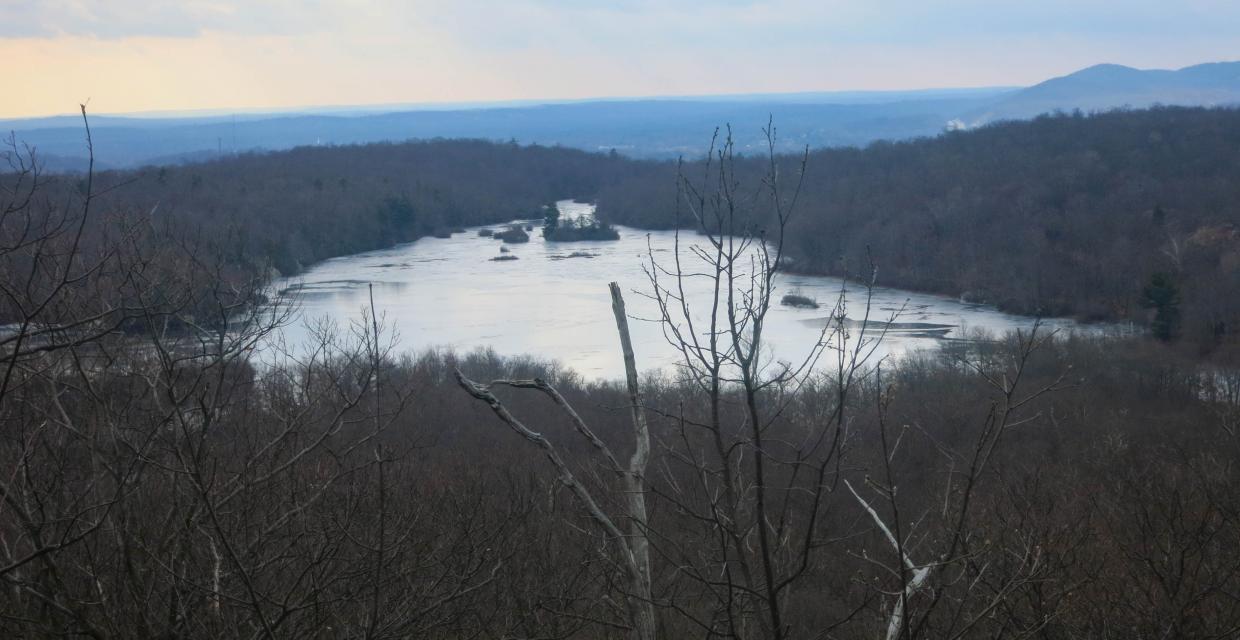 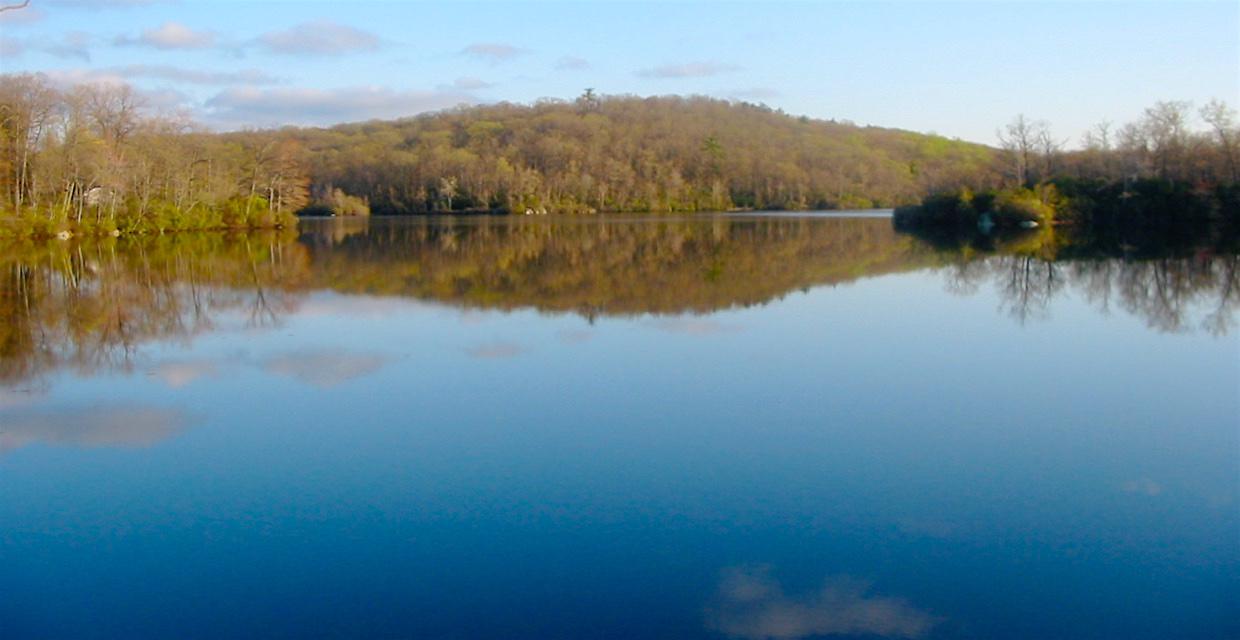 This loop hike runs along the shore of scenic Ramapo Lake and climbs to the ruins of an old stone castle and tower, with panoramic views.

At the northwest end of the parking area, you will see a sign for the Castle Loop. This trail will be your route for the entire hike. Follow the white blazes into the woods, bear left at the fork, then (with a kiosk on the left) bear right onto a footpath parallel to a gravel road. After passing a small pond on the right, follow the white blazes as they briefly turn right onto the road (this...

Take I-287 to Exit 57 (Skyline Drive) and proceed north on Skyline Drive for about one mile to the upper parking area for Ramapo Mountain State Forest on the left side of the road, just beyond milepost 1.4, opposite the entrance to Camp Tamarack.

rate experience
February 29, 2016
0
Great hike with older kids
<p>Just finished this hike yesterday with a group of older Cub Scouts (9-11 year olds) and they loved it.&nbsp; There are a couple of steeper sections so I think it could be a difficult hike for kids much younger than that age group.&nbsp; This loop is designed so that the direction you head is a much easier hike than people we ran into trying to head down the steep sections we were climbing up.</p> <p>The trails are all well marked beside one spot that is windy shortly before you pick up the MacEvoy trial where a couple of trees had recently fallen and we were very briefly uncertain but we figured it out quickly by looking ahead and realizing which direction the later markers were.</p> <p>The hike has lots of interesting views along the way which kept the kids entertained.</p>
schultz
November 13, 2013
0
Virtual Tour of Ramapo Mountain State Forest!
<p>Check out a virtual tour of Ramapo Mountain State Forest on NJUrbanForest.com!</p> <p>http://njurbanforest.com/2013/11/13/hiking-ramapo-mountain-state-forest/</p> <p>Plenty of Pictures!!</p>
njurbanforest
September 15, 2013
0
Thank you for all of the
<p>Thank you for all of the detail!&nbsp; I printed this out and went with my family and we had such a nice time.&nbsp; I think we missed a turn somewhere because it took us 4 hours total and according to our GPS we walked 5 miles, but we didn't mind.&nbsp; This was our first time hiking and we are already looking for our next trail for next weekend!&nbsp;</p>
FizzardOfOz
More Reviews
Log in or register to post comments