Cross to the north side of the road and proceed north on the red-blazed Charcoal Burners Trail (named for the men who felled trees in the area during the nineteenth century and carefully burned them to make charcoal). The trail briefly parallels the road, then bears left and heads into the woods. Soon, you’ll reach the eastern end of the yellow-blazed Perkins Trail, but you should continue ahead on the red-blazed Charcoal Burners Trail. The relatively level trail passes through thickets of mountain laurel, with an understory of blueberry bushes.

In about two-thirds of a mile, you’ll reach a cairn (rock pile) that marks the start of the white-blazed Cabot Trail. Turn left and follow the Cabot Trail, which descends gradually, reaching Jordan Pond in half a mile. Two short side trails lead down to the pond; the second trail (which leaves to the right just beyond the crossing of the pond’s inlet) reaches the shoreline at a rock ledge, with a broad view over the pond. A bench has been placed here for hikers to rest and contemplate the bucolic scene.

Continue ahead on the Cabot Trail, which soon goes by a large rock outcrop and begins to ascend. After passing between old stone walls, the trail emerges onto a clearing. Here, the yellow-blazed Perkins Trail comes in from the left. The Cabot Trail ends here, and you should continue ahead on the yellow-blazed trail, briefly following a wide, grassy road. Watch carefully for a double-blaze, which marks a right turn.

Just beyond, you’ll come to a unlocked gate – the first of several you’ll encounter in this portion of the hike. This section of the trail crosses private property and several active fields, and you are requested to leave each gate in the position (locked or unlocked) that you find it in. Follow the trail as it turns left on a dirt road for about 200 feet, then turns right and reaches a wooden gate (before coming to a road that goes off to the right). After passing through this gate, you’ll emerge alongside an open field – in summer, filled with a multitude of wildflowers. Continue ahead on a footpath, with a fence on the right and an old stone wall on the left, and views to the right over the ridge to the north. You’ll pass a large horse barn on the left. 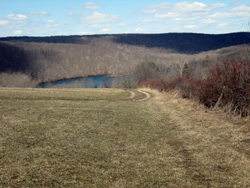 After following a path between two fences, the trail turns right and follows along the right side of another large field, used for growing hay. As you reach the crest of the hill, views appear over a large lake below. After descending for a short distance, bear left on a farm road that crosses the field (to the right, a double yellow blaze on a fence post indicates the turn). Continue along the farm road as it passes another gate and crosses a third field (due to the absence of trees, there are few blazes along this section of the trail). Enter the woods at the end of the field, bear right at the next fork, and emerge onto a fourth field. Here, the trail bears right, skirting the perimeter of the field, then continues along the road, soon re-entering the woods at a gap in a stone wall.

After reaching a limited viewpoint to the north and west from a rock outcrop, the trail begins a steady descent through mountain laurel thickets. Soon, you’ll hear the sounds of traffic, as the trail comes close to Route 301. Near the base of the descent, the trail swings sharply to the right, heads away from the busy road, and begins to parallel Clove Creek. For half a mile, the trail runs along this attractive watercourse. This is about the halfway point of the hike. The trail then bears left, crosses the stream on a wooden bridge, crosses the private Glynwood Road (a little-used dirt road), and climbs rather steeply to a grassy woods road. 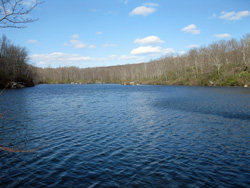 A red-blazed trail begins on the left, but you should turn right to continue along the yellow-blazed Perkins Trail, which follows this grassy road. Soon, you’ll come to a T-intersection, where the yellow-blazed trail turns left. In another 150 feet, it reaches a junction with the blue-blazed Fahnestock Trail. The Perkins Trail turns left here, but you should bear right, leaving the Perkins Trail, and follow the blue blazes of the Fahnestock Trail. A short distance ahead, you’ll pass a large pond to the right, visible through the trees.

Just beyond the northern end of the pond, the trail bears right, crosses the pond’s inlet on a culvert and a moss-covered cement bridge, and begins a steady climb. Watch carefully for a right turn at the crest of the rise, where the trail leaves the woods road and heads into the woods on a footpath. The trail descends a switchback, climbs a rock outcrop, and continues to ascend more gently through mountain laurel. Eventually, it turns right onto a woods road. The trail briefly turns left onto another woods road, then turns right and continues on a footpath through dense barberry bushes.

After a moderate climb, the blue-blazed Fahnestock Trail turns right onto a wide, grassy woods road. A short distance beyond, the red-blazed Charcoal Burners Trail joins from the left. Continue along the joint blue-and-red trail, which descends to Beaver Pond. The trail comes out along the shore of this beautiful pond, with a panoramic view over the pond. This is a good spot to take a break..

The trail now turns right, descends to cross the outlet of the pond, then climbs through highbush blueberry bushes and dense mountain laurel thickets to reach another junction. Here, the blue-blazed Fahnestock Trail turns left, but you should continue ahead and follow the red-blazed Charcoal Burners Trail for about a mile to Route 301, where the hike began. Cross to the north side of the road and proceed north on the red-blazed Charcoal Burners Trail (named for the men who felled trees in the area during the nineteenth century and carefully burned them to make charcoal). The trail briefly parallels the road, then bears left and heads into the woods. Soon, you’ll reach the eastern end of the yellow-blazed Perkins Trail, but you should continue...

From the east end of the Bear Mountain Bridge, proceed north on N.Y. Route 9D for 8.0 miles to Peekskill Road at the southern end of Cold Spring (just beyond the Boscobel Restoration). Turn right and follow Peekskill Road for 0.5 mile to its terminus at a junction with N.Y. Route 301, then turn right and follow Route 301 for 4.6 miles to its intersection with Dennytown Road. Continue on Route 301 for 0.6 mile beyond Dennytown Road, and look carefully for a trail crossing, marked by a brown wand on the south side of the road and a sign for the Charcoal Burners Trail on the north side of the road (there is also a white cross on a rock on the north side of the road, about 50 feet beyond the trail crossing). Park along the shoulder of the road near the trail crossing.

rate experience
May 21, 2017
5
One of my favorites. I
One of my favorites. I usually reverse the direction described, and use the yellow "Perkins" trail all the way back to "Charcol Burners" and the trail-head on RT 301.
dustbinx
April 12, 2014
0
So much variety
<p>This is my favorite hike in Fahnestock park. We hadn't done this hike in a couple of years, so decided it was time to go back. What I like about this hike is that it has a lot of variety. It passes by 3 lakes and parallels a stream. It goes through woods and fields, sometimes with fenced in livestock. It passes by a therapeutic riding center with a beautiful barn. It has some views as well. This hike is a moderate length, and is relatively level. It has a few places that are great for just stopping and enjoying a pond or a view.</p> <p>&nbsp;</p> <p>Some photos: http://www.agiletrekker.blogspot.com/2014/04/charcoal-burnerscabotperkinsfahnestock.html</p>
TrekkerHikes
Log in or register to post comments