At the north side of the parking area, you will notice a triple blaze that marks the start of the Bobcat Trail. Follow this white-blazed trail, which descends steadily through an oak forest with an understory of blueberries. At the base of the descent, it crosses a stream on stepping stones, bears left, and soon begins to follow a faint woods road. About half a mile from the start, the Bobcat Trail ends at a junction with the blue-blazed Howell Trail. Continue ahead on the woods road, which is now quite distinct, following the blue blazes. The trail descends steadily, paralleling a stream in the gorge on the left. As the trail curves to the right, views of Storm King Mountain appear through the trees to the left.

In another ten minutes, the blue-blazed Howell Trail leaves to the left, but you should proceed ahead on the woods road, now following the white blazes of the Stillman Spring Trail, which continues to descend. Soon after crossing a stream on a stone causeway, the trail bears right, crosses a stream on rocks, and turns left to reach the paved Storm King Highway (N.Y. Route 218). You’ve now gone about a mile and a half from the start of the hike – mostly downhill.

Turn right, and follow the road for about 100 feet to a rock with a carved inscription in memory of James Stillman. Just beyond the adjacent Stillman Memorial Spring, you’ll notice three blue blazes above on the hillside. They mark the start of the Howell Trail, which you will be following for the next two miles. Follow the blue blazes as they steeply climb the hillside. The trail bears left and ascends on switchbacks, but the climb remains quite steep.

After about a third of a mile of steep climbing, the trail turns left onto an old woods road that descends slightly. Just before the end of the road at a “pitching point” (once used to toss logs down to the Hudson River below), the trail turns sharply right and climbs stone steps. After climbing some more on switchbacks, the trail comes out at an east-facing viewpoint over the river. Bull Hill is directly across the river, with Little Stony Point jutting into the river, and the village of Cold Spring is to the right.

As you continue your steep climb, more views appear. After following a curved set of rock steps through mountain laurel, you’ll reach a broader viewpoint over the river from a large rock ledge to the left of the trail. Breakneck Ridge is visible to the left, and Constitution Marsh (just south of Cold Spring) may be seen to the right.

Just beyond, as the trail curves to the right and begins to head west, a panoramic north-facing view appears. Storm King Mountain is directly ahead, and the gash carved into the mountain by the construction of the Storm King Highway in 1922 is particularly stark from this vantage point. Pollopel Island, with Bannerman’s Castle, may be seen a little farther upriver.

After some more climbing, the trail reaches another east-facing viewpoint over Bull Hill and Cold Spring from a rock ledge, with Constitution Island jutting into the river to the south. This point marks the end of the steep climb – you’ve climbed 800 vertical feet from the road below in less than a mile! The trail now turns right and descends slightly, then resumes its ascent of the North Ridge of Crows Nest Mountain, but at a much more gradual pace.

In about half a mile, before reaching the highest point on the ridge, the trail bears right and descends slightly. It continues through a valley, levels off, descends steadily, and finally climbs again to reach North Point, with views over the Hudson River and Breakneck Ridge to the east, and Butter Hill and Storm King Mountain to the north. The trail now bears left and soon begins a steady descent through an open area, with an understory of blueberries, scarred by a forest fire in 1999. A curve on Route 9W is visible on the right.

At the base of the descent, you’ll reach the junction with the woods road that you encountered earlier in the hike. The Howell Trail turns right, but you should turn left and follow the white-blazed Bobcat Trail, retracing your steps to the parking area on Route 9W where the hike began. 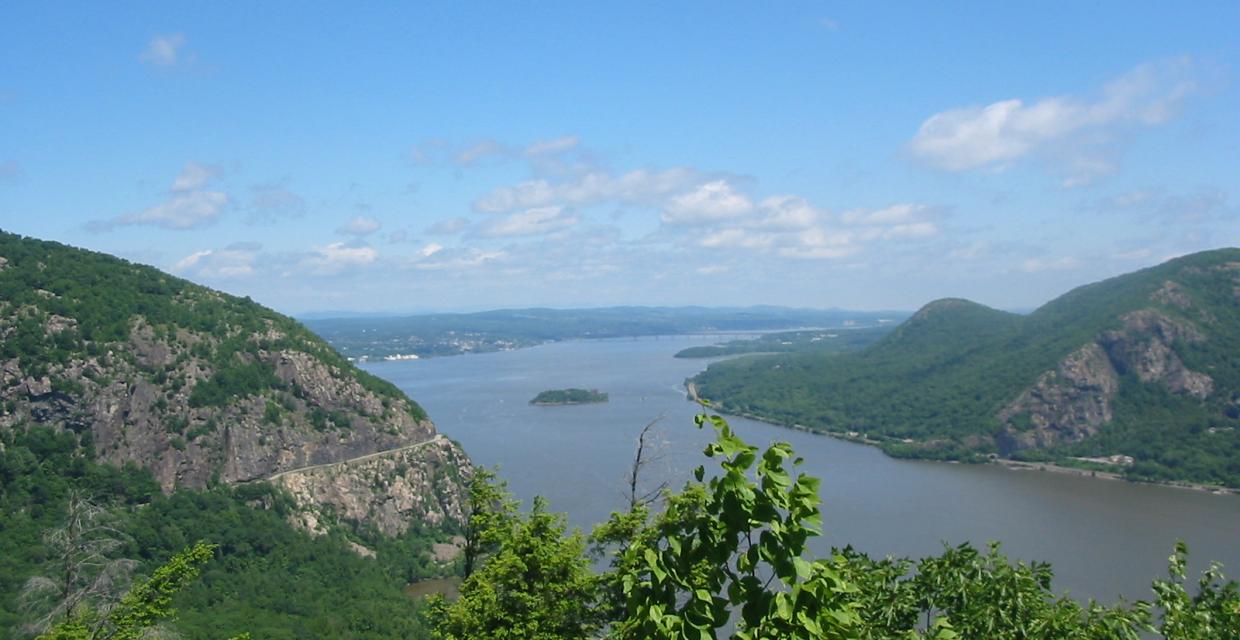 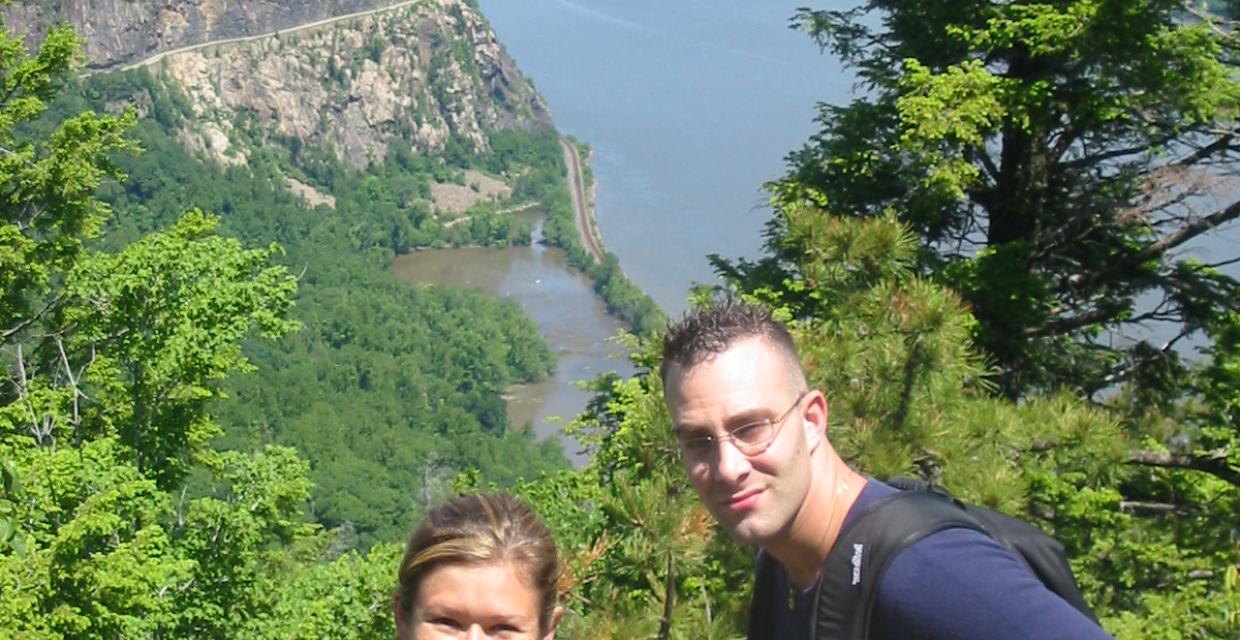 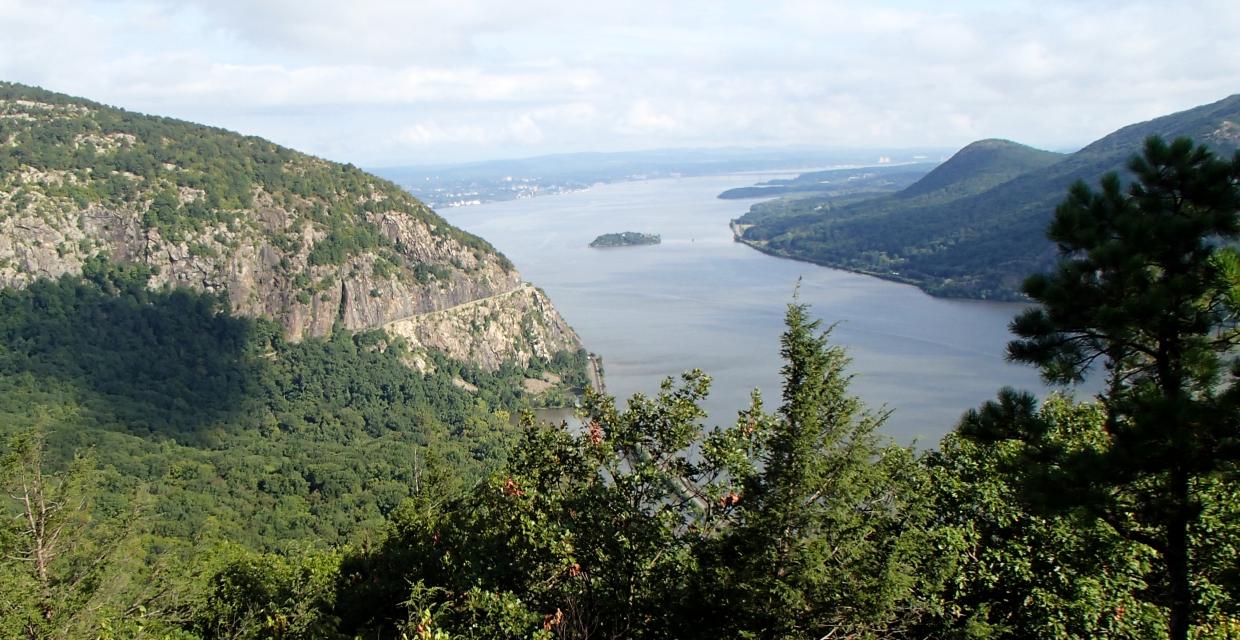 This loop hike climbs to the North Peak of Crows Nest Mountain, with many spectacular viewpoints over the Hudson River and the Highlands.

At the north side of the parking area, you will notice a triple blaze that marks the start of the Bobcat Trail. Follow this white-blazed trail, which descends steadily through an oak forest with an understory of blueberries. At the base of the descent, it crosses a stream on stepping stones, bears left, and soon begins to follow a faint woods road. About half a mile from the start, the Bobcat...

Take the Palisades Interstate Parkway to its northern end at the Bear Mountain Circle. Continue north on U.S. Route 9W for 7.4 miles to a small gravel parking area on the right side of the road. (This is the first parking area along Route 9W in Storm King State Park and is not marked by a sign, although it does have a park bulletin board. It is located 2.3 miles beyond the intersection of Route 9W with N.Y. Route 293, and it is 0.2 mile beyond a blue sign that reads "Parking Area - 1 Mile").

rate experience
June 18, 2019
5
Howell Trail from 9W
Great views all throughout the climb. About 1 mile up the blue trail from 218 I spotted a large black bear grazing on something right in the center of the blaze. Thankfully it didn't see me so I went off the trail and around. Always a good reminder to be alert and be prepared!
SandyDandy
August 03, 2018
5
Still Wonderful, Even in a Downpour
My husband and i did this hike yesterday (Aug. 2, 2018) starting at noon. We got caught in a downpour just as we were starting up from the "Pitching Point!" Nowhere to hide, so we just kept going through intermittent storms. It was still gorgeous, and we got several great photos in the rain, in the clouds, and in the sunshine. This should be rated strenuous, in my opinion.
GenieA1
December 09, 2016
0
Crow's Nest Hike
This is my favorite of all the wonderful hikes in this area, just seven miles south of my home. One thing i think is not stressed enough: After reaching the top of that steep, steep climb from Rt. 218 and then heading north over what i would call a meadow, it can be very confusing if you're not familiar with the hike. It's sparsely blazed and -- what the heck? Now it seems to be going downhill, into a valley, when you know Rt. 9W is "up there" to your left! You might be (I was, during my first hike of Crow's Nest) afraid that you have somehow gotten lost. But trust these directions and stay with it, and you'll find yourself at that fun boulder (now with lots of graffiti on it) that means the rest of the hike is just a stroll. Enjoy!
GenieA1
More Reviews
Log in or register to post comments