Walk back towards the entrance booth but turn right, just before reaching the booth, at a small parking area for "Official Vehicles Only." Just ahead, you'll pass a sign that marks the start of the Ringwood-Ramapo Trail, marked with red-on-white metal blazes (and occasional solid red blazes on brown plastic wands).

The trail enters the woods on a wide woods road, immediately crossing a seasonal stream on a wooden footbridge. You may hear gunshot sounds in the distance. These come from the Thunder Mountain Shooting Range, located less than half a mile south of the Shepherd Lake parking area (you’ll be heading west and north, away from the range). Unfortunately, though, the sounds of gunfire can often be heard for much of the hike.

In a short distance, follow the red-on-white blazed trail as it bears right, leaving the road, and descends on a rocky footpath towards Cupsaw Brook, the outlet of Shepherd Lake. As you reach the base of the descent, you’ll notice an interesting cascade to the right, just off the trail. The trail bears left, parallels the brook, then crosses it on a sturdy wooden bridge (built in 2006 as an Eagle Scout project).

Just beyond the bridge, the blue-blazed Cupsaw Brook Trail joins from the right. Continue ahead, now following both red-on-white and blue blazes on a relatively level footpath. Soon, you’ll cross a seasonal stream on rocks.

In another quarter mile, you’ll come to a T-intersection with a woods road – the route of the white-blazed Crossover Trail. Turn right, now following white, blue and red-on-white blazes, and immediately cross another tributary stream on a wooden footbridge. Just beyond, you’ll reach another junction, where the trails diverge. The Crossover Trail turns left and the Cupsaw Brook Trail continues ahead on the woods road, but you should turn right, now once again following only the red-on-white blazes of the Ringwood-Ramapo Trail.

After crossing yet another tributary stream, you’ll pass an interesting cracked boulder to the left of the trail. The trail continues along a rocky footpath and soon begins to climb steadily. After passing some interesting boulders on the right, the trail briefly dips into a hollow, then continues to climb rather steeply to the top of the ridge of Cupsaw Mountain.

Atop the ridge is a wooden shelter, built by the “Hiking, Eating, Arguing and Puzzle-Solving Club of the Cooper Union.” The land on which the shelter is located, purchased by the State of New Jersey in 1978, was formerly part of the Green Engineering Camp of the Cooper Union for the Advancement of Science and Art, of New York City. Camping is no longer permitted at the shelter, and it is very poor condition.

After resting from the climb, continue ahead on the Ringwood-Ramapo Trail. In about 200 feet, you’ll reach a junction where the Ringwood-Ramapo Trail turns left, but you should continue ahead on a woods road, now following the yellow blazes of the Cooper Union Trail, which comes in from the left. The trail climbs briefly and then descends steadily along the road, with views of the mountains to the west through the trees when the leaves are down. Soon, the sounds of traffic on nearby Sloatsburg Road may be heard.

Just before reaching the base of the descent, be alert for a triple-blue blaze on a tree to the right, which marks the start of the Cupsaw Brook Trail. Turn right and follow this blue-blazed trail, which climbs back up the ridge of Cupsaw Mountain, then descends rather steeply to a T-intersection with a woods road. Turn right onto the road, which levels off. 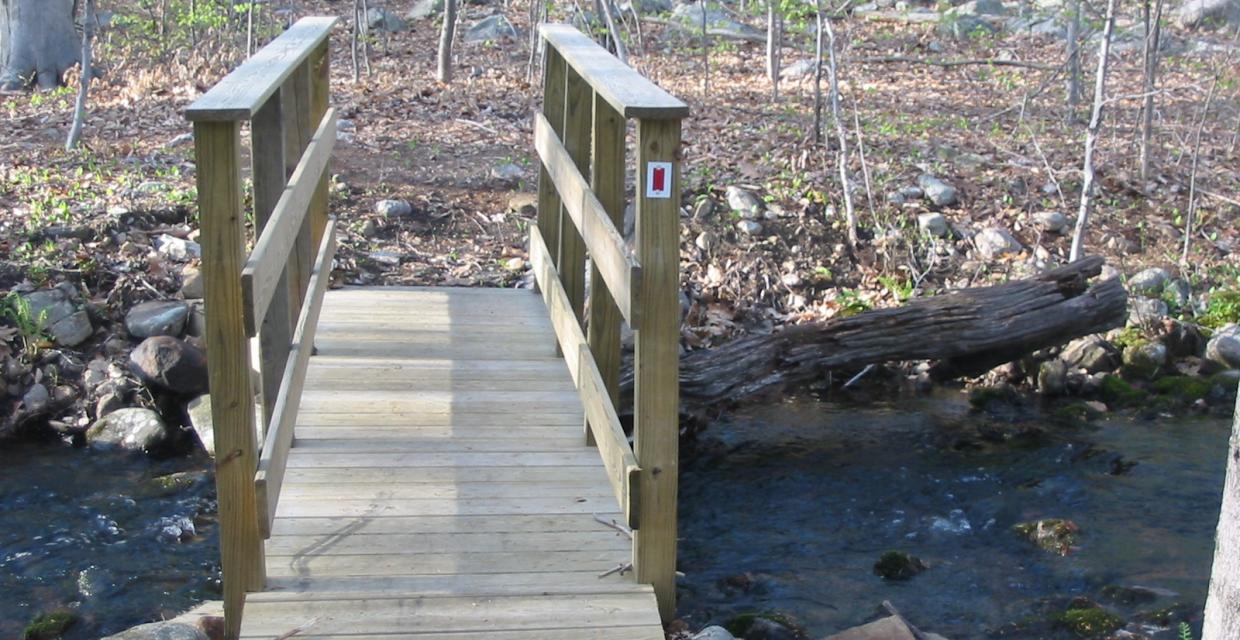 This lollipop-loop hike parallels Cupsaw Brook, passing an attractive cascade, and climbs to a shelter on the ridge of Cupsaw Mountain.

Walk back towards the entrance booth but turn right, just before reaching the booth, at a small parking area for "Official Vehicles Only." Just ahead, you'll pass a sign that marks the start of the Ringwood-Ramapo Trail, marked with red-on-white metal blazes (and occasional solid red blazes on brown plastic wands).

The trail enters the woods on a wide woods road, immediately crossing a...

Take Skyline Drive to its northwestern terminus at Greenwood Lake Turnpike (County Route 511). Turn right, continue for 1.5 miles, and turn right onto Sloatsburg Road. Continue for 2.1 miles and turn right onto Morris Road. In 1.3 miles, just before the entrance to the Skylands section of Ringwood State Park, turn left onto Shepherd Lake Road and proceed for 0.8 mile to Shepherd Lake. Past the entrance booth, bear left and park in the designated parking area (a parking fee is charged from Memorial Day weekend to Labor Day). NOTE: Shepherd Lake is a popular destination on summer weekends, and the parking area can fill up early in the day. Also note that some GPS programs may direct you to the trailhead from Sterling Mine Road in New York State via Shepherd Lake Road. The section of Shepherd Lake Road in New York State is a private road, not open to the public, and the trailhead cannot be reached via this road.

rate experience
June 10, 2012
0
red trail obscured by blowdown
<p>I just hiked this trail today and there is a significant blowdown when trying to follow the red trail up Cupsaw Mountain.&nbsp; The trail markers seem to have all blown down and there is no longer a distinct trail up the mountain.&nbsp; I hiked up to the large gneiss outcrop at the top and followed its ridgeline&nbsp;until it crossed the red trail and I continued the rest of the hike with no problem.&nbsp; Bottom-Line: be prepared to do some bushwhacking up Cupsaw Mountain until the trail is cleared and new trail markers are posted.</p>
pintoj
Log in or register to post comments