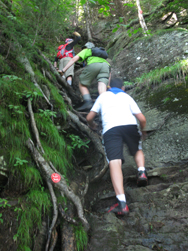 radually, then levels off. The trail crosses two significant streams – one on an interesting rock bridge, and the other on flat rock slabs. After about 1.5 miles, it descends slightly to reach a junction with the Long Path. To the left, the Long Path heads north through the Platte Clove Preserve, but you should turn right to continue on the Devil’s Path.

In another 350 feet, you’ll come to a second junction, where the blue-blazed Overlook Trail begins on the left. Turn right again and continue to follow the red-blazed Devil’s Path, which begins its climb of Indian Head Mountain. You’ll gain about 1,000 feet in elevation in 1.25 miles, as the trail ascends the northeast face of the mountain, with level sections alternating with rather steep climbs.

After passing a large overhanging ledge on the left, the trail climbs very steeply, then descends a little to Sherman’s Lookout – a northeast-facing rock ledge to the left of the trail. The ledge affords a spectacular view over Platte Clove, with Kaaterskill High Peak in the background, and the Hudson River visible in the distance to the right. 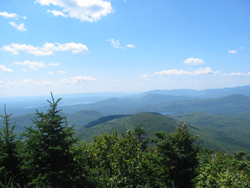 The trail now curves right and heads through a spruce forest, running close to the edge of the escarpment for part of the way. A level stretch is followed by a rather steep climb. After traversing a deep evergreen forest, the trail passes a panoramic south-facing viewpoint on the left, then begins a gradual descent.

At the base of the descent, the trail turns sharply right and climbs very steeply up a cleft in the rock. At the top, an open rock ledge on the right provides another excellent view – this one to the southeast. The knob directly ahead of you is part of Indian Head Mountain (it forms the “chin” of the “Indian,” which you just traversed on the Devil’s Path), and Overlook Mountain (with a fire tower and a communications tower) is on the right. Use extreme caution here, and do not approach the edge.

The trail continues on a relatively level route until, just before reaching a 50-foot rock face, it turns sharply right and climbs steeply through a crevice. The trail soon passes the 3500-foot sign and continues to climb, soon reaching yet another viewpoint from a rock ledge on the left.

The actual summit of the mountain is a short distance beyond the viewpoint. There are no signs to designate this high point, but you’ll know when you’ve reached it, as just beyond, the trail begins a very steep descent. In just half a mile, the trail drops about 500 vertical feet.

At the base of the descent, you’ll come to Jimmy Dolan Notch. Here, the blue-blazed Jimmy Dolan Notch Trail (which descends to a junction with the Devil’s Path near Prediger Road) begins on the right, but you should continue ahead on the red-blazed Devil’s Path, which begins its climb of Twin Mountain. After a while, the climb steepens, and you’ll have to negotiate a 10-foot vertical climb on tree roots.

A short distance beyond, you’ll come to a viewpoint looking back at Indian Head Mountain, which you just climbed, and then you’ll reach the eastern summit of Twin Mountain, with an expansive south-facing view. You’ll want to rest here for a while and take in the view.

The trail now descends a little and then climbs to the western peak of Twin Mountain. This peak, 3,640 feet in elevation, is 80 feet higher than the eastern peak, and a rock ledge just below the summit offers a northwest-facing view over Hunter Mountain. The trail now begins to descend. After passing a rock cave that can afford shelter in bad weather, the trail descends more steeply until it reaches Pecoy Notch, which marks the low point between Twin and Sugarloaf Mountains. Here, the blue-blazed Pecoy Notch Trail, which leads down to the interesting Dibble’s Quarry and Roaring Kill Road, begins on the right, but you should continue ahead on the red-blazed Devil’s Path. The trail now proceeds to climb Sugarloaf Mountain, gaining 1,000 feet in elevation in 1.2 miles and passing a viewpoint that looks over Twin Mountain.

At the summit of Sugarloaf Mountain (elevation 3,800 feet), a short yellow-blazed side trail on the left leads to a panoramic south-facing viewpoint – another good rest stop. The trail now heads west, descending gradually, until it reaches a huge boulder that offers a west-facing view. The descent now steepens. This section of the Devil’s Path is usually covered with ice in the winter, and the descent over huge rocks can be quite difficult (and even dangerous) for those who lack traction aids. Even in warmer months, this descent can be challenging when the rocks are wet and very slippery. 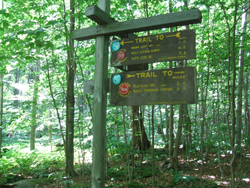 The Devil’s Path now begins a steep climb of Plateau Mountain, climbing about 1,250 feet in the next 0.8 mile. This climb can also be very icy in the winter. At the top of the climb, you’ll come out on a rock ledge with a panoramic east-facing view. Soon afterwards, the trail reaches the viewless summit of Plateau (3,840 feet).

The Devil’s Path continues for 1.5 miles along the long, flat summit ridge of Plateau. This is the longest nearly-level ridge in the Catskills traversed by a marked hiking trail, and it offers a unique hiking experience as you traverse the thick evergreen forest on the trail. In 0.4 mile, you’ll reach a junction with the blue-blazed Warner Creek Trail, which begins on the left, but you should continue ahead on the red-blazed Devil’s Path.

As you approach the western end of the ridge, you’ll come to three panoramic viewpoints. The first two viewpoints offer a view over Kaaterskill High Peak to the east, while the view from the third viewpoint (known as Danny’s Lookout) is to the west, with Hunter Mountain visible straight ahead.

The Devil’s Path now descends to Stony Clove Notch and Route 214. After a precipitous drop over a rock ledge, the grade moderates for a short distance but, for most of the way, the descent is rather steep. You descend a vertical distance of about 1,600 feet in only 1.5 miles, with the grade averaging about 20%. The footing is rocky and uneven, so use caution and take your time, especially if the ground is wet.

At the base of the descent, you’ll reach Route 214. The parking area where you left your first car is just across the highway. This extremely strenuous one-way hike (requiring a shuttle) traverses the four peaks on the eastern half of the Devil’s Path, climbing about 5,000 vertical feet.

Take the New York State Thruway to Exit 20 (Saugerties). After the tollbooths, turn left onto Route 212/32 and, in 0.2 mile, turn right to continue on Route 32. In another 6.0 miles, Route 32 turns right, but you should continue ahead on Route 32A. Follow Route 32A for 1.9 miles to a T-intersection with Route 23A, and turn left. Continue on Route 23A, which climbs through Kaaterskill Clove and passes through the villages of Haines Falls and Tannersville. In 9.2 miles (about 1.5 miles past Tannersville), turn left on Route 214 and follow it for 3.3 miles to a parking area on the right, just south of Notch Lake. Park your first car here.