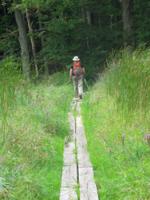 Follow N.Y. 403 or U.S. 9 south to their intersection, at a gas station/convenience store. Here, you will see the white blazes of the Appalachian Trail, which crosses the intersection. Turn right and follow the trail across a meadow on puncheons. At the end of the meadow, the trail goes through a gap in a stone wall and bears left. Soon, the trail turns right and heads gently uphill on an old carriage road.

In half a mile, after crossing a stream, follow the white blazes as they turn left and begin a steeper climb on switchbacks. (Ahead, the carriage road is the route of the yellow-blazed Carriage Connector Trail, which will be your return route.) Near the top of the hill, turn sharply left, joining another carriage road, as the blue-blazed Osborn Loop Trail leaves to the right.

Follow the Appalachian Trail for about a mile along a relatively level carriage road, with a few gentle ups and downs. After a short climb, you’ll notice a cairn and a triple yellow blaze to the right of the trail, marking the start of the Curry Pond Trail. Turn right, leaving the carriage road, and follow the yellow blazes along a footpath. 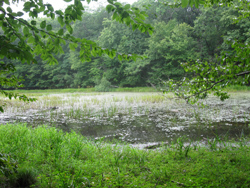 steeply in places, and passes interesting rock outcrops. At the base of the descent, the trail crosses a stream, turns sharply left, then bears right and climbs a little. Next, the trail descends towards Curry Pond, which often resembles a wetland. It crosses the pond's inlet stream, skirts the eastern shore of the pond, crosses the outlet stream, and soon ends at a junction with the blue-blazed Osborn Loop Trail.

Turn right and follow the Osborn Loop Trail north. The trail briefly follows a carriage road, but soon turns right and descends to cross a stream on large rocks. It continues along the side of Canada Hill and, after crossing a few more streams, bears left and begins to ascend. Soon, the climb moderates as the trail parallels an old stone wall on the left. At the top of the climb, the trail bears right, with views to the left through the trees over the Hudson River.

Follow the blue-blazed trail as it descends from the crest of the ridge, first gently, then more steeply, paralleling a stream. At the base of the descent, the Osborn Loop Trail turns right onto a woods road. It briefly climbs, then continues to descend more gradually through mountain laurel and hemlocks. After passing through an area devastated by severe localized storms on May 15, 2018, the trail crosses a stream and climbs gently to reach a junction with the red-blazed Sugarloaf Trail, which is ahead and to the left.

Turn right at this junction, continuing to follow the blue-blazed Osborn Loop Trail. You’re now on a wide, well-engineered carriage road, supported by a stone wall on the right side. In a short distance, you’ll notice an 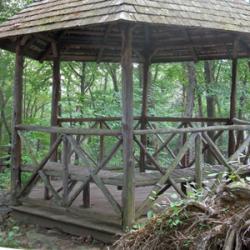 attractive gazebo to the left of the trail – another good place to take a break.

Continue ahead on the Osborn Loop Trail, which continues through the area devastated by the storm. It parallels a stream on the right (mostly obscured by the fallen trees). Just beyond the height of land, you’ll reach a junction. Here, the blue-blazed Osborn Loop Trail turns right, but you should continue ahead on the carriage road, now following the yellow blazes of the Carriage Connector Trail. Bear right at the next junction and continue along the yellow-blazed trail, passing through dense mountain laurel and hemlock. After bearing right at the next two trail junctions, the trail narrows and goes slightly uphill, then levels off and passes a wetland on the right.

When the Carriage Connector Trail ends at a junction with the white-blazed Appalachian Trail, continue ahead along the carriage road, now following the white blazes. Retrace your steps along the Appalachian Trail until you reach the intersection of Routes 403 and 9, then turn left and continue to Cross Road, where you parked your car. This loop hike follows footpaths and carriage roads of a former estate through mountain laurel thickets.

Follow N.Y. 403 or U.S. 9 south to their intersection, at a gas station/convenience store. Here, you will see the white...