Cross the tracks on the pedestrian footbridge. From the south end of the northbound platform, follow a wide path that heads south and then east, entering the Foundry Cove Historic Site. This path follows the route of a rail spur that once served the foundry after which the cove is named. This foundry, which operated here in the 1800s, produced munitions used in the Civil War. After passing a gate on the left, bear left, leaving the wide path, and continue on a blue-blazed trail that leads through the ruins of the foundry.

When you reach a T-junction just below a road, bear left and climb to Chestnut Street. Cross the street and continue ahead on Paulding Avenue . Make the first right onto Pine Street and continue for three blocks to Pearl Street. Turn left onto Pearl Street, cross Main Street, and continue to Secor Street, where Pearl Street ends. Proceed ahead through an unpaved parking area to a kiosk, where the yellow-blazed Undercliff Trail begins.

Follow the yellow blazes of the Undercliff Trail, which bears left, then bears right to cross a small stream on rocks. The trail makes several more turns and soon crosses a wide stream on rocks (this crossing may be a little difficult when the water is high). A short distance after the stream crossing, the green-blazed Nelsonville Trail joins from the right. The two trails run jointly for 0.2 mile. Be careful to follow the yellow-blazed Undercliff Trail as it turns left and leaves the route of the Nelsonville Trail.

The Undercliff Trail soon bears right at a fork and begins a rather steep climb up Bull Hill ( Mt. Taurus ). (In the next mile, the trail will gain about 750 feet in elevation.) About a mile from its start, the trail reaches a viewpoint to the south and east over the Catskill Aqueduct and the Hudson River. This is a good spot to take a break. The trail now descends briefly and continues along the side of the hill, crossing several streams. It bears right, climbs past an attractive cascade, and finally reaches an outstanding viewpoint over the Hudson River, with the Village of Cold Spring visible below to the left and Constitution Marsh beyond.

Continue ahead on the Undercliff Trail, which bears right and soon crosses the white-blazed Washburn Trail. The Undercliff Trail now begins an undulating traverse of the western shoulder of Bull Hill, passing several more viewpoints over the Hudson River. Upon reaching the far end of the shoulder, the trail emerges on a rock outcrop with a sweeping view to the north. Breakneck Ridge is the ragged ridge to the north, and Storm King - with its cut for the highway - is directly across the river.

The Undercliff Trail now turns sharply right and begins to head in a northeast direction. After crossing a stream, it descends on switchbacks to reach the stone foundations of a woods road that was never completed. The trail turns right and proceeds along the road, which soon acquires a dirt-and-gravel surface, crossing a stream on a one-log bridge. After bending to the left, the trail resumes its steady descent, soon beginning to parallel a stream.

About four miles from the start of the hike, the Undercliff Trail turns right, crosses the stream, and reaches a wide woods road - the route of the red-blazed Brook Trail. The Undercliff Trail immediately turns right again and crosses a wider stream on a wooden bridge, but you should bear left and continue on the red-blazed trail along the woods road. After passing a small abandoned building to the right, you'll reach a fork. Bear left here onto the blue-blazed Cornish Trail, which follows an old road through the former estate of Edward G. Cornish, chairman of the board of the National Lead Company.

After passing a large cement-and-rock cistern on the right, the road becomes paved. In another half a mile, the stone ruins of the Cornish mansion are visible below to the right. The old road descends steadily to Route 9D, where it ends. Turn left and follow Route 9D for about half a mile, then bear right onto Fair Street , which branches off to the right. Continue along Fair Street to its end at Main Street, then turn right on Main Street, follow it down to the railroad, turn left and return to the station parking lot where the hike began. 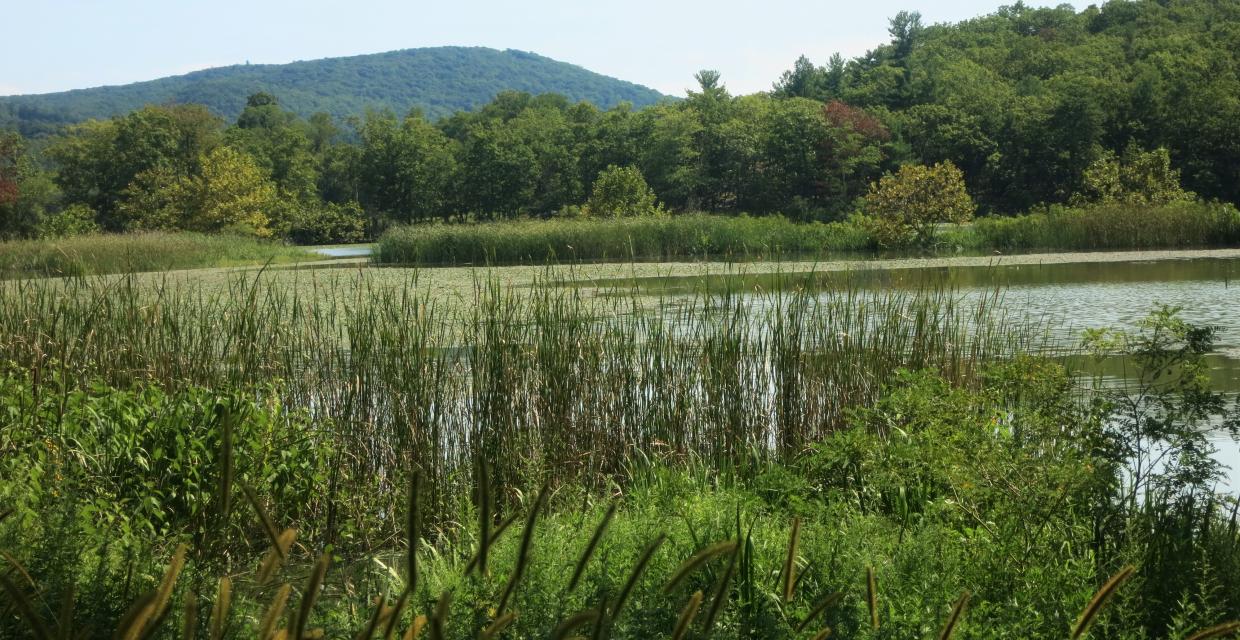 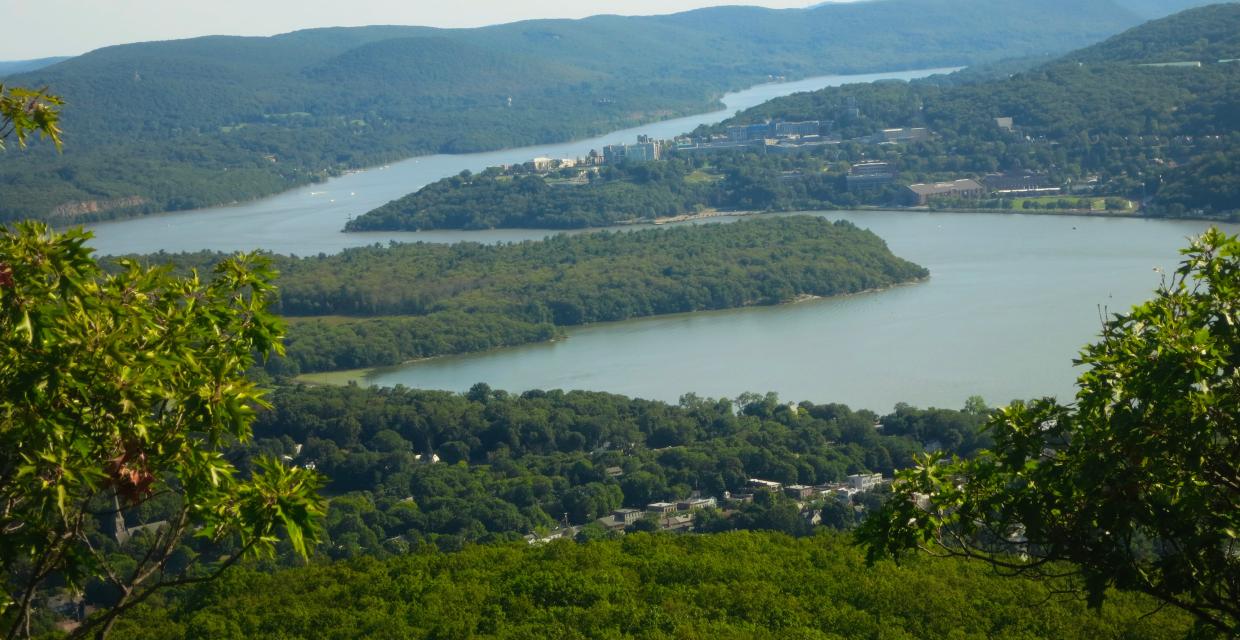 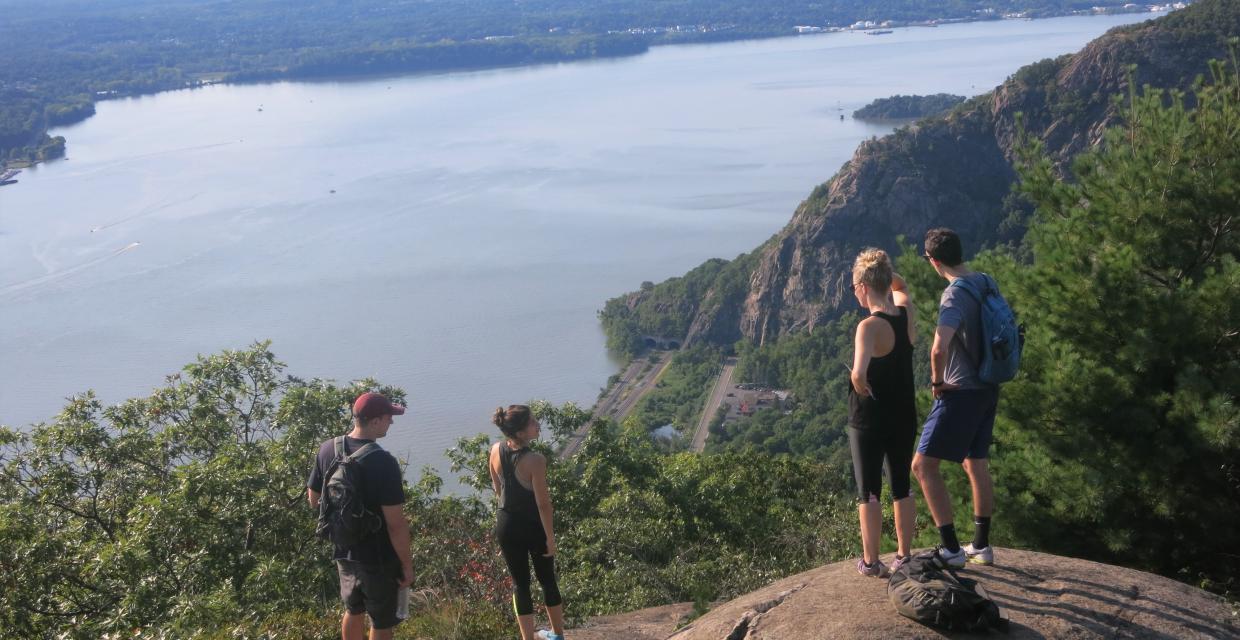 Cross the tracks on the pedestrian footbridge. From the south end of the northbound platform, follow a wide path that heads south and then east, entering the Foundry Cove Historic Site. This path follows the route of a rail spur that once served the foundry after which the cove is named. This foundry, which operated here in the 1800s, produced munitions used in the Civil War. After passing a...

Take the Metro-North Hudson Line to the Cold Spring station.