In two-thirds of a mile, as the Long Path approaches the cliffs and bears left, you'll notice a side trail going off to the right. This trail soon reaches an old concrete-and-steel footbridge which leads out to a narrow rock crag, known as Grey Crag, with views over the Hudson River. The bridge was built many years ago by John Ringling, of the Ringling Brothers' Circus, who once owned a nearby mansion. If you choose to cross this bridge, be careful, as it is narrow and there are no railings. 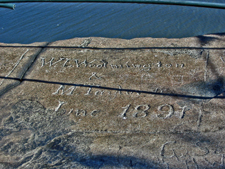 After enjoying the view, return to the Long Path and continue heading north. In a short distance, you’ll notice another side trail on the right. This short trail leads to a north-facing viewpoint up the river, with a waterfall cascading down the cliffs to your right. Just beyond, the Long Path crosses a wooden footbridge over the stream that leads to the waterfall.

In another two-thirds of a mile, the trail begins to run closer to the cliffs, following an old woods road. Soon, you’ll notice fencing along the cliff edge. Several side trails lead towards the cliffs, and you should follow one of them and continue along the fence until you reach Ruckman Point – a rock outcrop with carved graffiti, some of which is more than a century old! This outcrop, which stands 520 feet above the river, offers panoramic views up and down the Hudson, with a particularly dramatic section of the cliffs visible just to the north. In the river, just beyond these cliffs, you may notice some pilings jutting out of the water.These are the remains of the former Forest View marina, abandoned after World War II. You'll be passing the remains of this marina 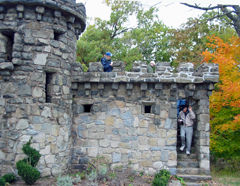 further along on the hike.

When you’re ready to continue, return to the Long Path and turn right. The Long Path now heads away from the cliffs, joining a woods road. In another half mile, the blazes turn right onto a wide woods road. A short distance beyond, the Forest View Trail, marked by blue/white blazes, joins from the left. Continue on the joint Long Path/Forest View Trail, which soon reaches a stone "castle" near the edge of the cliffs. This is the Women's Federation Monument, built in 1929 to commemorate the efforts of these women's groups in the late nineteenth century to save the Palisades from destruction by quarrying. You may wish to climb a narrow flight of stone steps to an overlook atop the monument. This spot also offers outstanding views of the Hudson River below.

After spending some time at this interesting location, continue along the joint Long Path/Forest View Trail, which now begins to descend rather steeply. Just before reaching a stream, you'll come to a trail junction. The Long Path turns left and crosses the stream on a wooden footbridge, but you should turn right, following the blue/white-blazed Forest View Trail. A sign indicates that it is 0.3 mile from this point to the Shore Trail, but the distance will probably seem longer, as the first part of the descent - over rock steps built by the park in the early years of the twentieth century - is very steep.  Use extreme caution when descending these steps, as they are somewhat uneven and can be particularly hazardous when wet or covered with leaves. The descent continues on switchbacks, some of which are well graded, but others are rocky and uneven. Take your time negotiating this section of the trail, which is the most difficult portion of the hike.

You'll finally reach the bottom of the descent, marked by three blue/white blazes on a rock. Turn right, and follow the white blazes of the Shore Trail, which leads south along the river. This flat, level section of trail is a welcome contrast to the steep, uneven Forest View Trail that you followed down the cliffs. The noise from cars on the Parkway is now gone, and the only sounds you hear are from waves, boats, trains on the other side of the river, and perhaps an occasional airplane. Along the way, you’ll enjoy some excellent views of the Palisades cliffs on the right.

After passing a viewpoint down the river, with the George Washington Bridge and the New York City skyline visible in the distance, you’ll reach a fork in the trail. The white-blazed Shore Trail takes the left fork, but the right fork, known as the Upper Trail, follows a somewhat easier route. Bear right and follow the Upper Trail, which climbs gradually on a woods road. For the rest of the way to the Alpine Boat Basin, you’ll be following this road, which runs through a pleasant, forested area, about 100 vertical feet above the river. [Note: The first part of the Upper Trail, just south of the intersection with the Shore Trail, was eroded by Tropical Storm Ida, and care should be exercised when traversing this trail section.]

In two-thirds of a mile, you’ll notice remnants of the abandoned Excelsior Picnic Area on either side of the trail. Continue straight ahead at the next fork, where a path leads left, down to the river. In a quarter mile, you’ll reach another junction, where the Shore Trail rejoins from the left. Continue ahead, now once again following the white blazes. Soon, you’ll cross a stone bridge, with a waterfall on the right. A short distance beyond, you’ll notice stone steps climbing the hillside to the right. These steps lead to a bunker once used by the park to store dynamite.

Next, you’ll reach a junction where the orange-blazed Closter Dock Trail begins on the right. Here, you have a choice. If you wish to visit the historic Kearney House at the Alpine Boat Basin, take the left fork, which descends to the house at the north end of the boat basin. Otherwise, bear right here and follow the orange blazes up a stone-lined road, which was once the main road down to the boat basin. When you reach a stone underpass beneath the Alpine Approach Road, the orange blazes turn left, but you should continue ahead, now following the aqua blazes of the Long Path, which lead you back to the parking lot where the hike began. 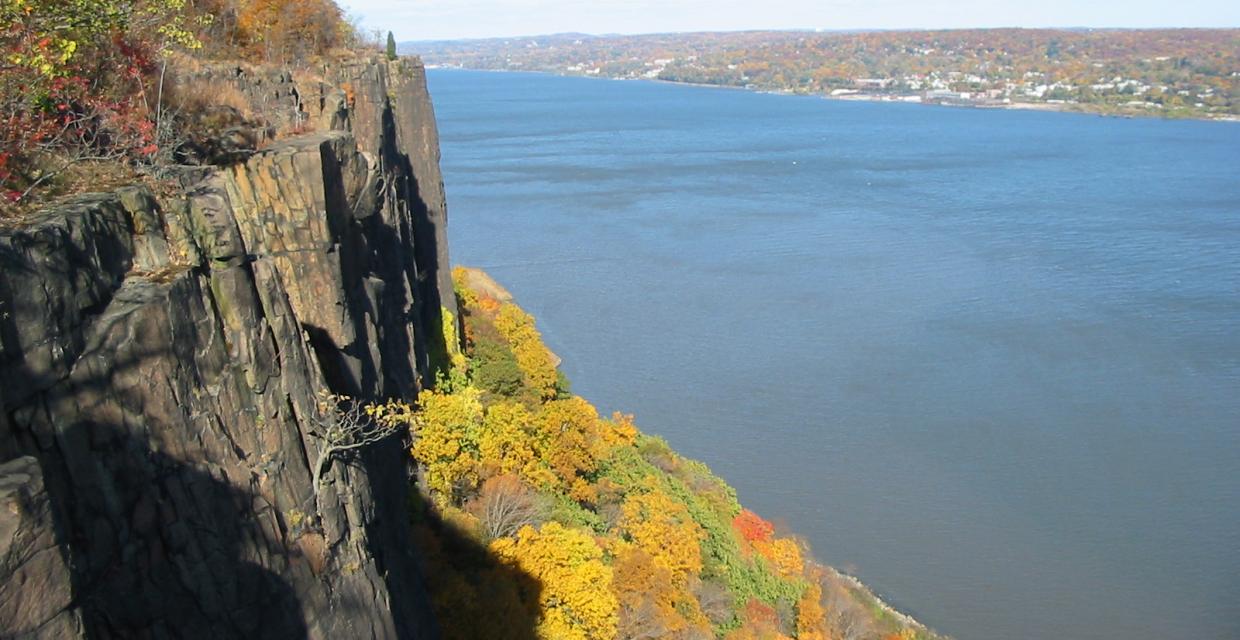 This loop hike combines a walk along the top of the Palisades with a steep descent to the river and a stroll along the river, passing several outstanding viewpoints and the Women’s Federation Monument.

Take the Palisades Interstate Parkway to Exit 2 (Alpine) and follow signs to the Police Headquarters. Park in the parking lot for the park Administration Building (on weekdays, the main parking lot is restricted to park employees, and hikers should park in a gravel parking area on the west side of the Alpine Approach Road).

Take the Rockland Coaches (Coach USA) #9 or #9A bus from the George Washington Bridge Bus Terminal at 179th Street and Broadway in New York City (or the #9T or #9AT bus from the Port Authority Bus Terminal at 42nd Street and Eighth Avenue in New York City) to Closter Dock Road and Route 9W in Alpine, NJ.  Walk north along Route 9W for about 500 feet and turn right onto the orange-blazed Closter Dock Trail, which heads east and proceeds through an underpass under the Palisades Interstate Parkway. After going through the underpass, turn left and follow the joint Closter Dock Trail and Long Path north for 0.2 mile to a tunnel under the Alpine Approach Road. After going through the tunnel, turn left and follow the paved road past the Administration Building to the northern end of the parking lot.  NOTE:  Due to the pandemic, service on the #9 and #9A routes has been severely reduced.  As of March 2022, only very limited weekday rush-hour service is available.