From the southern entrance to the parking area, proceed west, crossing the park entrance road. You’ll notice three blue blazes, which mark the start of the Rocky Ridge Trail, on a utility pole to the right of a chained-off gravel road. Continue ahead along the gravel road. Almost immediately, a branch of the Rocky Ridge Trail departs to the left, but you should continue ahead on the road, crossing under high-voltage power lines. About 500 feet from the start, you’ll notice several sets of triple blazes, which mark the start of the red-on-white blazed Old Cedar Trail and the orange-blazed Hemlock Trail. Turn right onto the joint route of the Old Cedar and Hemlock Trails. 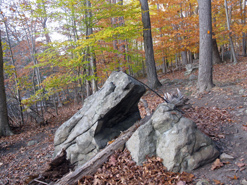 In 400 feet, you'll come to another intersection. Bear left here, leaving the Old Cedar Trail, and continue to follow the orange-blazed Hemlock Trail, which descends towards Fyke Pond, visible through the trees on the left. The trail heads north along the eastern side of the pond, passing an interesting split rock along the way.

Upon reaching the northern end of the pond, the Hemlock Trail climbs an embankment, turns left, and follows a footpath alongside a road that serves as the pond’s dam, with views across the pond. It then turns left, passes a pumphouse, and heads south along the western shore of the pond, soon joining a woods road which comes in from the right. 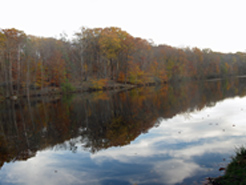 After passing the ruin of a stone building (amid several large fallen trees) on the right, you’ll reach the southern end of Fyke Pond. Just beyond, turn sharply right onto the blue-blazed Rocky Ridge Trail, which begins a gradual climb of Campgaw Mountain. Soon, the green-blazed Beeches Trail begins on the left, but you should continue along the blue-blazed Rocky Ridge Trail.

You’ll soon notice, near the trail, several signs that guide participants in the game of disc golf. The object of this game to throw a disc from a tee to a target in the fewest throws, and a course has been set up adjacent to the trail (you'll pass a tee on the right and a wooden footbridge on the left, which leads to one of the holes of the course). Ahead, you’ll see a series of baskets with yellow flags and dangling chains, which are the “targets” for the game.  Under park rules, hikers on the marked trails have the right-of-way over disc golfers.

Soon, the Rocky Ridge Trail approaches the ski slopes, which are immediately to your right. During the winter, you may see skiers gliding down the slopes and/or snowmaking equipment in operation. The trail bears left, away from the slopes, then turns right and continues to climb along the side of the hill.

At the crest of the rise, the blue-blazed Rocky Ridge Trail turns sharply left. Here, you should proceed ahead, now following a red/blue-on-white connecting trail along the edge of the woods.

In another 250 feet, the connecting trail turns sharply left. Turn right here, leaving the marked trails, and cross the open area to reach an expansive east-facing viewpoint at the top of the ski slope. To the left are the hills of Harriman Park, and in the center is northern Bergen County, with Mahwah in the foreground. The Palisades can be seen on the horizon. This is a good place to take a break. 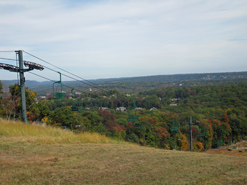 After you've rested a little and enjoyed the view, return to the trail on the southwest side of the clearing, turn right, and continue along the red/blue-on-white-blazed connecting trail, which heads northwest.

In another 400 feet, you’ll come to a complex junction with the red-on-white-blazed Old Cedar Trail and the yellow-blazed Backslope Trail. Turn sharply left and follow the Old Cedar Trail, which briefly parallels an old stone wall, then begins a short descent along the backslope of the mountain. You’re now in a less-used area of the park, away from the ski slopes and the disc golf course. The Ramapo Mountains may be seen through the trees to the west.

After awhile, the Old Cedar Trail climbs back to the crest of the ridge. Here, the blue-blazed Rocky Ridge Trail joins briefly. Bear right where the two trails diverge and continue along the red-on-white-blazed Old Cedar Trail, which begins to descend very gradually. In a short distance, the silver-on-white-blazed Silver Trail begins on the right (at a large cairn), but you should bear left and continue ahead on the blue-blazed Rocky Ridge Trail. Further down, the trail parallels a stream and then crosses it.

At the base of the descent, the Old Cedar Trail turns sharply right at a double-blaze. Turn left here, leaving the Old Cedar Trail, and continue on the green-blazed Beeches Trail. Almost immediately, you'll come upon some of the damage that Hurricane Sandy inflicted to this area in 2012, as the trail weaves its way through a series of cuts in numerous blowdowns.

Soon, you’ll reach a cleared swath of land, which parallels the route of an abandoned bobsled run. Turn right and follow the blue-blazed Rocky Ridge Trail, which descends along this cleared strip. After crossing the red-on-white-blazed Old Cedar Trail at the base of the slope, the Rocky Ridge Trail passes the foundation of a former park building on the left, goes under power lines and skirts a yellow steel gate. It passes to the left of a park building, then turns right and reenters the woods. Soon, it turns right onto a gravel road and ends opposite the parking area where the hike began. This loop hike circles an attractive pond and climbs to the summit of Campgaw Mountain, with a sweeping view of Bergen County.

From the southern entrance to the parking area, proceed west, crossing the park...

Take N.J. Route 208 to the Summit Avenue exit in Franklin Lakes. Turn left at the end of the ramp, following the sign for Franklin Lakes. At the next traffic light, turn left onto Franklin Avenue. Continue to the following traffic light, and turn right onto Pulis Avenue (County Route 3). Follow Pulis Avenue for 1.4 miles and turn left onto Campgaw Road. In 1.5 miles, you’ll pass the Law and Public Safety Institute and the entrance road to the Darlington Golf Course on the right. Just beyond, turn left onto the entrance road leading into Campgaw Mountain County Reservation, which crosses over I-287. When you reach a fork in the road after 0.4 mile, bear left and continue for another 0.2 mile, then turn left and park at the southern end of the main parking area, near a large portable restroom.