This hike explores the 352-acre Hudson Highlands Gateway Park, where the high points were used for signaling during the Revolutionary War. Subsequently, the land was logged to provide fuel for the local iron industry, and it later served as a dairy farm and a quarry. In recent years, this parcel was slated for development, but it was acquired as parkland in 2000 by Scenic Hudson, the Town of Cortlandt and the County of Westchester. In 2016, title to the parcel was transferred to the Town of Cortlandt, subject to a conservation easement held by Scenic Hudson.

From the parking area, cross the road, and proceed through a narrow opening in the guardrail. The blue-blazed Upland Trail begins at a kiosk, which displays a trail map and information on the history of the land that now forms the park. Follow the blue trail across wooden puncheons and uphill through a former gravel pit – now covered with dense vegetation. Soon, you’ll reach a fork, where the loop of the blue trail begins. Turn left to follow the loop in the clockwise direction.

After climbing some more, you'll reach a junction. Here, the red-blazed Annsville Creek Trail continues ahead, but you should turn right and follow both blue and red blazes. After climbing stone steps, you'll reach a junction (marked by post 1) with the yellow-blazed Hudson Overlook Trail, which begins on the right. Turn right onto the yellow trail, which continues to climb.

At the top of the rise, you'll reach a T-intersection. Here, the yellow trail turns left, but you should turn right and follow a trail marked with blue paint blazes 200 feet to a viewpoint from a rock outcrop. Ahead, you can see the road bridge over Annsville Creek and the Hudson River beyond, with the Indian Point nuclear power plant visible along the river.

When you’ve taken in the view, retrace your steps to the yellow trail and continue straight ahead. In a short distance, you'll reach a junction with the blue trail (marked by post 2). Turn right, now following both yellow and blue blazes, and descend rather steeply. At post 5, the blue trail leaves to the right, but you should continue ahead on the yellow trail, which crosses a wet area on puncheons and heads north, weaving around rock outcrops. You may notice, through the trees on the right, a large landfill across Sprout Brook Road.

In a third of a mile, you'll reach another T-intersection (marked by post 4). The white-blazed Vernal Pool Trail begins on the left, but you should turn right to continue on the yellow trail, which descends to cross a stream on rocks and then begins a steady climb. At the crest of the rise, you'll reach (to the left of the trail) a rock outcrop studded with pitch pines, with a west-facing view. Although partially obstructed by vegetation, the view from this overlook is slightly broader, and you can see the Metro-North Railroad bridge over Annsville Creek (beyond the road bridge).

After taking in the view, continue along the yellow trail, which traverses moss-covered rocks and passes a glacial erratic on the right. It descends through hemlocks, passes a cliff on the left, and climbs gradually to end at a junction with the white trail. Turn right onto the white trail, which passes rock outcrops on the right, then turns left and descends through mountain laurel to a hollow. Next, it climbs to a rock outcrop with a northwest-facing view (when there are no leaves on the trees).

The white trail now bears left and begins a steady descent, passing a vernal pool (for which the trail is named) on the left. Soon, the trail bears right, and the descent steepens. At the base of the descent, the trail crosses two streams on rocks, with cascades to the right of the second stream crossing. After briefly paralleling the second stream, the trail crosses a wide stone wall and immediately turns left, heading uphill. It turns left onto a woods road and continues to head uphill until it reaches a junction with the blue trail.

Turn right and continue along the blue trail, which now heads downhill on an eroded woods road (on old maps, this road is called “Old Revolutionary Road”). At one point, the road becomes very gullied, and the trail is routed to the right to bypass this section of the road. As the trail bears left and crosses the road, the busy Route 9 can be seen and heard directly to the right.

The trail now parallels the road on the opposite side, passing some interesting rock outcrops. It then bears right and descends to the road, where it turns left and once again begins to run along the road. Just ahead, the red trail joins from the right. Continue ahead, now following both blue and red blazes. Soon, you'll reach a junction marked by post 1, where the yellow trail begins on the left. Continue ahead, following blue and red blazes. You now begin to retrace the route you followed at the start of the hike.

At the next junction, the red trail turns right, but you should turn left and descend on the blue trail. When you reach the start of the loop of the blue trail, turn right and descend rather steeply. After crossing a wet area on puncheons, you'll arrive at the kiosk on the west side of Sprout Brook Road. Cross the road to reach the parking area where the hike began. 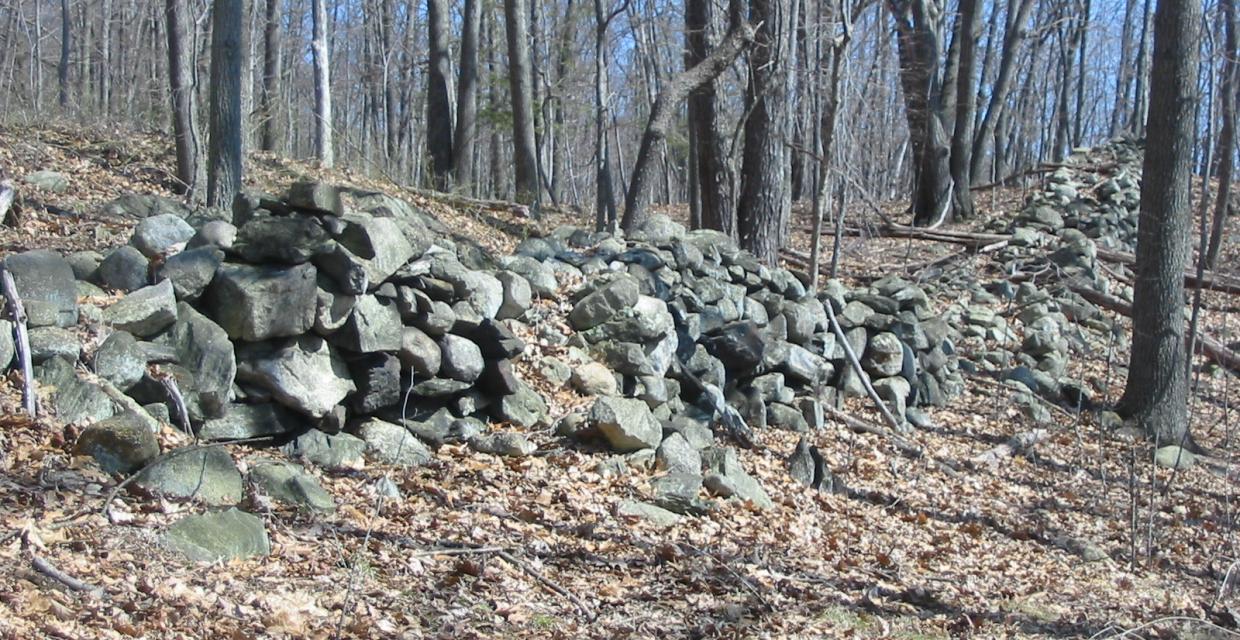 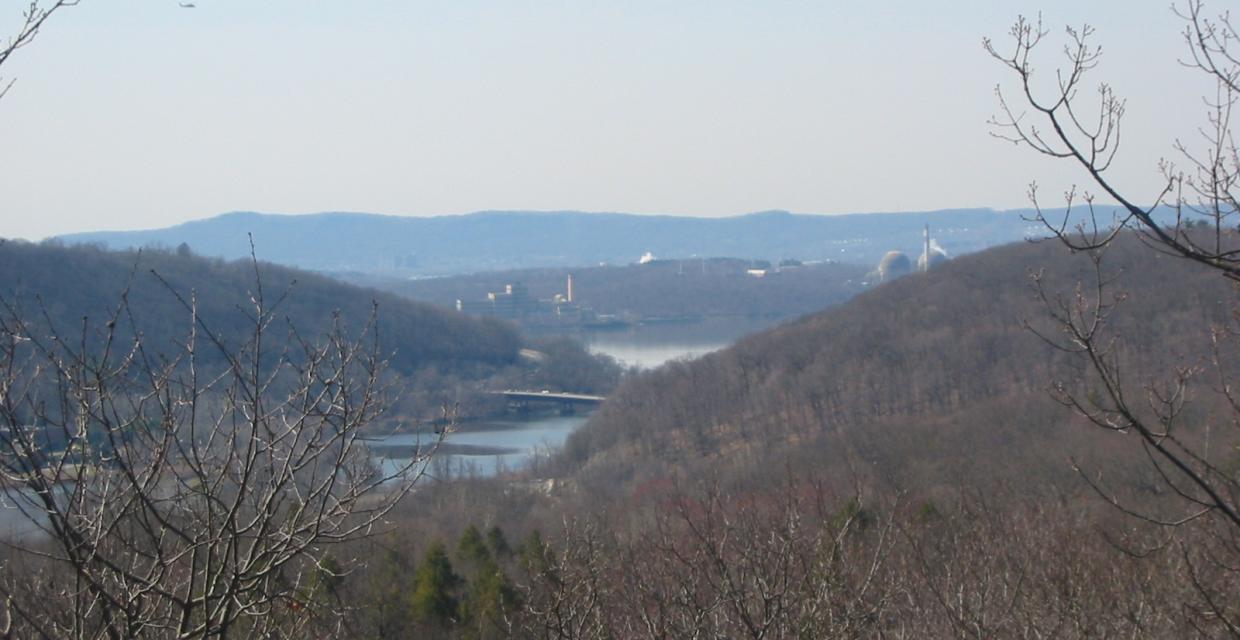 This hike loops through the park, climbing to two viewpoints and crossing several streams with cascades.

This hike explores the 352-acre Hudson Highlands Gateway Park, where the high points were used for signaling during the Revolutionary War. Subsequently, the land was logged to provide fuel for the local iron industry, and it later served as a dairy farm and a quarry. In recent years, this parcel was slated for development, but it was acquired as parkland in 2000 by Scenic Hudson, the Town of...

From the east end of the Bear Mountain Bridge, proceed east on US 6/US 202 for about 3.5 miles to a traffic circle. Take US 9 North, continue for 0.6 mile to the next traffic light, and turn right onto Roa Hook Road. At the next intersection, turn right onto Albany Post Road, then immediately turn left onto Sprout Brook Road. Continue for 0.6 mile, passing ballfields on the right, and park in a large dirt parking area on the right, at a sign for Hudson Highlands Gateway Park.

rate experience
August 09, 2016
0
Recent experience
<p>I just hiked the most of this trail this past weekend (August 6th). Did not do the red trail loop as I was too sweaty and buggy by that time.&nbsp;</p> <p>&nbsp;</p> <p>It's pretty dry right now so none of the pools, streams or cascades were there. Maybe in the spring or fall? Also with all the leaves on the trees most of the overlooks don't show you more than a narrow view. This is probably a great fall hike.</p> <p><br>Trails were fairly well maintained but the white blazed Vernal Pool trail needs some work. A few trees with markers are down and rotting. At one point we lost the trail altogether, more or less at this part in the hike</p> <p><strong><span style="color: #111111; font-family: Verdana, Arial, Helvetica, sans-serif; font-size: 12.16px; line-height: 14.592px; background-color: #edefd9;">After briefly paralleling the stream, the trail crosses a wide stone wall and immediately turns left, heading uphill.</span></strong></p> <p>We ended up heading straight across the area where the streams were and couldn't find the markers to the left. So we walked uphill until we hit a fireroad at the top of the hill, turned left and eventually found the white trail again.&nbsp;</p> <p>&nbsp;</p> <p>There are also a few stretches on this trail and on the blue trail in between the white and red trails where the overgrowth has almost taken over the path. Somene needs to come in with a matchette and clear out the pricker vines that are choking the path.&nbsp;</p> <p><br>For this time of year bring PLENTY of bug spray.</p> <p>&nbsp;</p> <p>FINALLY - the map link available from this pages does not show the white trail at all. It also links you to the East Hudson map pack that you can buy as a digital copy for use with PDFMaps or paper version. I bought the PDF version and unfortunately this part of the park is NOT IN THE MAPS!!!. Very annoying.&nbsp;</p>
gigo08
January 19, 2014
0
Time and distance
<p>The hike claims to be 3 hours and 4 miles. We hiked it today exactly as described and it took 2:40 and the GPS claimed it was 5 miles. Certainly your time may vary based on your pace, but wanted to update the distance estimate.</p>
huffster
September 28, 2013
0
Grateful for update
<p>Was gonna ask re. the current condition of these trails but saw that someone already commented - thanks!</p>
slabelson
More Reviews
Log in or register to post comments