From at a kiosk at the northwest corner of the parking area, follow the aqua-blazed Long Path along the north shore of Lake Skannatati on a rocky footpath through a mountain laurel thicket. In half a mile, the trail bends away from the lake, crosses Pine Swamp Brook, and soon passes a huge rock ledge on the right. About 1.3 miles from the start, you’ll climb to a junction with the yellow-blazed Dunning Trail (laid out in 1933 by Dr. James M. Dunning, a volunteer with the Appalachian Mountain Club). 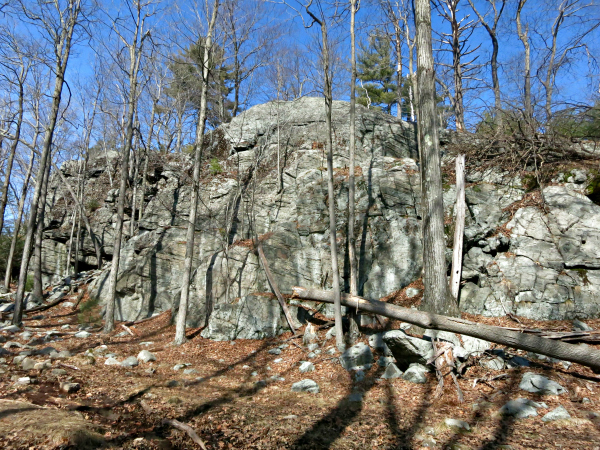 At the base of the descent, you’ll notice stone foundations on both sides of the trail. These are remnants of the village built in the late 1800s to house workers at the adjacent Hogencamp Mine, which was active from 1870 to 1885. According to historian James M. Ransom, there were once 20 houses, several barns, a school and a store in this location.

After crossing a brook, you will observe a stone platform to the left. It was built out of tailings (pieces of rock discarded during the mining process). Piles of tailings may be found throughout this mining site. A short distance beyond, you’ll notice a vertical mine shaft, about 25 feet in diameter, on the right side of the trail. A cast-iron pipe protrudes from the shaft, which is filled with water. Use extreme caution when approaching this open shaft! On the opposite side of the trail, iron rods may be seen protruding from a crumbling concrete base (now covered with grass), with a stone-lined well, three feet in diameter, beyond.

There are many other interesting remnants of mining activity in the area. Those who wish to explore the area more extensively should consult Iron Mine Trails by Edward Lenik (now available from the Trail Conference as an e-book).

Continue south along the Dunning Trail, passing a swamp on the left. The trail soon curves to the right. One section of the old grassy road followed by the trail has been extensively built up using mine tailings. A section of this road was once known as the “Crooked Road,” as it follows many curves around the hills in an attempt to keep the road as level as possible. The lake visible on the left is Little Long Pond.

After a mile on the Dunning Trail, you’ll come to a large bare, rocky area, known as “Bowling Rocks” for the boulders that dot the bare rock. The trail continues through a rather open area, with views to the left over the ridge to the south. 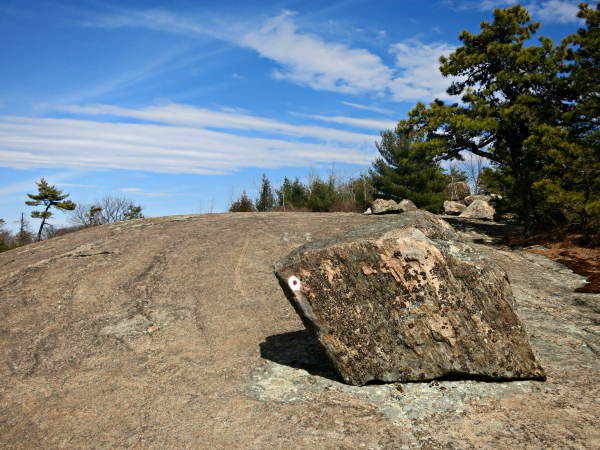 About 0.4 mile from Bowling Rocks, after a short climb, you’ll reach a junction with the red-dot-on-white-blazed Ramapo-Dunderberg (R-D) Trail. (This junction, which is on the crest of a ridge, is easily missed. If you find yourself beginning a long, steady descent, you’ve gone too far and should return to the highest point, where the junction is located.) Turn right and follow the red-dot-on-white blazes northward. You are now at about the halfway point of the hike.

The area just north of the junction was scarred by a forest fire in 2001. It has now started to regenerate, with many large evergreen trees having grown in the interim, but a number of burnt tree trunks are still visible.

A short distance ahead, the R-D Trail crosses a huge open rock surface, known as the Whaleback. Just beyond, look for a plaque on a boulder to the right of the trail. It was placed in memory of George E. Goldthwaite, a member of the Fresh Air Club of New York, who was reputed to have hiked the entire 21-mile R-D Trail in less than five hours – quite a feat for hiking this steep, rocky trail!

The trail now steeply descends a rock face to cross a stream on a log bridge, and it climbs to a junction with the blue-blazed Lichen Trail (which begins on the left). A short distance beyond, the R-D Trail passes beneath a large overhanging rock, known as “Ship Rock” for its resemblance to the prow of a ship.

The trail continues ahead to climb Hogencamp Mountain. The bare rock summit of this 1,353-foot mountain – one of the highest spots in Harriman State Park – affords a wide panorama of the surrounding area. The tower visible straight ahead in the distance is a microwave relay tower for AT&T, located near Gate Hill Road. The trail makes a sharp left turn here and begins a steady descent, soon passing through a young hemlock forest. 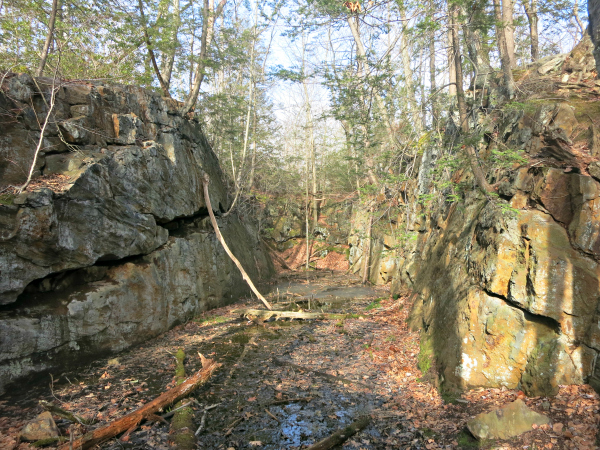 At the base of the descent, you’ll reach “Times Square,” marked by a fireplace next to a huge boulder. It was so named because it is located at the junction of three trails and serves as a popular meeting place for hikers. Turn right here and follow the Arden-Surebridge (A-SB) Trail, marked by inverted-red-triangle-on-white blazes (to be distinguished from the red-dot-on-white blazes of the Ramapo-Dunderberg Trail). The A-SB Trail briefly runs together with the Long Path, but almost immediately bears left and begins a steady descent on an old mining road. In half a mile, it reaches the northern end of the yellow-blazed Dunning Trail, where it crosses a stream below an attractive cascade.

Just beyond the stream crossing, you’ll notice a large rectangular cut in the hillside to the left of the trail. This excavation is part of the Pine Swamp Mine, another mining venture in the area, which was opened about 1830 and was worked intermittently until 1880. As you continue along the trail, several other excavations and open pits (now filled with water) may also be seen. One interesting feature, visible in the second excavation, is a long, round depression in the rock – the mark left by the drill bit used to excavate the mine.

After passing these mine openings, the trail bears right and descends into the woods. Soon, you’ll pass a stone wall and several stone foundations to the left of the trail. These are remnants of the village that once housed the workers at the nearby mine.

The A-SB Trail now passes by the northern end of the Pine Swamp and begins an ascent to a shoulder of Pine Swamp Mountain. After passing a junction with the Red Cross Trail, the A-SB Trail descends to the parking area at Lake Skannatati, where the hike began. Along the way, Lake Askoti may be seen through the trees on the left. This hike leads to interesting remnants of old iron mines and climbs to viewpoints from open rocks.

From at a kiosk at the northwest corner of the parking area, follow the aqua-blazed Long Path along the north shore of Lake Skannatati on a rocky footpath through a mountain laurel thicket. In half a mile, the trail bends away from the lake, crosses Pine Swamp Brook, and soon passes a huge rock ledge on the right. About 1.3 miles from the start, you’ll climb to a junction with the yellow-...

Take N.J. Route 17 north to the New York State Thruway and take the first exit, Exit 15A (Sloatsburg). Turn left at the bottom of the ramp onto N.Y. Route 17 north, and continue through the Village of Sloatsburg. Just past the village, turn right at the traffic light, following the sign for "Seven Lakes Drive/Harriman State Park." Follow Seven Lakes Drive for about 7.8 miles to the parking area for Lake Skannatati, on the left side of the road. The turnoff to the parking area is 0.7 mile beyond the Kanawauke Circle.

rate experience
December 08, 2016
4
Nice moderate hike
I did this hike on November 13, 2016. It was very easy to follow and scenic throughout. Thanks for the great hike description. For a virtual tour of this hike please visit: https://scenesfromthetrail.com/2016/11/14/hogencamp-mountain-harriman-st...
CeeGee
January 25, 2015
0
Nice snowshoe
This hike made a nice showshoe. Only a couple of tricky spots where the snow was covering icy rocks. We've hiked in this area several times. We were glad someone had gone on the R-D trail before us, leaving tracks though. It was a little harder for us to find blazes on it during the winter. Some photos: http://agiletrekker.blogspot.com/2015/01/iron-mines-loop-1-east-in-harriman-bear.html
TrekkerHikes
January 01, 2012
0
Hike has been edited to eliminate erroneous name
After checking the matter a little further, I determined that the swamp to the left of Dunning Trail is not in fact the Pine Swamp.  The hike description has been edited so that it now reads that the trail "passes a swamp on the left."  The description is now entirely correct.
Daniel Chazin
More Reviews
Log in or register to post comments