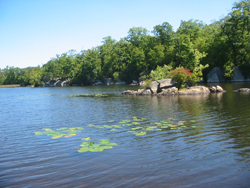 About a mile from the start, you’ll pass the trailhead of the orange-blazed Lake Sonoma Trail on the right. A short distance ahead, you’ll notice a triple yellow/orange blaze on the left, but you should continue ahead on the yellow-blazed Manaticut Point Loop, which descends to cross the inlet stream of Lake Sonoma at a woods road, immediately turns right, and soon reaches a limited viewpoint over the lake. The trail reenters the woods, with views of the lake through the trees, then bears right and reaches a panoramic viewpoint over the lake. Soon, it bears sharply left and heads away from the lake, following a narrow ridge, then turns right onto a woods road.

The Manaticut Point Loop soon turns left, leaving the woods road. It briefly parallels a stream, then crosses it below an attractive cascade. The trail immediately turns sharply left, briefly joining another woods road, then bears right and begins a steady climb. At the top, it bears left, briefly descends, then turns sharply left at a switchback and climbs gently to reach a junction with the white-blazed Overlook Rock Trail, which joins from the right.

Continue ahead, now following both yellow and white blazes. In 150 feet, both trails turn right at a double blaze. Here, you should turn left and make a short, steep climb up a rock ledge, emerging onto Overlook Rock -- a massive exposed rock face. Overlook Rock affords a panoramic east-facing view over Lake Sonoma and Windbeam, Bear and Board Mountains, with the Ramapo Mountains in the background. You've now gone about two miles from the start.

After taking in the view, descend from the rock and turn left onto the white/yellow-blazed trail. In half a 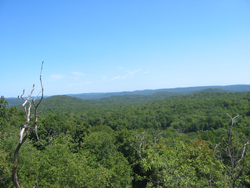 mile, after crossing an intermittent stream and climbing gradually, you'll reach a junction (marked by a single cedar tree) with the blue-blazed Hewitt-Butler Trail at a limited viewpoint to the southwest.

Turn left, continuing to follow the yellow blazes of the Manaticut Point Loop. The trail descends briefly, then climbs steeply to the crest of the ridge. It heads southeast along the ridge, passing viewpoints on the right over Saddle Mountain and then descending gradually. At the base of the descent, there is a small pond on private property to the right.

After climbing through a cleft in the rock, you'll pass on the left the southern end of the yellow/orange-blazed connector trail. Continue along the yellow-blazed trail, which descends a little and then climbs steadily to a panoramic viewpoint from Manaticut Point -- an open rock ledge. Windbeam Mountain is directly ahead (east). To the south, you can see a quarry, with the New York City skyline visible on the horizon on a clear day (the best view of the skyline is from the rock ledge just below the one traversed by the trail).

The trail now descends very steeply. Watch carefully for a double blaze painted on a rock. Here, the pink-blazed West Brook Connector Trail begins on the right, but you should continue to follow the yellow-blazed Manaticut Point Loop, which turns left and continues to descend more gradually. The trail soon bears left and climbs a little, goes through an interesting passage between rocks, then resumes a steady descent. After passing several rock formations on the left and crossing a stream, it climbs to the junction where the Manaticut Point Loop ends. Bear right and follow the black-square-on-yellow blazes of the Manaticut Point Spur Trail, retracing your steps to the trailhead on Crescent Drive, where the hike began. This loop hike goes by Lake Sonoma and climbs to Overlook Rock and several other panoramic viewpoints.

Take Skyline Drive to its northwestern terminus at Greenwood Lake Turnpike (County Route 511). Turn left and proceed south for 1.6 miles to West Brook Road. Turn right onto West Brook Road and cross the Wanaque Reservoir on a causeway. At the next T-junction, turn left and proceed for 0.8 mile to Magee Road. Turn right onto Magee Road and take the first left onto Burnt Meadow Road. Continue for 0.9 mile and turn left at the second intersection with Crescent Drive. Continue for 0.2 mile until you reach a huge boulder and a kiosk on the right side of the road, just beyond a curve. Park along the side of the road.  GPS address: 1 Crescent Drive, Ringwood, NJ 07456.

rate experience
May 07, 2020
4
Much Better This Time Around
After my post in September 2016, my wife and I returned to this hike in early May 2018. As I hoped, all the small streams were running after generous spring rains, adding greatly to our experience. We also found that the trail markings were improved at the first junction where the loop begins, including a directional sign. The leaves were not yet fully grown in, so both short and long distance views were available. I also like the kiosk, which seems quite new. Lastly, I should mention that an advantage of this location is the generous curb length for parking along that undeveloped stretch of Crescent.
glennagrube
September 28, 2016
0
Bear Right at the Four Yellow Blazes
My wife and I much enjoyed this hike on a sunny September day.  We found the driving directions and the trail description to be quite accurate.  The trail head is easy to spot and there is plenty of parking space on this unbuilt section of residential road.  This is a moderate hike, with a few minor steeps and some rocky spots, but my inexperienced spouse handled all with no trouble. We caution others to pay close attention at the split in the yellow blaze trail.  You will see four blazes as described, one pair indicating left and the other indicating a right turn.  We did note that subsequent single blazes for the right hand trail are not easy to spot and the trail in that direction was not very well worn, either.  However, if you pay close attention and follow the right hand footpath, you'll be rewarded soon enough with a nice view of Lake Sonoma.  On the return loop, we met a family that started their hike in the mid-afternoon and they missed this turn, ending up following this hike in reverse - hope they got out before dark. We were also thankful for the warning from a friendly hiker of a mother bear and her cub being in the vicinity.  We did not spot any bear, but we were a bit bothered by a large barking dog that appeared at the top of an adjacent slope where the park must border private property. The best part of this hike was the view from Overlook Rock - a view of green hills near and far barely spoiled by only a hint of a few scattered residential roofs. We look forward to hiking this loop again when the various streams and the cascade are running.
glennagrube
August 28, 2015
0
Hike has been updated
The hike has been updated to include the recent reroute of the eastern end of the Manaticut Point Trail, which you describe in your comment.  Thanks for bringing this to our attention!
Daniel Chazin
More Reviews
Log in or register to post comments