Walk north along Route 32 for 0.2 mile and cross under the trestle. Just north of the trestle, at the end of the guardrail, a driveway goes off to the left. Turn left here and, almost immediately, you’ll see a sign for the Long Path on the left. Turn left again and climb rock steps, then turn left at the top of the first pitch and continue  under the trestle. Immediately turn right, and again climb rock steps until you reach the level of the tracks. Turn left and head north, following along the railroad tracks. Remember that this is an active railroad line, and a bend in the tracks behind you makes it impossible for the engineer of a northbound train to see you. You may find it easier to cross the tracks and head north with the tracks on your left. The Long Path is marked with aqua blazes, but there are relatively few Long Path blazes in the section along the tracks.

A few hundred feet past a dirt road that leads down to an active quarry on the right, and as a chain-link fence begins on the right, watch carefully for a double aqua blaze on the west side of the tracks. Follow the Long Path as it leaves the railroad and turns sharply left onto a woods road. The road briefly parallels the tracks, but just before the road crosses a stream, the Long Path turns right, leaving the road. It crosses an old stone wall and soon bears right at a fork. A short distance beyond, at a T-intersection, the Long Path turns right onto an old woods road. 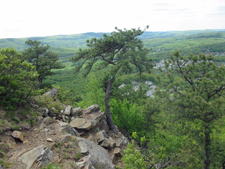 The trail now begins a steady climb, following the woods road for most of the way. After climbing about 500 vertical feet above the railroad, you’ll notice a large rock outcrop on your right. This is Little Knob, which offers an east-facing view.

A little further up, the trail bends right and begins a very steep climb up a rock outcrop. At the top of the outcrop, amid pitch pines, you’ll be afforded a panoramic south-facing view, with a relatively new housing development visible directly below. To the west, you can see the ridge of Schunemunk Mountain, where you’ll soon be headed. You’ve now climbed nearly 1,000 feet from the trailhead, and you’ll want to take a break at this spectacular viewpoint.

The Long Path continues along the relatively flat summit ridge and soon arrives at the summit of the knob, which offers a panoramic view to the north and east. North and South Beacon Mountains and Breakneck Ridge are visible across the Hudson River, and you can see as far north as the Newburgh-Beacon Bridge. To the east, Storm King Mountain and the hills of Black Rock Forest can be seen on the other side of the Thruway. Just below you is the quarry that you passed as you walked along the railroad at the start of the hike.

When you’re ready to continue, proceed ahead across the summit ridge. After descending a little, the trail emerges on the edge of an escarpment, with views of the ridge of Schunemunk Mountain (note the communications antennas along the ridge - you’ll be passing right by these antennas later on in the hike). The trail follows rock slabs along the escarpment, studded with pitch pines, then turns left and descends into a valley.

The trail now climbs a steep, rocky slope and turns right. It soon reaches yet another viewpoint – this one to the north. Beyond this viewpoint, the trail climbs gently to the crest of a ridge. Along the way, a faded red paint blaze and a cairn mark an intersection with an unmarked trail that heads north, roughly paralleling Dark Hollow Brook, but you should continue ahead on the Long Path. After descending a little, the trail turns left and briefly parallels the upper reaches of the brook. It then turns right and climbs steadily to reach an intersection with the Jessup/Highlands Trail on the ridge of Schunemunk Mountain. 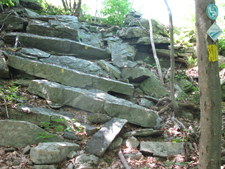 Turn left at this intersection, now following the yellow blazes of the Jessup Trail and the teal diamond blazes of the Highlands Trail, in addition to Long Path logo blazes. You’ll be following these three co-aligned trails for the remainder of the hike, but pay particular attention to the yellow Jessup Trail blazes, as the Long Path and Highlands Trail are marked with their logo blazes only at occasional intervals and at junctions.

For the first part of your hike along the ridge of Schunemunk Mountain, you’ll traverse open slabs of smooth conglomerate rock studded with pitch pines. These open rock slabs alternate with wooded areas. In some places along the ridge, lines of small rocks have been placed to indicate the trail route.

After heading south along the ridge for half a mile, you’ll reach the southern boundary of Schunemunk Mountain State Park (marked by signs on the trees that face the opposite direction). Here, an unmarked side trail leaves to the right. Many other unmarked trails intersect the Long Path in the next three miles, but you should take care to follow the yellow blazes of the Jessup Trail, which continue along the crest of the ridge. In another quarter mile, the trail passes an antenna park on the right.

After bearing right at a fork, the trail curves to the left and heads towards the eastern side of the ridge. Soon, it emerges onto an open rock ledge, with views to the east. In another half mile, the trail turns sharply right, crosses a small stream, and climbs to the crest of the western side of the ridge. Here, you’ll emerge onto a panoramic west-facing viewpoint – the first broad viewpoint to the west from the crest of the Shawangunk Ridge that you’ve encountered on this hike.

For the next mile, the trail follows rather rugged terrain. It descends steeply to a col, then climbs rock ledges and continues along undulating terrain, with a number of ups and downs. Finally, the trail emerges on a rock ledge, with panoramic views on both sides of the ridge – both to the east and to the west. The Shawangunks and the Catskills are visible to the northwest. This is the only viewpoint along the ridge where you can see in both directions.

From this final viewpoint of the hike, the trail descends steadily on a woods road. Be alert for a right turn at a fork, where you leave the main woods road and continue to descend on a narrower road. After descending for about half a mile, the trail reaches paved Seven Springs Road, which is closed to vehicular traffic. Turn right and follow the road for about 500 feet to a gate. Your car is in the parking area for Gonzaga Park, on the right. This hike climbs to several panoramic viewpoints along the ridge of Schunemunk Mountain.

Take the New York State Thruway to Exit 16 and continue on N.Y. Route 17 West. In 2.5 miles, take Exit 130 and turn right at the bottom of the ramp onto N.Y. Route 208. In 0.8 mile, turn right onto Seven Springs Mountain Road (County Route 44), which heads uphill. In 0.9 mile, at a sign for Gonzaga Park, turn left and follow the road uphill for 0.2 mile to a gate, with a parking area on the left. Leave the first car in the parking area.

With the second car, return to the park entrance and turn left onto Seven Springs Mountain Road (County Route 44). In 0.4 mile, bear left to continue on Seven Springs Mountain Road. When you reach a T-intersection with Ridge Road in 2.0 miles, turn left, continuing to follow County Route 44. Proceed for another 1.8 miles until Ridge Road ends at N.Y. Route 32. Turn left and follow Route 32 for 0.8 mile to an intersection with Evans Drive. Park the second car on the grassy shoulder just north of the intersection.

rate experience
July 28, 2014
0
This is a very good hike.
<p>Me and my son did this hike yesterday and it was extremely humid so it definitely made for a strenuous but highly enjoyable hike.</p> <p>The climb up to High Knob is not terrible but it will test your endurance (especially on a day like yesterday)</p> <p>Once you get to the top you're rewarded with a spectacular view of the surrounding areas.</p> <p>There is a lot of climbing on the first half of the hike and some places you might need to use both hands and feet.</p> <p>The trail is well marked and maintained.</p> <p>On the second half of the hike you should really pay attention to where you're stepping because it is very rocky in certain areas.</p> <p>There's many good viewpoints throughout the trail and I will definitely do this one again in the fall.</p> <p>&nbsp;</p> <p>&nbsp;</p>
Sully
Log in or register to post comments