Proceed to a kiosk at the northern end of the parking area and continue north for 250 feet on the Hook Mountain Bike Path. Here, a sign in a grassy area and three white blazes on the left mark the start of the Upper Nyack Trail. This white-blazed trail ascends on a dirt road, passing concrete foundations on the left that afford a view of the Hudson River, and continues uphill on switchbacks. After a level section, it joins a paved road for 175 feet, then turns right, climbs rock steps and continues along the side of Hook Mountain. This magnificent trail section, which weaves through huge rocks at the base of a talus slope, was constructed by the all-volunteer Long Distance Trails Crew of the New York-New Jersey Trail Conference.

After about a mile, the trail crosses a stream on huge boulders, then begins a steady climb. The last section of the climb is mostly on rock steps. After climbing a long stone staircase, the Upper Nyack Trail ends at a junction with the aqua-blazed Long Path.

Turn right onto the Long Path, which follows an old road. Built in the 1870s, this road was planned to continue to the top of Hook Mountain, but it never was completed. Route 9W, which the old road briefly parallels, may be seen and heard through the trees above on the left. Soon, the old road curves away from Route 9W, and the trail narrows to a footpath, with views of the river through the trees. The trail then bears left and begins to climb rather steeply, then more moderately. As you get a little higher, views open up over Upper Nyack, the Hudson River and the Tappan Zee Bridge.

Just beyond, after curving to the left, the trail turns sharply right (avoid the unmarked path leading straight ahead) and climbs a steep, rocky slope, soon reaching the summit of Hook Mountain, with outstanding views over the Hudson River and the Tappan Zee Bridge. Rockland Lake may be seen to the north (through the trees), with the hills of Harriman State Park beyond. On a clear day, the New York City skyline is visible to the south. You’ll also notice several clumps of prickly pear cactus – the only native American cactus that grows east of the Rocky Mountains. You’ve climbed over 700 feet to reach this point, and you’ll want to take a short break, while enjoying the views.

The trail continues straight ahead, descending from the summit and following the ridge of the mountain, with more views over the river to the east. In another third of a mile, at the base of the descent, a yellow-blazed trail leaves to the left. Continue ahead on the Long Path, which now begins to climb again. Along the way, you'll pass several viewpoints to the right of the trail, with Nyack Beach State Park visible directly below. There is a sheer drop of several hundred feet here, so use extreme caution if you approach the cliff edge!

After reaching the crest of the ridge, the trail continues along the ridge, then turns sharply left and begins a steady descent. Soon, it reaches a switchback in an old road and joins the road as the road curves to the right. This well-graded road is a welcome change of pace from the rather rugged ridgetop trail that you've been following for the last mile or so. The Long Path follows the road as it descends gently along the western side of the ridge, then climbs a little.

After a short level section, the river is again visible through the trees on the right. Just beyond, the road bears left and ascends gently. After passing through a gap in a stone wall, the trail begins to descend. Soon, the trail curves to the left and begins a gentle climb. After reaching the crest of the rise, it descends, passing an interesting wide stone wall on the left.

Just beyond, you'll notice a side trail that leads off to the right, but continue ahead on the Long Path. A short distance ahead, after climbing a little, you'll notice another well-defined side trail on the right. Leave the Long Path and follow this side trail past a series of viewpoints, with Croton Point visible across the river. Directly below, at low tide, you can see the remnants of old docks. These docks were once used to transport ice cut from Rockland Lake to New York City.

After passing several viewpoints, you'll notice another side trail that descends to the left. Follow this trail back to the Long Path and turn right. A short distance beyond, follow the Long Path as it curves sharply to the left and descends more steeply on switchbacks. It continues to descend steeply on an eroded footpath. Near the base of the descent, the trail passes a stone foundation. Here, the trail bears right, skirting old concrete foundations, and reaches paved Landing Road.

Turn right, leaving the Long Path, and follow the paved road downhill. As you near the bottom, you'll see the dramatic cliffs of Hook Mountain on your right. Before the park was created in the early 1900s, this was the site of a quarry. Continue along the road as it passes a stone ranger cabin on the left and becomes a gravel road. A short distance beyond, you'll reach a junction with the Hook Mountain Bike Path (also known as the Nyack River Trail), which joins from the left. Paint markings on a rock at the junction indicate that the distance from here to Nyack Beach State Park is 1½ miles.

Continue ahead as the road, now once again paved, descends to the river level, passing the ruins of a small stone building on the right. At the base of the descent, where the road changes again to gravel, there is a picnic area on the left. The road follows right along the river for the rest of the way back to Nyack Beach State Park, passing overhanging rocks and talus slopes on the right. Along the way, there are continual views across the river, as well as more good views of the cliffs. This beautiful, level path is a pleasant way to conclude your hike, although you may have to share the route with bikers and joggers. The path ends at the Nyack Beach State Park parking area, where the hike began. 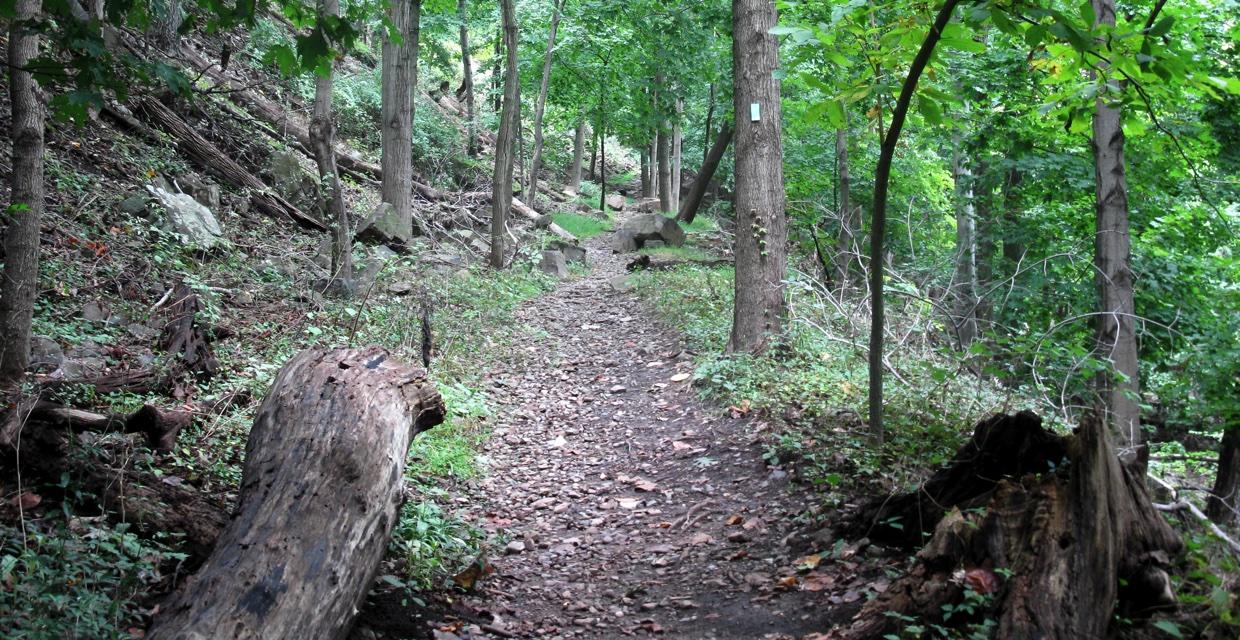 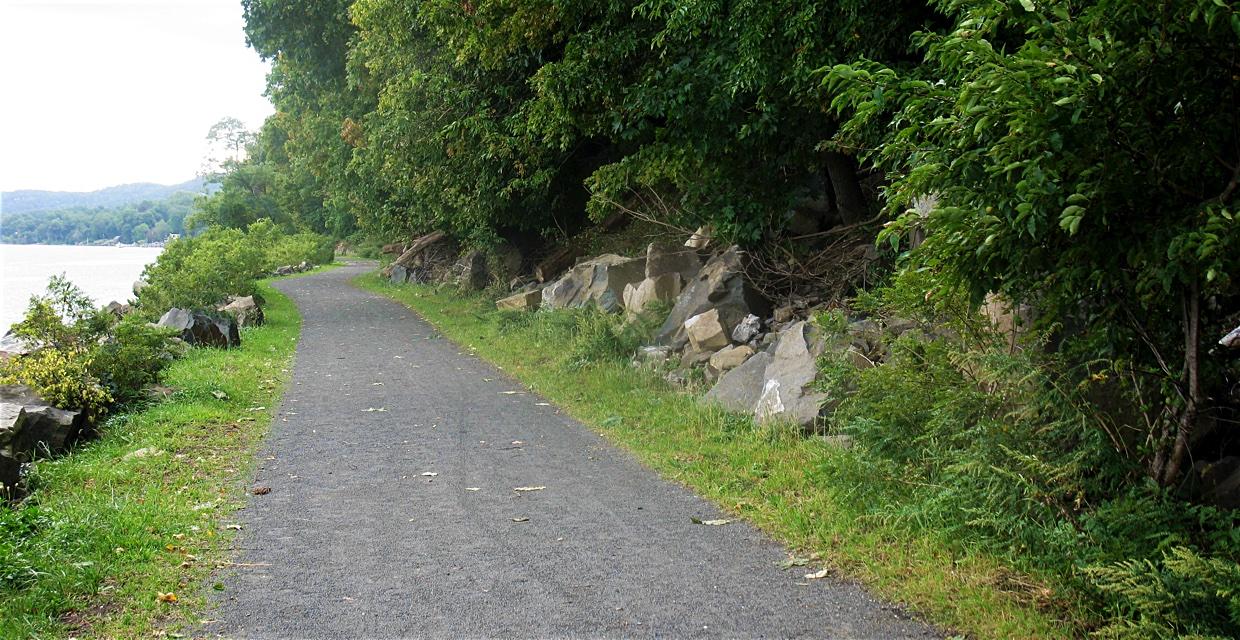 This loop hike climbs to the summit of Hook Mountain on the Long Path, with outstanding views over the Hudson River, and returns via a trail that runs right along the river.

Proceed to a kiosk at the northern end of the parking area and continue north for 250 feet on the Hook Mountain Bike Path. Here, a sign in a grassy area and three white blazes on the left mark the start of the Upper Nyack Trail. This white-blazed trail ascends on a dirt road, passing concrete foundations on the left that afford a view of the Hudson River, and continues uphill on switchbacks....

Take the Palisades Interstate Parkway north to Exit 4, and turn left at the bottom of the ramp onto Route 9W north. In 5.7 miles, bear right onto South Broadway. Proceed north on South Broadway for 3.5 miles (along the way, the name changes to North Broadway) and continue downhill into Nyack Beach State Park (a parking fee is charged on weekends; daily in the summer). Park in the parking area at the bottom of the hill.

rate experience
April 09, 2020
5
Great Hike
This was a great hike! However, once you reach the summit, the trail blazes are yellow - there is no other way to continue. You continue on and then the yellow ends and long path is once again visible...
tekgirl02
August 28, 2018
4
Fun, quick hike! My friend
Fun, quick hike! My friend and I complete it in about three hours with a longish stop for lunch since there were tons of great picnic tables right along the Hudson once you descend.
justalizmartin
March 28, 2017
5
Great Hike
Viewpoints along the cliffs were incredible. Full views of the hudson river and Nyack below. Just make sure to watch your step.
bromli
More Reviews
Log in or register to post comments