From the northern end of the parking area, cross to the east side of Skyline Drive and find a triple purple-on-white blaze, which marks the start of the Tamarack Loop, on a telephone pole. Turn right and follow the Tamarack Loop south for 200 feet along Skyline Drive, then turn left and enter the woods. Continue along the trail as it winds downhill on a rocky footpath and then ascends from a shallow ravine.

In half a mile, the trail turns right onto a woods road, which almost immediately curves to the left. Just beyond, the green-on-white-blazed Todd Hill Loop comes in from the right, and both trails run jointly for a short distance. At a sign for the Todd Hill Loop, turn left, leaving the woods road, and continue to follow the purple-on-white-blazed Tamarack Loop, which heads north on a footpath.

Soon, the Tamarack Loop reaches Todd Lake. The trail follows along the west shore of the lake, passing a rock ledge at lake level with a view over the lake (covered in the summer with water lilies). It then climbs away from the lake and bears left, passing cliffs on the right. Just ahead, the Tamarack Loop turns left, but you should turn right, now following the Yellow Trail (blazed with yellow diamonds), which begins here. The Yellow Trail climbs steeply, then descends steadily to a valley. After going down a rather steep section, the trail crosses a stream on rocks. It bears right, parallels the stream for a short distance, then descends a little more to cross another stream by a small cascade (this stream may be dry if it hasn’t rained lately).

The Yellow Trail turns left, goes under a fallen tree, and begins a steady climb. On the way up, you’ll pass an old stone wall on the right. The trail eventually levels off on a shoulder of the ridge, with glimpses through the trees of Campgaw Mountain to the east.

About two miles from the start of the hike, you’ll reach a fork. Continue on the Yellow Trail, now joined by the white-blazed Millstone Trail. Just beyond the junction, several abandoned millstones in various stages of completion may be seen on the right. This area was once the site of a millstone quarry, and the stones that you see were either damaged during quarrying or abandoned when the operation shut down. One millstone is in nearly perfect condition. This is a good spot to take a break.

Now go back to the fork and bear right, following the white blazes of the Millstone Trail. After climbing a little more, you’ll reach an open area at the crest of the rise, with a huge boulder balanced on several smaller rocks to the right. To the left, there are several patches of prickly pear cactus, which blooms in early July. This is the only native cactus found in northeast United States.

After a brief descent, the trail climbs to the top of Millstone Hill, where there is a viewpoint to the southwest. It then descends, passing to the right of a huge boulder known as “Sitting Hen Rock.” At the base of the descent, the trail turns right and goes through “Rocky Slide Gulch,” a shallow notch. Just beyond, the Millstone Trail crosses the orange-blazed Schuber Trail.

The Millstone Trail now bears right and goes along the edge of the Azalea Swamp. It climbs out of the swamp and soon turns right onto a grassy woods road, beginning a steady descent. After passing a wooden latrine and an interesting rock formation on the right, the trail reaches the Explorer Cabin of Camp Glen Gray. Here, the Schuber Trail briefly joins. (Camp Glen Gray is owned by Bergen County and managed by the Friends of Glen Gray. Cabins and other camp facilities may be rented by interested parties. (201) 327-7234; www.glengray.org.)

Just beyond, you’ll reach the shore of Lake Vreeland. Turn left here, leaving the Millstone Trail, and follow the orange blazes of the Schuber Trail. You’ll go by the Mothers’ Pavilion along the lake shore and head uphill, passing several camp buildings. Just beyond the Gilwell campsite (on the right side of the trail), you’ll notice three red-on-white blazes on a tree, which mark the start of the Matapan Rock Trail.

In another third of a mile, the trails descend on switchbacks to cross a gas pipeline adjacent to Skyline Drive. Just beyond the pipeline, they bear left and re-enter the woods, soon crossing the inlet of a wetland. About half a mile beyond, the yellow-blazed Hoeferlin Memorial Trail leaves to the left, but you should continue ahead on the white-C-on-red-blazed Cannonball Trail.

Just ahead, follow the Cannonball Trail as it crosses Skyline Drive (use care crossing this busy road) and continues along a paved road. Here, the white-blazed Castle Loop joins from the right. The joint trails follow the road for 200 feet, then turn left onto a footpath through the woods. Soon, you’ll reach a junction where the two trails diverge. Turn left and follow the white-blazed Castle Loop along a footpath roughly parallel to Skyline Drive until you reach the parking area where the hike began. 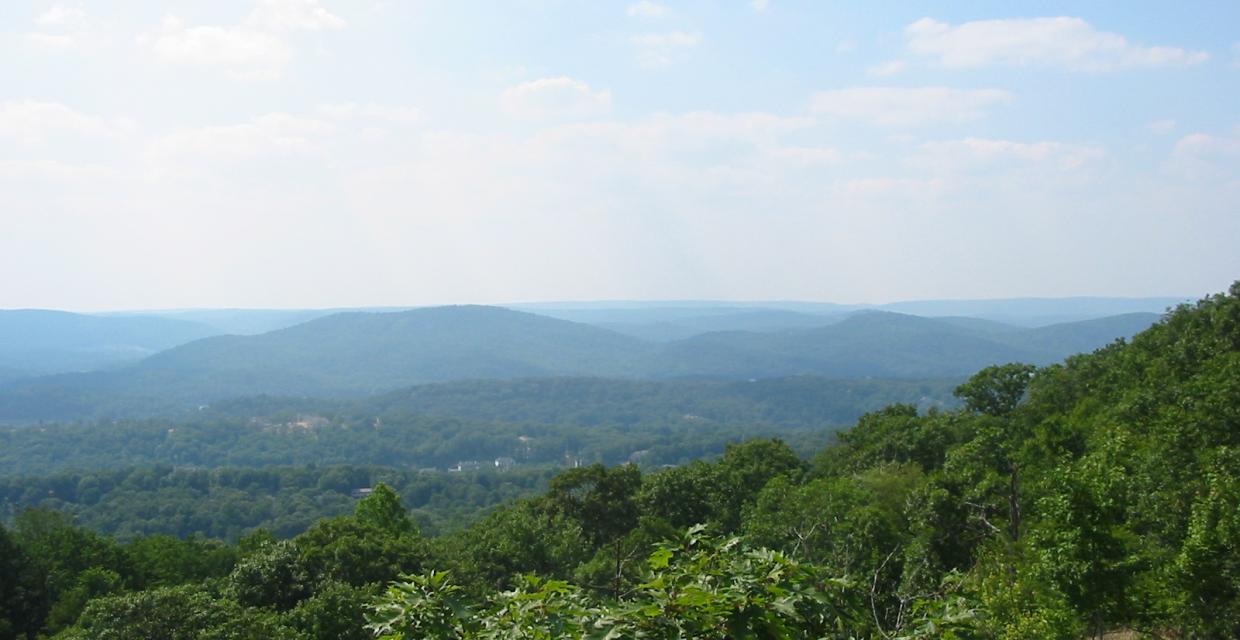 This loop hike passes interesting and historic millstones, goes by two scenic lakes and climbs to a panoramic viewpoint.

From the northern end of the parking area, cross to the east side of Skyline Drive and find a triple purple-on-white blaze, which marks the start of the Tamarack Loop, on a telephone pole. Turn right and follow the Tamarack Loop south for 200 feet along Skyline Drive, then turn left and enter the woods. Continue along the trail as it winds downhill on a rocky footpath and then ascends from a...

Take I-287 to Exit 57 (Skyline Drive) and proceed north on Skyline Drive for a little over a mile to the upper parking area for Ramapo Mountain State Forest on the left side of the road at milepost 1.4.

rate experience
February 05, 2017
4
One place requires attention...
About a half mile from the start, the White Trail turns right onto a woods road. Daniel Chazin's description is accurate, but the turn is not well-marked. Likewise, the turn shortly thereafter onto the Yellow Trail is easy to miss. If you come to a rocky outcrop with a nice view to the south and west, you've gone too far on the White Trail. The only negative for this walk is that the last mile, on the Yellow Trail, is near Skyline Drive. The traffic noise detracts from the walk. It's Super Bowl Sunday and puppy and I saw not even one other person.
jwrushman
Log in or register to post comments