From the parking area, cross Skyline Drive. You will see a triple purple-on-white blaze on a tree, which marks the start of the Tamarack Loop. Turn right onto the gravel road that leads into Camp Tamarack, then immediately turn left and follow the purple-on-white blazes downhill on a winding footpath. At the base of the descent, turn right at a T-intersection, then bear left, skirting the ruins of the former rifle range of the camp. Here, the Tamarack Loop turns right, but you should continue straight ahead, now following the orange blazes of the Schuber Trail. The Schuber Trail crosses a stream on a wooden footbridge, climbs over a knoll and descends to cross a second stream.

About half an hour into the hike, you’ll reach a junction with the white-blazed Millstone Trail. Turn right onto the Millstone Trail, which climbs to Rocky Slide Gulch, where it turns right, then curves left and continues to climb. After a relatively level section, it passes to the left of a huge boulder known as “Sitting Hen Rock” (marked by a sign “HT10"), then bears right and resumes its ascent. Just beyond the crest of the hill, the trail reaches the Southwest Lookout.

From the lookout, the Millstone Trail bears left, descends slightly, then climbs to reach a balanced rock in an open area. Again, the trail bears left and descends. Soon, the Yellow Trail (blazed with yellow diamonds) joins from the right, and both trails pass several abandoned millstones in various stages of completion. This area was once the site of a millstone quarry, and the stones that you see were either damaged during quarrying or abandoned when the quarry operation shut down.

The yellow and white trails continue to descend on a winding footpath, crossing a woods road along the way (marked by a sign “HT12"). Just beyond, a millstone in nearly perfect condition may be seen to the right of the trail. Near the base of the descent, the trails cross another woods road and pass an old stone wall on the right.

The trails cross paved Midvale Mountain Road at Kiosk #4 and reenter the woods. They bear left and head west, parallel to Fox Brook, then turn right to cross two branches of the brook on wooden bridges. The trails now begin to climb, reaching a junction in a level area. Here, the Millstone Trail leaves to the left, but you should turn right, staying on the Yellow Trail. The trail briefly follows an old woods road, then turns left, passing a huge, flat-sided boulder, and heads north, climbing steadily through a wooded valley.

After reaching the crest of the rise, the trail descends briefly and continues along a level woods road. It crosses a stream on a wooden bridge and, just beyond, passes the stone foundations of some old Scout buildings and ruins of an older foundry. Just ahead, it turns right onto a wide woods road (briefly joining the route of the Yellow-Silver Trail). In 100 feet, it reaches the rusted frame of an old water tower. Follow the Yellow Trail as it turns left and begins to ascend, soon passing a stone foundation on a rock ledge.

At the high point of the ridge (996 feet), marked by a post with a sign “HT2,” the orange-blazed Schuber Trail comes in from the left. Here, from a rock outcrop to the right of the trail, is an expansive viewpoint over northern Bergen County. On a clear day, you can see the Manhattan skyline on the horizon to the right. This high point, known as Twin Hill, is a good place to stop and take a break.

When you’re ready to continue, turn right and head north along the ridge on the joint orange and yellow trails, which begin a steady descent. Soon, you’ll notice three green-tulip-tree-leaf-on-white blazes on a post to the left of the trail. They mark the start of the Old Guard Trail. This trail – blazed in 2003 by volunteers of the New York-New Jersey Trail Conference – follows the routes of several historic Scout trails and loops around the Northwest Quadrant of Camp Glen Gray.

Turn left and proceed along the Old Guard Trail, which first traverses a level area, then climbs a little. After descending steadily along a woods road to cross a small stream, it begins a steady ascent, passing interesting cliffs along the way. At the crest of the rise, the trail crosses the route of a gas pipeline. The trail descends steeply from the pipeline and continues to descend more gradually.

After a short climb, you’ll cross the Cannonball Trail, a woods road marked by white-"C"-on-red blazes. The Old Guard Trail continues to climb, rather steeply in places. Reaching the crest of the rise, it descends slightly to cross a stream, then climbs to cross the yellow-blazed Hoeferlin Memorial Trail.

In another quarter mile, the Old Guard Trail reaches a junction with the red-on-white-blazed Ringwood-Ramapo Trail at a west-facing viewpoint from a rock ledge to the right of the trail. The Erskine Lakes are below, with the Wanaque Reservoir in the background. This is a good place for another break.

After a short climb, you’ll recross the yellow-blazed Hoeferlin Memorial Trail. The Old Guard Trail now climbs over a knoll and then descends steadily, following along the side of a hill for part of the way. At the base of the descent, it turns left onto the route of the Cannonball Trail. In 200 feet, you’ll come to a T-intersection with a woods road. Here, the Cannonball Trail turns left, but you should turn right onto the road, continuing to follow the Old Guard Trail, which soon recrosses the gas pipeline. Just beyond, follow the Old Guard Trail as it turns right, leaving the road, and heads south on a footpath, soon passing through thick stands of mountain laurel.

After crossing North Brook on rocks, the Old Guard Trail joins the orange-blazed Schuber Trail, which comes in from the left. The two trails continue along the scenic North Brook. Just past the Tindall Cabin of Camp Glen Gray, you’ll reach a wooden footbridge over the brook at Kiosk #6. Here, the trails diverge. You should turn right and cross the footbridge, continuing to follow the orange-blazed Schuber Trail.

On the other side of the bridge, the Schuber Trail turns left, passing the ruins of the historic Sanders Farm. It goes by the former camp archery range (now a campsite) and rifle range (now designated as McMullen Field) and follows a camp road past several more campsites and cabins. The trail then descends to the shore of Lake Vreeland. 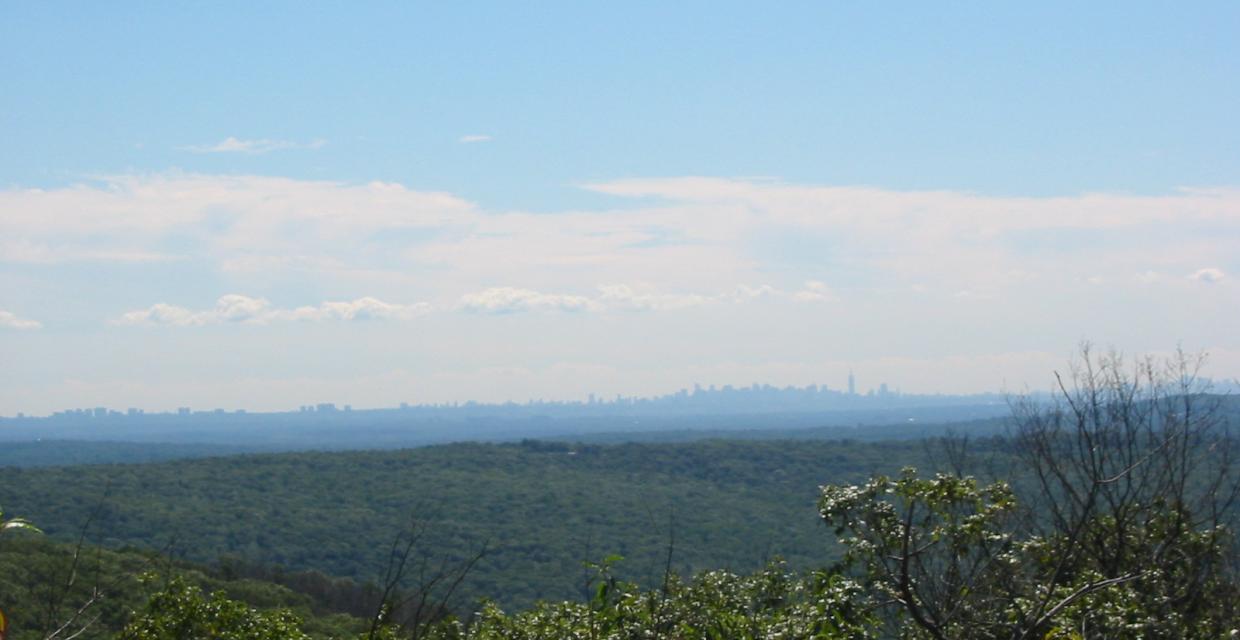 From the parking area, cross Skyline Drive. You will see a triple purple-on-white blaze on a tree, which marks the start of the Tamarack Loop. Turn right onto the gravel road that leads into Camp Tamarack, then immediately turn left and follow the purple-on-white blazes downhill on a winding footpath. At the base of the descent, turn right at a T-intersection, then bear left, skirting the...

Take I-287 to Exit 57 (Skyline Drive) and proceed north on Skyline Drive for a little over a mile to the upper parking area for Ramapo Mountain State Forest on the left side of the road (at milepost 1.4, opposite the entrance to Camp Tamarack).

rate experience
June 10, 2018
4
Old Guard Trail is overgrown again
These directions are great, but as of June 4, 2018 the Old Guard Trail is very overgrown and some of the blaze markers are hard to see. Be very careful in following the directions and make sure you are constantly seeing the blazes as you go.
wilchung
December 31, 2014
0
Old Guard Trail is now in excellent condition
<p>I did this hike yesterday (December 30, 2014) and found the Old Guard Trail to be in excellent condition. &nbsp;It seems that significant maintenance has been done on this trail since last June, and all of the blowdowns have been removed. &nbsp;The Old Guard Trail is not extensively used, but it is a very interesting loop around a relatively remote area of Camp Glen Gray.</p>
Daniel Chazin
June 07, 2014
0
Old Guard Trail Maintenance Needed
<p>Did this hike yesterday (June 6, 2014). &nbsp;Great hike, good directions and well blazed. &nbsp;But The Old Guard Trail really needs some attention. &nbsp;Very overgrown, lots of blowdowns that obscure where the trail even goes. &nbsp;If not for the (thankfully) great blazing, we'd have been wandering all over looking for the trail. &nbsp;Either it's just not used that much or it's been relegated to lower priority on trail maintenance lists. &nbsp; Only established in 2008 by the NJ/NJ TC, it's a great trail otherwise, but needs a lot of TLC or just more traffic!</p>
walkwoman
More Reviews
Log in or register to post comments