The 3,500-acre Mahlon Dickerson Reservation is the largest park in the Morris County park system. It has a number of developed recreational facilities, but also many remote sections. This hike traverses less-developed sections of the reservation. For the most part, it follows the white-blazed Pine Swamp Loop Trail, but it also includes the Purple Trail.

From the north end of the parking area, follow a paved service road marked with the teal diamond blazes of the Highlands Trail, passing through a picnic area. Soon, a sign marks the start of the white-blazed Pine Swamp Loop Trail. When the paving ends, proceed ahead on a gravel road, continuing to follow both white and teal blazes.

In 0.2 mile, you’ll reach a T-intersection with a sign and a kisok, which marks the start of the loop of the Pine Swamp Loop Trail. Turn right and head downhill on a gravel road, still 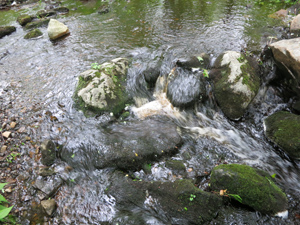 following the white and teal blazes. After crossing a brook, bear left at a fork and climb gradually.

At the top of the climb, you’ll reach a Y-intersection with a bench and a kiosk. On the right, a triple purple blaze marks the start of the Purple Trail. Turn right, leaving the road, and follow the Purple Trail into the woods on a footpath. After traversing a level area, the trail descends gradually and curves to the left, joining a woods road that comes in from the right. In a short distance, you’ll reach a limited viewpoint (partially obscured by vegetation) over the Jefferson High School and Middle School below and the hills beyond.

The Purple Trail continues to descend. At the base of the descent, the trail reaches a cascading brook and turns left to parallel it, heading upstream. The trail bears left, away from the brook, descends to the brook in an area where the brook widens into several branches, then again climbs away from the brook.

The Purple Trail ends at a wide woods road – the route of the white-blazed Pine Swamp Loop Trail. Turn right and follow the trail downhill to cross a brook (the same brook that the Purple Trail parallels) on a wooden footbridge. The trail now climbs gently and bears left at a fork, continuing through dense thickets of mountain laurel. Soon, it bears right and continues on a footpath, which approaches Sparta Mountain Road, just to the right.

At the next intersection, with Sparta Mountain Road just to the right, the Highlands Trail turns right, but you should turn left to continue on the white-blazed Pine Swamp Loop Trail. The trail climbs a little, levels off, and gradually descends.

Soon, you’ll notice hemlock and mountain laurel along the trail. You’re now entering the Pine Swamp, after which the trail is named. Just ahead, you’ll notice a short unmarked side trail on the left. Follow this trail, which leads to a rock ledge overlooking the Pine Swamp below.  Characterized by spruce, hemlock, rhododendron and mountain laurel, this swamp is remote and gives a feeling of deep wilderness. You’ll want to take a break here to observe this special feature.

The trail descends to the level of the swamp, curves to the left, and continues to follow a woods road through the swamp. After crossing another stream, the trail climbs slightly to reach a junction. The Orange Trail begins on the right, but you should continue ahead on the white-blazed trail. 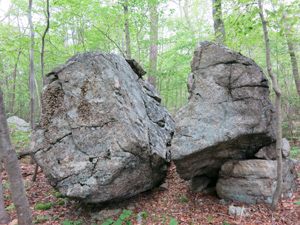 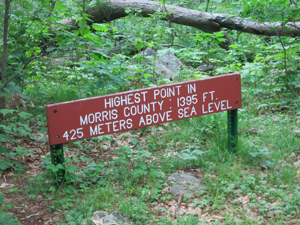 Still on a wide woods road, the trail now climbs gradually to the highest point in Morris County (1,395 feet), marked by a bench and a sign placed by the Morris County Park Commission. The actual high point is a short distance to the right of the trail.

The trail now begins a steady but gentle descent. Just ahead, it reaches a fork where a black-dot-on-blue-blazed trail begins on the right, but you should bear left to continue on the white-blazed Pine Swamp Loop Trail. In another half mile, after a slight climb, you’ll reach a junction. Turn left here, then left again in another 75 feet (where a blue-blazed trail on the right leads to the trailer area). The second turn once marked the beginning of the green-blazed Boulder Trail, named for the interesting large boulders which can be seen on both sides of the trail. The green blazes have been obliterated (you should continue to follow the white blazes), but the boulders remain.

In another half mile, three pink blazes mark the start of the Pink Trail, which proceeds ahead on the woods road, but you should turn right onto a footpath, continuing to follow the white blazes. When the footpath ends, the trail turns right onto a woods road, then in 100 feet turns left onto another road (following the sign to the “picnic area”). At the next T-intersection, you turn left again and soon reach the start of the loop of the Pine Swamp Loop Trail (marked by a sign). Turn right (again following the sign to the “picnic area”), and follow the road back to the parking area where the hike began. This loop hike traverses less-used areas of this park, paralleling a cascading stream, passing the interesting Pine Swamp and reaching the highest point in Morris County.

The 3,500-acre Mahlon Dickerson Reservation is the largest park in the Morris County park system. It has a number of developed recreational facilities, but also many remote sections. This hike traverses less-developed sections of the reservation. For the most part, it follows the white-blazed Pine Swamp Loop Trail, but it also includes the Purple Trail.

From the north end of the...

Take I-80 to Exit 34B (Route 15 North/Jefferson/Sparta). Proceed north on Route 15 for about five miles, and take the exit for Weldon Road (Milton/Oak Ridge). After about one mile on Weldon Road, you'll pass a sign indicating that you have entered Mahlon Dickerson Reservation. In another 1.5 miles, you'll pass the entrance to Saffin Pond on the right. Continue for one mile beyond Saffin Pond, passing an entrance to a camping area on the left. Just beyond, you'll pass another entrance on the right. Turn left at the next park entrance - this one, an entrance to a picnic area on the left - and continue ahead to the parking area. (The entrance to the picnic area is 4.0 miles along Weldon Road from Route 15.)