From the kiosk near the entrance to the parking lot, follow a gravel path across an open area that heads northeast, parallel to University Drive. At the edge of the woods, you will notice a double red blaze on a fallen tree, which marks the start of the Red Trail. Follow the trail into the woods. The trail soon reaches a T-intersection, where it turns left onto a woods road. At a huge boulder on the left, the Red Trail turns left onto another woods road.

In another half a mile, you’ll reach a high point on the trail where a triple-yellow blaze on a small rock marks the start of the Yellow Trail (this point is also marked by a green sign as Location 2). Turn right onto the Yellow Trail, which descends to cross a small stream on rocks. The trail turns left at a sign for Location 3 and heads north, passing just west of the low ridge known as Mt. Cecchino. In about two-thirds of a mile along the Yellow Trail, the trail crosses a small stream and begins a steady climb to the summit of High Mountain along a rocky woods road. Near the top, the trail bears left onto a footpath, bypassing an eroded section of the road.

Just below the summit, the footpath rejoins the woods road. Here, on the right, there is a panoramic east-facing viewpoint. On the horizon, beyond the suburban sprawl of northeastern New Jersey, you can see the New York City skyline, the Verrazano-Narrows Bridge and even a corner of the Atlantic Ocean. Continue up to the summit, which resembles a grassy southern bald, with a few large exposures of basaltic bedrock. From the summit, both the New York City skyline to the east and the eastern end of the ridge of the Watchung Mountains to the south are visible.

Near the base of the descent, be alert for a sharp left turn (Location 7) where the yellow blazes leave the woods road and enter the woods on a footpath. Continue along the Yellow Trail, which descends to a stream, bears left to parallel it, and then crosses it. About 250 feet beyond the stream crossing, you’ll reach a woods road (with a green sign marking Location 8).

Turn left onto the road, the route of the Red Trail, and head south. You’ll pass through an area which is often wet, but after a woods road branches off to the left, the trail route becomes drier. Further down the road, the trail passes several clusters of cedar trees, and it descends over slabs of exposed basalt. 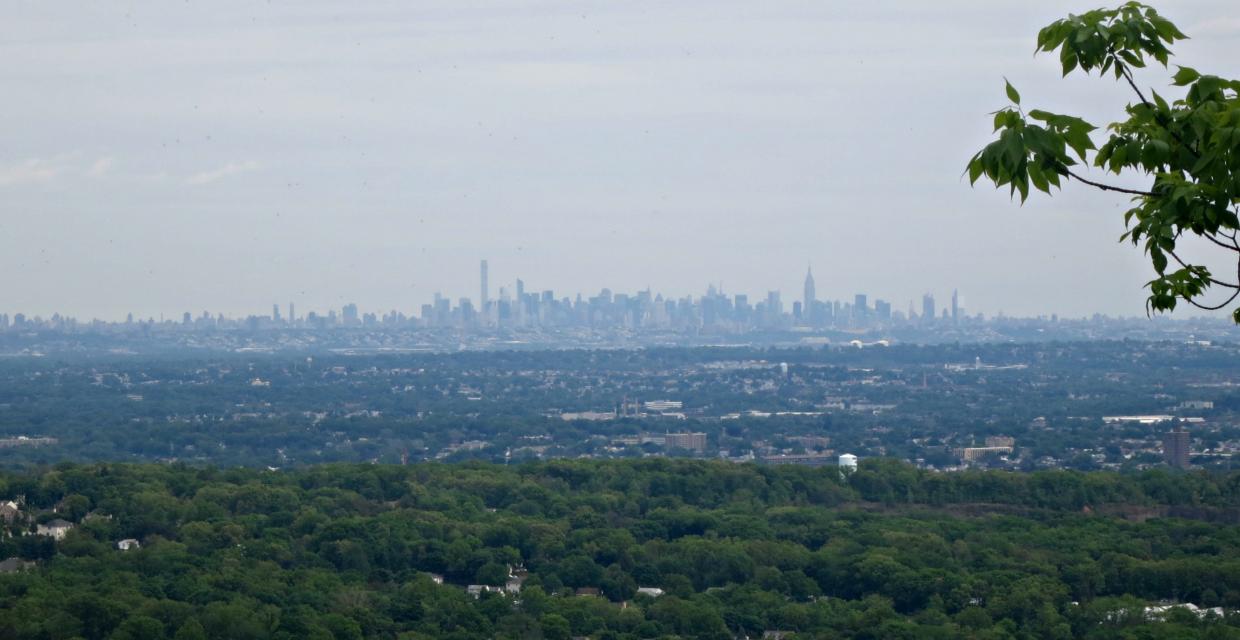 This loop hike climbs to the summit of the highest mountain in view of the ocean on the east coast (south of Maine), with outstanding views.

From the kiosk near the entrance to the parking lot, follow a gravel path across an open area that heads northeast, parallel to University Drive. At the edge of the woods, you will notice a double red blaze on a fallen tree, which marks the start of the Red Trail. Follow the trail into the woods. The trail soon reaches a T-intersection, where it turns left onto a woods road. At a huge boulder...

Take Route 208 west to the second Goffle Road exit (towards Hawthorne/Paterson) and turn right at the end of the ramp. At the next light, just beyond the intersection with Goffle Hill Road, turn right onto North Watchung Drive. At a "stop" sign at the top of the hill, turn sharply right onto Rea Avenue, which becomes North Haledon Avenue and then Linda Vista Avenue. At a T-intersection with Terrace Avenue, turn right, then bear left to continue on Linda Vista Avenue. After crossing High Mountain Road, the name of the street changes to Overlook Avenue. Continue ahead into William Paterson University (Entry 6). At the next "stop" sign, turn right and continue for 0.4 mile to a small parking area on the right, with a sign "High Mountain Park."

rate experience
January 08, 2018
0
Yellow Trail at High Mountain has been reblazed orange
<p>The section of the Yellow Trail west of the White Trail is now blazed orange, and has been designated a separate trail from the Yellow Trail.&nbsp; Formerly, two&nbsp;yellow trails left from the Reservoir Drive circle, and this caused some user confusion.&nbsp; To prevent this confusion, the western section of what was formerly the Yellow Trail is now blazed orange.&nbsp; The Park has new&nbsp;trail maps reflecting this change&nbsp;</p>
Daniel Chazin
January 07, 2018
0
Orange Yellow Trail?
While hiking around HMPP recently, I noticed that it seems the trail blazes for the portion of the yellow trail west of the white trail are more of an orange color than the yellow blazes east of the white trail. Is this intentional?
Ed Zachary
July 24, 2017
0
Overgrown?
I'm curious as to what parts of the yellow trail lp99 felt were overgrown and not marked well. In my estimation, beginning at the parking lot on University Drive, the red trail to the yellow trail to the summit of High Mountain is the most heavily traveled route in the whole preserve and is well marked.
Ed Zachary
More Reviews
Log in or register to post comments