At the southern end of the parking area, a triple black-square-on-blue blaze marks the start of the Ramapo Lake Spur. Follow the trail into the woods, passing stone ruins. After going up a steep pitch, the trail continues to climb on a wide, rocky path, paralleling a ca On the other side of the dam, a triple blue-on-white blaze marks the start of the Ramapo Lake Loop. You will be following this trail in a clockwise direction around the lake. Just ahead, the red-on-white-blazed LeGrande Hill Loop begins on the left, and for the next 500 feet, the route is co-blazed with red-on-white markers. Continue to follow the blue-on-white blazes along the wide gravel road, which runs close to the lakeshore, with views across the lake. To the north, atop a hill with several pines, you can see the ruins of Foxcroft, a mansion built in 1910 which fell into disrepair in the 1950s. (The Castle Loop, which leads to the ruins of this mansion, is another great hike in this area.) 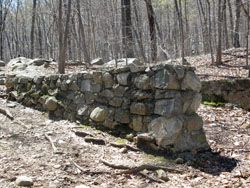 The road proceeds through dense vegetation, crosses a causeway over an arm of the lake, and passes a swamp on the left and several interesting rock outcrops. It then moves away from the lakeshore but continues to parallel it, with views over the lake through the trees.

Just past the southern end of the lake, about a mile from the dam, the road reaches a T-intersection.  Here, the red/blue LeGrande-Lake Connector begins on the left, but you should turn right to continue on the Ramapo Lake Loop. Then, in another 300 feet, bear right at a Y-intersection where the Cannonball Trail, marked by white-“C”-on-red blazes, joins from the left.

You’re now heading north through dense vegetation, paralleling the western shore of Ramapo Lake. At first, the road runs some distance from the water, but after a while, the lake can be seen through the trees. In half a mile, you’ll pass a building on the hillside to the left (formerly used as a ranger station) and, a short distance beyond, a rock ledge to the right of the trail offers a pleasant view of the lake.

After passing a small, abandoned stone building on the right, you’ll come to another intersection. Here, you should bear right, once more joining the white-blazed Castle Loop.

Follow the white and blue-on-white-blazed gravel road that runs close to the shore along the northern end of the lake, passing a viewpoint over the lake from a rock ledge on the right. Soon, you'll pass a private residence on a ledge to the left. At the end of the lake, a triple blue-on-white blaze marks the end of the Ramapo Lake Loop. Continue ahead to a T-intersection with street signs, proceed through a gap in the guardrail at a sign for the Castle Loop Trail and the Ramapo Lake Spur Trail, and continue along the black-square-on-blue-blazed Ramapo Lake Spur, retracing your steps back to the parking area where the hike began. At the southern end of the parking area, a triple black-square-on-blue blaze marks the start of the Ramapo Lake Spur. Follow the trail into the woods, passing stone ruins. After going up a steep pitch, the trail continues to climb on a wide, rocky path, paralleling a ca...

Take I-287 to Exit 57 (Skyline Drive/Ringwood) and proceed north on Skyline Drive (following the signs to "Ringwood"). Just ahead on the left is the Ramapo Mountain State Forest parking area.

rate experience
December 28, 2021
0
Six Years Later, Same Issues
Back in this area again today, and the unleashed dogs are still the main issue with hiking here. A fair amount of litter as well, although I picked up what I could. I would strongly suggest the TC consider appointing a trail steward for this area when the next steward season begins in spring.
Michael K7
January 09, 2016
0
#1 Problem
<p>Forget about the bears, rattlesnakes, or ticks- unleashed dogs are the biggest threat for those who want to hike (and especially run) on trails in the parks.</p> <p>The TC needs to adress this issue on their website, their maps, kiosks, and info that trail stewards pass along to trail users.</p> <p>Although it's not the dog's fault (it's the stupid owner's fault), any incident involving a dog that leads to an attack or bite needs to be reported to the police, and the owner held responsible.</p> <p>Stay safe folks.</p>
Michael K7
August 09, 2015
0
Ramapo Lake Loop
<p>I walked this for the first time today (8/9/2015). Very pleasant walk, especially the views of the lake on a warm summer morning!</p> <p>&nbsp;</p> <p>Only one thing marred my enjoyment - many fellow hikers had their dogs off-leash. &nbsp;I know your dog is "friendly" - to you. But it might not be so to strangers, so please keep your dog on a leash. It makes it more enjoyable for everyone.</p>
Ann Marie Walker
More Reviews
Log in or register to post comments