This hike traverses a spectacular section of the Shawangunk Ridge, following a portion of the joint Long Path/Shawangunk Ridge Trail. A newly-constructed Red Trail from a parking area on Cox Road makes it possible to follow a loop hike which requires only one car. 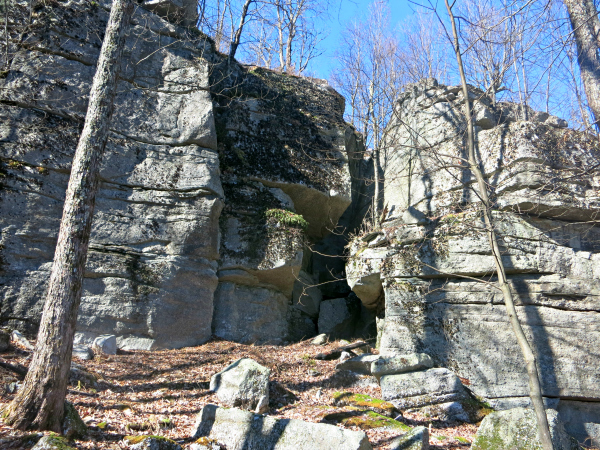 From the parking area, head uphill on the Red Trail, which follows a woods road. Almost immediately, you’ll notice a branch of the trail going off to the right. This will be your return route, but for now, continue ahead on the woods road, following the red blazes.

In 0.4 mile, bear left at a fork and cross a stream on large stepping stones. A short distance ahead, bear left at another fork and begin to follow a footpath, still marked with red blazes.

The ridge that you’re following was burned in a forest fire in May 2015. Low vegetation and small tree branches were destroyed in the fire, but the trunks of larger trees remained unscathed. The vegetation has begun to regenerate, and the scarred pitch pines are producing new branches in rather unusual patterns. 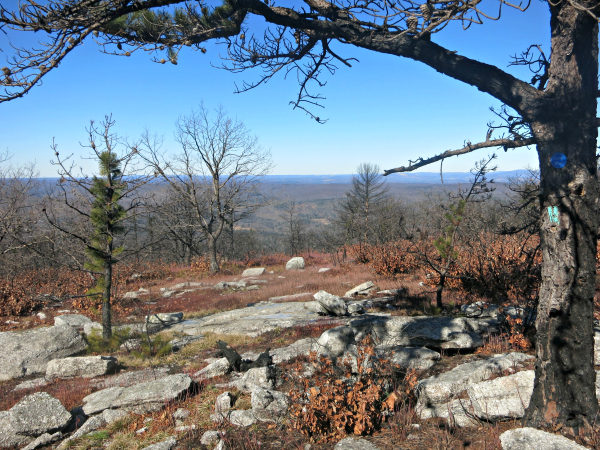 The trail soon begins a gradual climb to the high point on the ridge (1,791 feet). Just beyond, there is a panoramic north-facing view over Bear Hill. The trail now begins to descend over slabs of conglomerate rock dotted with pitch pines, with west-facing views. The best views are near the base of the descent.

After pausing to admire the spectacular views, follow the trail as it bears right and heads into the woods. In a short distance, you’ll come to a junction with the northern leg of the Red Trail. Turn right, leaving the Long Path/Shawangunk Ridge Trail, and begin once again to follow the red blazes.

You'll soon emerge into an area with dramatic cliffs and overhanging rocks on the right. You’re now directly paralleling the route you followed along the open slabs of conglomerate rock, but you’re following the cliffs that support these open rock slabs! At one point, the trail has been routed through a narrow passage, with cliffs on one side and huge boulders on other.

At the end of this spectacular section, the trail turns left and begins to descend. It soon joins a woods road, which it follows all the way back to a junction with the other branch of the Red Trail. Turn left at this junction and continue for a short distance to the parking area where the hike began. This loop hike climbs to a spectacular section of the Shawangunk Ridge, with panoramic views.

This hike traverses a spectacular section of the Shawangunk Ridge, following a portion of the joint Long Path/Shawangunk Ridge Trail. A newly-constructed Red Trail from a parking area on Cox Road makes it possible to follow a loop hike which requires only one car.

Take N.Y. Route 17 west to Exit 115. Turn left at the end of the ramp onto Roosa Gap Road and continue for 5.0 miles. When you reach an intersection where Frey Road begins to the right, bear left to continue on Pleasant Valley Road, and cross a bridge. In another 0.2 mile, turn left onto Cox Road, and follow it for 1.6 miles to a parking area on the left for the Shawangunk Ridge State Forest.

rate experience
August 21, 2017
5
Red Trail Hike
Just hiked this route August 20, 2017. The trailhead is at a new gravel lot on Cox Road. There's very new-looking glass encased information board in the lot with a map and other information. Enter the woods and you encounter two trails, one going west and one north, each with a small green "TRAIL->" sign. Both trails go up to the ridge and intersect the SRT/LP trail there. Both the west-bound and north-bound trails are blazed with round red DEC disks. We took the northbound trail, which followed a long unused fire road for a good distance and then branched off to start the ascent. Be careful to watch for the blazes or you will miss them when the trail branches off, as we did. This area is also a bit damp and there were plenty of insects-bring repellent. The ascent eventually takes you through rocky terrain with wonderful caverns and crevices as you near the top. Intial views at the top are to the west and north. Walk south along the blue disk/aqua blazed SRT/LP trail and continue to enjoy the ridge views. At one point you will get a good easterly view as well. The SRT/LP trail will eventually intersect the red trail that takes you down the ridge and back to the lot. Pay attention for the intersection as it is not marked with three blazes. The descent down has some steep sections-trekking poles would have helped a lot if I'd had them. The hike took 2.5 hours with a 15 minute rest stop on the ridge. It's moderately strenuous and there is some treacherous footing and muddy spots. The views are petty good from the ridge and you will also enjoy the section below the ridge by the caverns and crevices.
jpinsky
Log in or register to post comments