From the parking lot, head east (left when facing the woods) on the broad red-on-white-blazed Pine Meadow Trail, passing the Visitor Center on the left. In about 300 feet, you'll notice a white-blazed trail that begins on the right. Turn right onto this trail, known as the Reeves Brook Trail, which follows a woods road uphill. Soon, the trail begins to parallel Reeves Brook, which is to the left.

In half a mile, another woods road leaves to the right. A short distance beyond, follow the white-blazed trail as it bears left and begins a steeper climb on a footpath, passing attractive cascades in the brook (when the water is high). After a level section, the trail bears left and continues to climb through mountain laurel thickets. It next proceeds over undulating terrain, climbing gradually (but steeply in places), with several short descents, and continuing to parallel the brook.

About a mile and a half from the start, you'll notice a steep escarpment just ahead. Here, you'll reach a junction with the blue-on-white-blazed Seven Hills Trail. Turn right onto the Seven Hills Trail, which climbs over a rise, descends a little, and then ascends gradually.

In about half a mile, you'll come to a junction with the black-on-white-blazed Raccoon Brook Hills (RBH) Trail, which begins on the left. Continue ahead a short distance on the Seven Hills Trail to a west-facing viewpoint, known as Torne View. From here, the Ramapo Torne may be seen on the left, with the hills of Sterling Forest to the west.

Now retrace your steps to the junction with the RBH Trail. Turn right and follow this black-on-white-blazed trail, which descends to cross a stream on rocks (passing the end of the white-blazed Reeves Brook Trail on the way down). and then steeply climbs an escarpment. The trail continues along the ridge and soon reaches a southwest-facing viewpoint from a rock ledge over the Torne Valley, with the New York Thruway beyond. After a short climb, the trail emerges onto another rock ledge, with several pitch pines. This ledge -- with a large rock that juts out, known as The Pulpit -- also affords a southwest-facing view. After a short descent, the trail climbs to reach a junction with the orange-blazed Hillburn-Torne-Sebago (HTS) Trail on an open rock ledge (the junction is marked by paint blazes on the rocks).

Turn left onto the HTS Trail, which proceeds through dense mountain laurel thickets. It descends to cross a strip cleared for a gas pipeline, climbs to a minor summit, then begins a steady descent. On the way down, the blue-on-white-blazed Seven Hills Trail joins briefly from the left and soon leaves to the right, following which the descent steepens.

HTS Trail departs to the right, continue ahead on the Pine Meadow Trail. Soon, you'll come to a section where the woods road has eroded, and the trail has been relocated onto a footpath to the left.

After crossing a gas pipeline and then Quartz Brook on a wooden bridge, the Pine Meadow Trail reaches a junction where the yellow-blazed Stony Brook Trail begins to the right. Continue to follow the Pine Meadow Trail as it bears left and begins to run close to Stony Brook, with its attractive cascades. To bypass a wet spot at the crossing of a tributary stream, the trail has been relocated to the hillside on the left, where it crosses another wooden bridge. Just beyond, you'll come to the Reeves Meadow Visitor Center and the parking lot where the hike began. 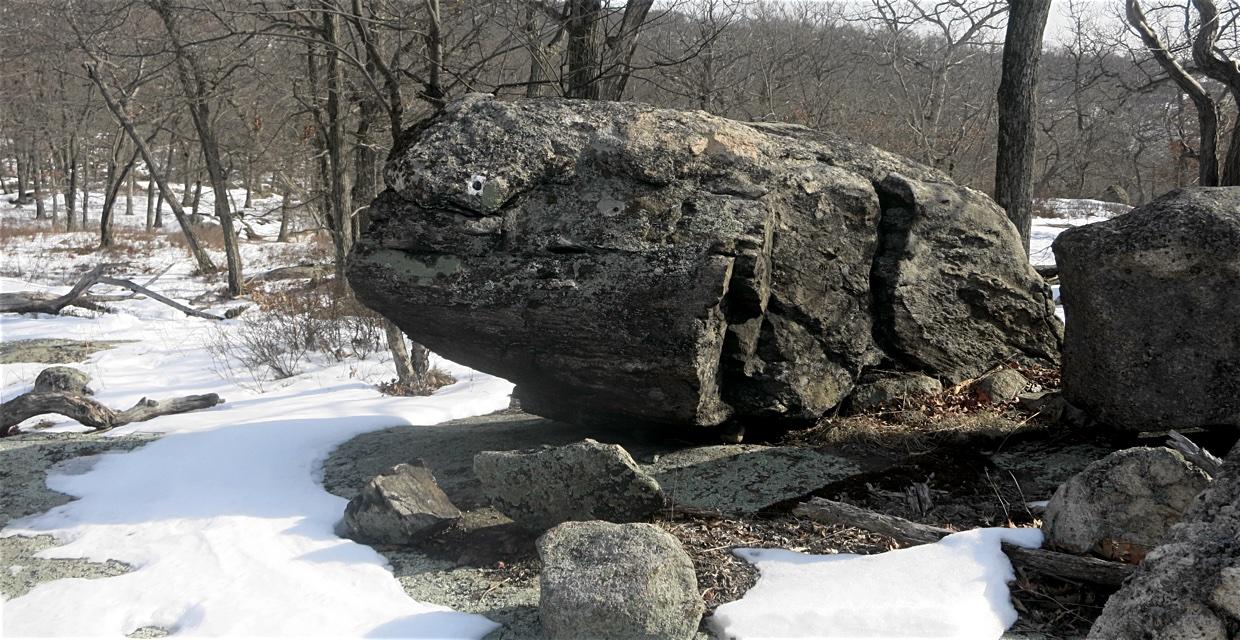 This loop hike at the southern end of the park follows picturesque streams and climbs to several panoramic viewpoints.

From the parking lot, head east (left when facing the woods) on the broad red-on-white-blazed Pine Meadow Trail, passing the Visitor Center on the left. In about 300 feet, you'll notice a white-blazed trail that begins on the right. Turn right onto this trail, known as the Reeves Brook Trail, which follows a woods road uphill. Soon, the trail begins to parallel Reeves Brook, which is to the...

Take N.J. Route 17 north to the New York State Thruway and take the first exit, Exit 15A (Sloatsburg). Turn left at the bottom of the ramp onto N.Y. Route 17 north, and continue through the Village of Sloatsburg. Just past the village, turn right at the traffic light, following the signs for Seven Lakes Drive/Harriman State Park. Cross an overpass over railroad tracks and continue along Seven Lakes Drive for three-quarters of a mile to the Reeves Meadow Visitor Center, on the right. Park in the Visitor Center's parking lot.

Take the NJ Transit/Metro-North Port Jervis Line to the Sloatsburg station.  From the station, cross the railroad tracks and head north on Ballard Avenue. When Ballard Avenue ends, turn right onto Academy Avenue and continue to Seven Lakes Drive. Turn right on Seven Lakes Drive, continue under the New York State Thruway, and pass Greenway Road and Laurel Road on the right. A short distance beyond, about 0.9 mile from the train station, you'll reach a bridge over the Stony Brook. On the bridge, you will notice a triple red-square-on-white blaze and a directional arrow, which mark the trailhead of the Pine Meadow Trail. Turn right, leaving the road, and follow this red-on-white-blazed trail for about 0.8 mile to the Reeves Meadow Visitor Center, where the hike begins.