From the parking area, follow a handicapped-accessible path to a playground, where a kiosk marks the start of the Hutcheon Trail. Follow this blue-blazed trail past a “Green Acres” sign into the woods.

In a short distance, you’ll notice a triple yellow blaze on a tree to the right. Turn right and follow the yellow-blazed Sneden-Haring-Lamont Trail, which heads south, then turns right at a T-intersection and crosses a brook on a culvert. To the right is the site of the Sneden Ice Pond (now overgrown with vegetation). The trail now turns left and continues to head south.

As the yellow-blazed Sneden-Haring-Lamont Trail approaches a wider brook, the blue-blazed Hutcheon Trail joins from the left. Then, just before reaching the brook, a triple red blaze on the right marks the start of the Roaring Ravine Trail. Turn left and follow this red-blazed trail uphill. The scenic trail parallels the cascading Roaring Brook, first on the level of the brook, then high above it. As it approaches the top of the western slope of the Palisades, the trail moves away from the brook.

Near the top, the red-blazed trail ends at an intersection with a wide woods road – the route of the yellow-blazed Sneden-Haring-Lamont Trail. Turn right and follow this trail, which crosses Roaring Brook on rocks. Just beyond, follow the yellow-blazed trail as it bears right, leaving the road. The white-blazed Lamont Rock Trail joins briefly, but when the trails diverge just ahead, bear right to continue on the yellow-blazed trail. The trail begins to descend, first gradually and then more steeply.

As the yellow-blazed trail nears the base of the slope, it reaches an intersection with the blue-blazed Hutcheon Trail and the white-blazed Lamont Rock Trail. Turn sharply right here and follow the blue and white blazes. A short distance ahead, when the trails diverge, bear left and follow the blue blazes downhill. 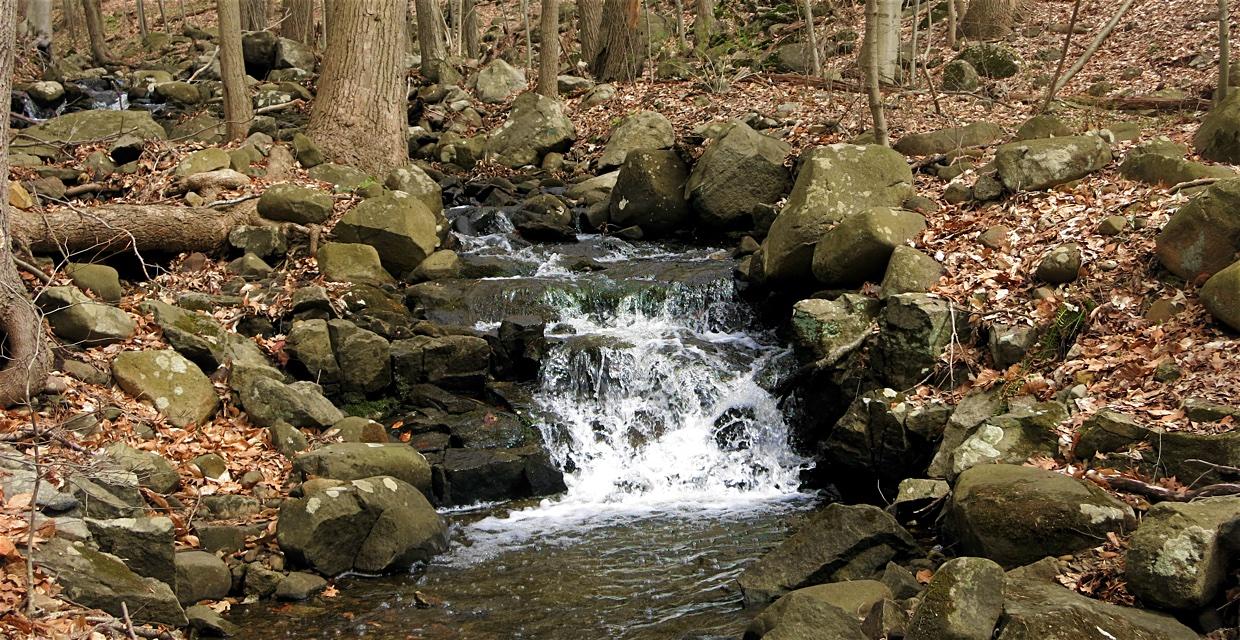 This hike loops around this sanctuary, on the western slope of the Palisades, climbing a scenic ravine along a cascading stream.

Take the Palisades Interstate Parkway to Exit 4. Turn left at the bottom of the ramp onto Route 9W (if coming from the north, turn right onto Route 9W) and proceed for 1.1 miles, entering New York. At the next traffic light, turn left onto Oak Tree Road and, in 0.2 mile, turn left onto Closter Road. In 0.5 mile, after crossing under the Parkway, you reenter New Jersey, and the road becomes Rockleigh Road. Continue for another 0.2 mile to the Rockleigh Municipal Building (26 Rockleigh Road) and turn left into the driveway. Park in the rear of the building.

rate experience
October 23, 2010
0
Shorter Thank You'd Think
Did this hike yesterday and it took me 40 minutes. So, it's shorter than it may seem (and I'm nowhere close to being an experienced or fast hiker). However, you'd never know that you're right in the middle of suburban New Jersey, so it's a great hike if you don't want to drive too far. Also, the directions are very easy to follow. Thanks, Daniel!
luuudog
Log in or register to post comments