In about 500 feet – just before reaching the level of the viaduct – you'll arrive at a fork in the trail. Here, the red-diamond-blazed Otterkill Trail begins on the left. Bear left and follow the Otterkill Trail. A short distance ahead, you'll reach a sweeping east-facing view, with the railroad tracks visible in a rock cut below. The trail continues parallel to the railroad over undulating terrain.

In about a mile, the Otterkill Trail turns left onto an intersecting woods road and descends to cross the cascading Baby Brook on a wooden footbridge. On the south side of the brook, you'll reach a junction with the yellow-blazed Jessup Trail. Turn left and follow the joint Otterkill/Jessup Trail. In a short distance, the two trails diverge, and you should continue ahead on the red-diamond-blazed Otterkill Trail.

In another mile, the white-blazed Sweet Clover Trail crosses. Continue ahead on the Otterkill Trail, which curves right and descends to cross Dark Hollow Brook below an attractive waterfall. Just past the brook crossing, the Otterkill Trail ends, and you should turn right onto the Dark Hollow Trail, marked by black-on-white blazes. .

The next mile and a half, during which you will climb over 1,000 vertical feet, is the most strenuous part of the hike. The Dark Hollow Trail begins by following a woods road up the mountain, first quite steeply, then more moderately on switchbacks. The trail then turns sharply right and ascends steeply to an east-facing viewpoint – the first of many that you’ll encounter on the hike. Just beyond, the trail rejoins the woods road and continues to climb steadily through a mountain laurel thicket. It then turns left, leaving the road, descends to cross a small stream, and climbs steeply to an expansive viewpoint. The Newburgh-Beacon Bridge is visible to the northeast, and the fire tower atop South Beacon Mountain can be seen across the Hudson River.

After descending slightly to cross another stream and an unmarked trail, the Dark Hollow Trail continues to climb, passing a narrow cave to the left. About two and one-half miles from the start of the hike, the Dark Hollow Trail ends at a junction with the yellow-blazed Jessup Trail and the teal-diamond-blazed Highlands Trail. Turn left and proceed south on the joint Jessup/Highlands Trail. 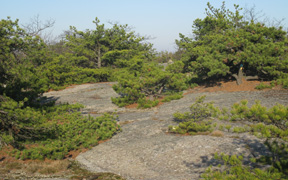 You’ve now reached the ridge of Schunemunk Mountain, which is composed of a conglomerate rock, studded with pebbles of white quartz and pink sandstone. This unusual rock has been smoothed by glacial action, sometimes resembling a level sidewalk. After 0.3 mile of this ridge-walking, you will come to a large open area studded with pitch pines. You’ll notice a line of cairns (rock piles) which lead to the right; follow them into a wooded area, and you will soon arrive at the Megaliths – a group of huge blocks that have split off from the bedrock. This is a good place for a break, as the interesting geologic features are complemented by a fine viewpoint to the west.

When you feel rested, return to the main trail and turn right. Soon, you will arrive at the summit of the 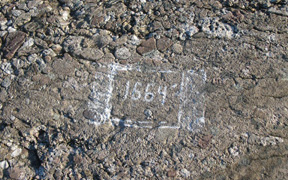 mountain. The elevation (1,664 feet) is painted on the bedrock, and there are good views from this spot. You can see the Perkins Tower atop Bear Mountain to the southeast, with the Shawangunk Ridge visible to the northwest, and the Catskills beyond. In another 500 feet, you’ll pass the terminus of the Ridge-to-Ridge Trail (blue on white) to the right.

Continue ahead along the ridge, following the yellow and teal blazes for another mile, with open expanses of rock alternating with mountain laurel thickets. When the trail begins to descend, look for a junction with the orange-blazed Western Ridge Trail. This intersection is just below a descent from a rock ledge. Turn right onto the Western Ridge Trail and follow it as it steeply descends the ridge into the Barton Swamp, where it crosses a woods road and a brook, briefly joins a woods road, then turns right and gently ascends the western ridge of the mountain.

After crossing Baby Brook, the Barton Swamp Trail reaches a junction with the yellow-blazed Jessup Trail. Turn left, and follow the Jessup Trail downhill, parallel to the brook, on an eroded woods road. Pay careful attention to the yellow blazes, which detour in places to the left to pass an interesting waterfall and to avoid a particularly bad section of the road. At the base of the descent, turn left onto the red-diamond-blazed Otterkill Trail, which crosses the brook on a wooden footbridge. You’re now retracing the route you followed at the start of the hike. When the Otterkill Trail ends at a junction with the white-blazed Trestle Trail, turn right onto the Trestle Trail, follow it down to Otterkill Road, then turn left onto Otterkill Road and continue to the parking area where the hike began. This loop hike climbs about 1,500 feet to reach a ridge composed of unusual conglomerate rock, with many viewpoints from open rock ledges dotted with pitch pines.

rate experience
August 07, 2017
4
rigorous hike, beautiful and difficult
this was a rigorous hike, beautiful and difficult. we did this hike in May 2016. climbing up was a challenge, but coming down there was a lot of scrambling. when we went, most of the people we saw were doing the loop the opposite way than we did it. probably b/c scrambling up is easier than scrambling down. and the descent along the dirt would have been easier than our descent. i rolled my ankle at one point during the scramble in the descent and was hurting. i suppose next time i should be more careful. we came to a point where we saw a black bear scurry across the rock. we stopped in our tracks until the bear was out of sight. later we saw the others wearing bear bells and told them, well, we did just see a bear. they said they hiked the area a lot and have never seen one but they know that others have. we also ran into the person who keeps the trail and he asked us what we thought of it and we told him we liked the condition of the trail a lot. he was happy with that and went on his way. i would suggest doing the loop up the scrambles and would probably do that if we come again to this hike.
SnowEcho
May 25, 2017
0
Nice Hike
Did this hike on 6/9/16. This is a very nice hike with varied terrain. The rock and limb markers on the outcrops and megaliths are a HUGE help locating the paths as they re-enter the trees. Great workout, amazing views. Completed in about 5 hrs. Only ran into 1 person and her dog .  Also saw 2 big snakes getting it on right on the trail. I was told they are Rat Snakes and not normally dangerous. None the less, I gave them a wide birth.
rdgee65
May 03, 2015
0
Great hike!
Loved this hike. The ridgeline is spectacular.   Difficult hike for dogs - even our very athletic dog had to be helped down a couple of the steep rock scrambles. Having a harness for your dog helps a ton. Also, lots of sun exposure, so bring plenty of water.   Some photos: http://agiletrekker.blogspot.com/2015/05/schunemunk-mountain-loop-from-taylor.html
TrekkerHikes
More Reviews
Log in or register to post comments