Sourland Mountain is a ridge which straddles the borders of Somerset, Hunterdon and Mercer Counties. Due to the harshness of the land and its unsuitability for farming, large portions of the ridge have remained undeveloped. The largest protected portion of the ridge is in Somerset County, where about 6,350 acres have been set aside as a preserve, administered by the Somerset County Park Commission.

Near a small kiosk at the edge of the woods, you'll notice a wooden post with a triple orange blaze, which marks the start of the orange-blazed Maple Flats Trail. Head into the woods on this trail, paralleling a brook on the left. Note the many beech trees, with exposed route systems, along the trail.

In about five minutes, you’ll reach post #1 (many intersections in this park are marked with white-on-green reflective numbers on wooden posts). Here the Maple Flats Trail turns left, crossing the stream on a footbridge, but you should continue ahead, now following the yellow-blazed Devil's Half-Acre Trail.

The yellow-blazed trail proceeds steadily uphill (you’ll climb a total of about 400 vertical feet during the first part of the hike), skirting a small boulder field. It goes through a heavily wooded area, far removed from the homes and farms that you passed on your way to the park. In about ten minutes, the trail levels off, and the black-dot-on-yellow-blazed Devil's Half-Acre Connector Trail begins on the left. Continue ahead on the yellow-blazed trail, which soon resumes its climb. After leveling off again, the yellow-blazed trail climbs a little more and reaches an area of huge boulders. The first gigantic boulder is just to the left of the trail, but you’ll encounter many other large boulders in the next half hour or so. This is the most interesting part of the hike, so take your time to enjoy the unusual boulders. You’ll pass several overhanging boulders, as well as rocks perched atop large boulders. At one point, the trail goes through a passage between two huge boulders.

Soon, you'll reach Post #2, where the pink-blazed Bouldering Trail begins. You can either take this trail, which rejoins the yellow-blazed trail in 0.2 mile, or continue ahead on the yellow-blazed trail, which follows a slightly longer route. Just beyond the end of the pink-blazed trail, you'll pass a large boulder topped with many small cairns. Here, the other end of the black-dot-on-yellow-blazed Devil's Half-Acre Connector Trail is on the left. Towards the end of the boulder field, be alert for another unique feature of this trail – a large tree that has grown out of a horizontal crack in a boulder!

The trail continues through a forest that features many tulip trees – tall, straight trees, with no branches below the treetops. You’ll notice a number of multiple tulip tree trunks growing out of the same roots.

Finally, after about an hour of hiking, you’ll reach post #3. To the left, the yellow-blazed trail leads back towards the parking area, but you should bear right and follow the white-blazed Tributary Trail, which begins here. In 200 feet, you’ll come to another junction. Here, the white-blazed trail bears left, but you should turn right onto the red-blazed Ridge Trail, which crosses a stream on rocks and proceeds through another boulder field, climbing gently.

In about 15 minutes, you’ll pass through a gap in a chain-link fence. Just beyond, the trail crosses a gas pipeline. A short distance beyond the pipeline, the black-dot-on-red Ridge Connector Trail begins on the left. You should turn right to continue on the red-blazed Ridge Trail, which follows a winding, level path through another boulder field, passing a number of interesting large boulders. After bending sharply to the right, the trail begins a gradual descent.

You'll soon reach post #5, marked by a huge cairn. Here, the blue-blazed Roaring Rocks Trail turns left, but proceed ahead on the white-blazed Tributary Trail, which descends on switchbacks and continues parallel to Roaring Brook.

Just beyond an open gate in a chain-link fence, you’ll reach another junction. Here, the black-dot-on-white-blazed Tributary Connector begins on the left, but you should proceed ahead on the white-blazed Tributary Trail. Just ahead, the trail approaches Roaring Brook (note the cascades in the brook when the water level is high), then bears left and heads away from the brook. In another 15 minutes, you’ll cross a boardwalk over a stream and pass an old stone-and-concrete wall (possibly built as a dam) to the left of the trail. Just beyond, you’ll come to an intersection marked by post #7. The other end of the black-dot-on-white-blazed Tributary Connector is on the left, but you should continue straight ahead on the white-blazed Tributary Trail.

The next stretch of trail is nearly level, and it features many short stretches of boardwalk. In another 20 minutes or so, you’ll reach post #8. Here, the white-blazed trail ends, and you should turn right onto the orange-blazed Maple Flats Trail.

Soon after traversing another long stretch of boardwalk, you’ll again cross the gas pipeline. Continue straight ahead to the next junction, where the black-dot-on-orange-blazed Maple Flats Connector leaves to the left. Here, you should turn right, continuing to follow the orange-blazed Maple Flats Trail. Just ahead, you’ll emerge onto a grassy area and descend towards a small pond. Bear left around the pond, and you’ll reach the parking area where the hike began. 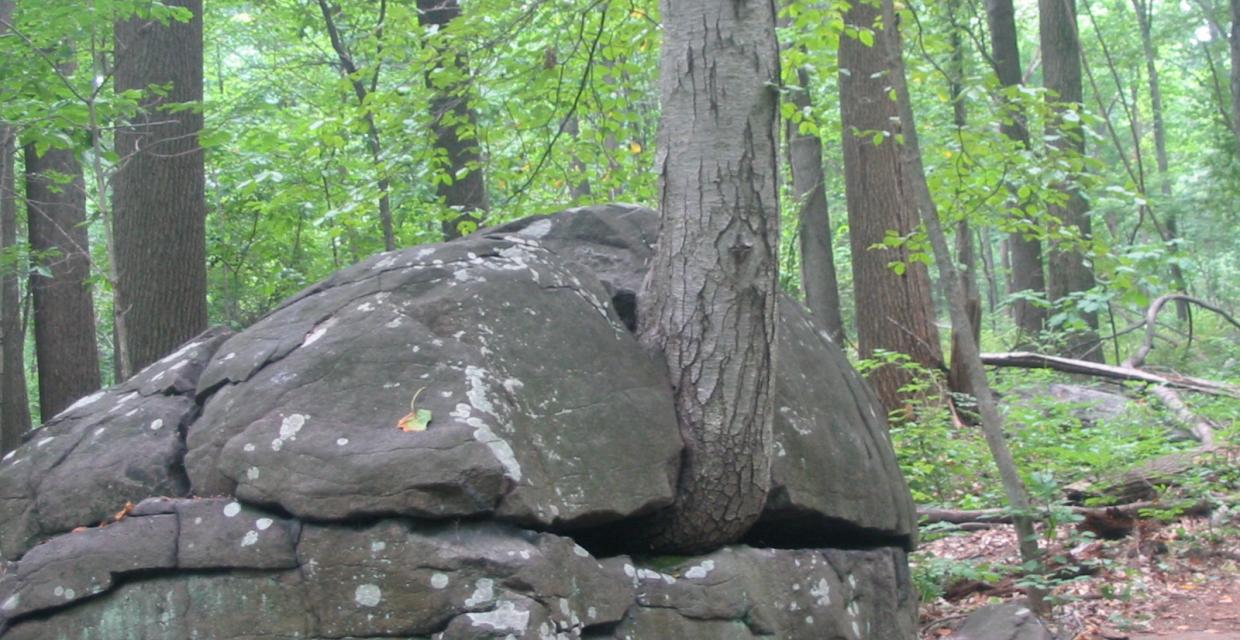 Sourland Mountain is a...

rate experience
February 03, 2011
0
Sourland Preserve Loop Hike
I did the loop on Memorial Day (hot humid) - an interesting trail but not among my top-ten in the state. The Devil's Half Acre is cool and worth the trek. Pictures from my hike at Sourland Preserve - http://www.flickr.com/photos/sph001/sets/72157624059797373/show/ For me, I did not find Rolling Rocks all that exciting -but perhaps after a major rain storm or winter thaw.... and as noted before - From #6 you can take the Red Square to the Rocks -then continue up to #8.
sph001
June 17, 2009
0
Sourland-
It is now permissible to cross through the fencing to see the huge boulders around Roaring Brook. This arrangement was made with 3M Company some time ago. My source for this is Sgt. Phil Richards of the Somerset County Park Rangers. I call Phil from the trail all the time about downed trees, whatever. This park is close to home for me, so I hike it frequently. I highly recommend hiking the big trail, the Ridge Trail, with the square blazes, backwards, clockwise, 13 to 1. That way, the long walk in from 13-9 is a good warm up. If you hike 1-13, from 9-13 is just a long, often wet, slog out. With the boulders, boulder field at the brook. and incredibly thick foliage, Sourland comes close to rivaling some Highlands area hikes. Don't miss it.
mitrich
Log in or register to post comments