Leave the park visitor center, using the front entrance, and turn right on a dirt path, following the blue blazes of the Sterling Lake Loop. The trail briefly joins the paved entrance road, then bears right and goes across a grassy field, passing the stone foundations of a former church on the right. It enters the woods on a footpath and soon reaches a junction with the yellow-blazed Lakeville Ironworks Trail. Here, the ruins of the Sterling Furnace (built in 1770 and abandoned in 1804) are visible below on the left.

Continue ahead on the blue-blazed trail and cross the outlet of Sterling Lake on a wooden bridge. A short distance beyond, the trail turns left and descends to a paved road. It turns right and follows the road. Soon, you’ll notice concrete-and-brick ruins on the left. These are remnants of former mining and ore processing operations. Iron ore was discovered in the area as early as 1736, and mining operations continued until 1917. The structure that you can see from the road was built for the Sterling and Lake Mines, both of which extended under the lake. Just past these ruins, the road briefly runs alongside Sterling Lake, affording views across the lake.

A short distance beyond, the road curves to the right. In another 200 feet, a sign marks the start of the Bare Rock and Fire Tower Connector Trails. Turn left, leaving the blue-blazed trail, then immediately turn right and continue along the orange-blazed Bare Rock Trail, which begins to climb on an old woods road. The trail generally follows this road up the Sterling Ridge, but it has been routed off the road in a number of places to avoid some wet and badly eroded sections. Follow the orange blazes for about three-quarters of a mile, climbing steadily, until you reach the crest of the ridge at a junction with the blue-on-white-blazed Sterling Ridge Trail (marked by a sign).

Turn left here and head south along the ridge on a footpath, now following the blue-on-white blazes of the Sterling Ridge Trail and the teal diamond blazes of the Highlands Trail. The trail climbs to a broad viewpoint over Sterling Lake from open rocks, then continues along the ridge over undulating terrain. About a mile from the junction with the Bare Rock Trail, you’ll reach a ranger cabin and the Sterling Forest Fire Tower.

Built in 1922, the fire tower affords an impressive 360̊ view of Sterling Forest and the surrounding area. Sterling Lake is in the foreground to the northeast, Cedar Pond may be seen to the south, and a portion of Greenwood Lake is visible to the west. On a clear day, North and South Beacon mountains of the East Hudson Highlands may be seen in the distance to the northeast, and Schunemunk Mountain is visible to the north, with the Catskills on the horizon.

After climbing the tower, you may want to take a break. There is a picnic table at the base of the tower where you can eat your lunch. When you’re ready to continue, proceed east on the red-blazed Fire Tower Trail, which descends from the ridge on a pleasant woods road (do not follow the joint Fire Tower/Sterling Ridge Trail, which heads south on a footpath). This grassy road descends steadily, with a few rough benches placed alongside for hikers to rest.

In about a mile, when the road levels off, you’ll come to a junction. The rectangular red plastic blazes that you have been following turn off to the right on a branch road, but you should continue ahead on the main road, now marked with red triangle blazes as the Fire Tower Connector Trail. The road continues to descend, and after passing a private residence and going around a locked gate, it ends at a junction with the blue-blazed Sterling Lake Loop, near the shore of Sterling Lake. Turn right and follow the blue blazes back to the visitor center (note the left turn off the paved road in about a third of a mile). 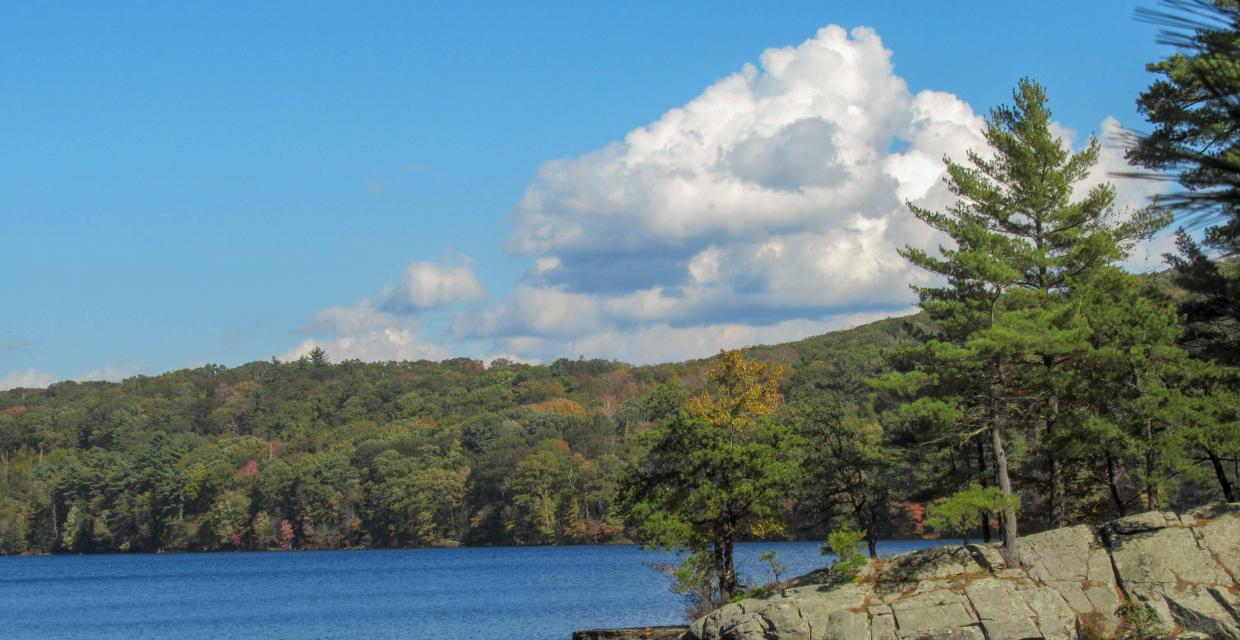 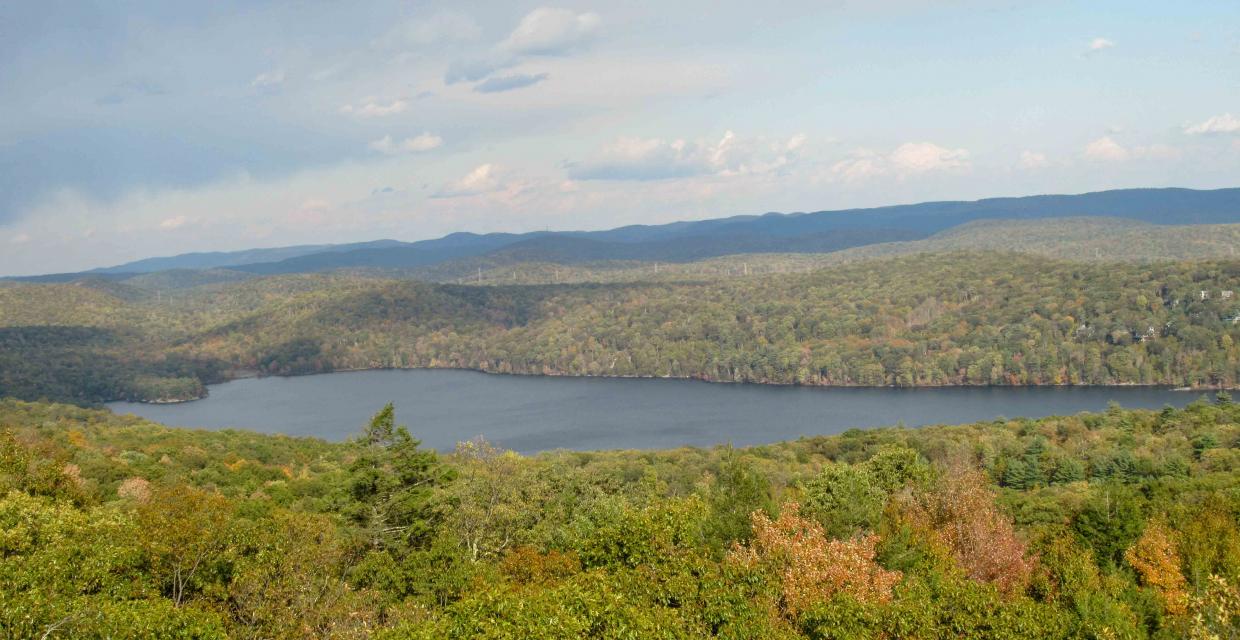 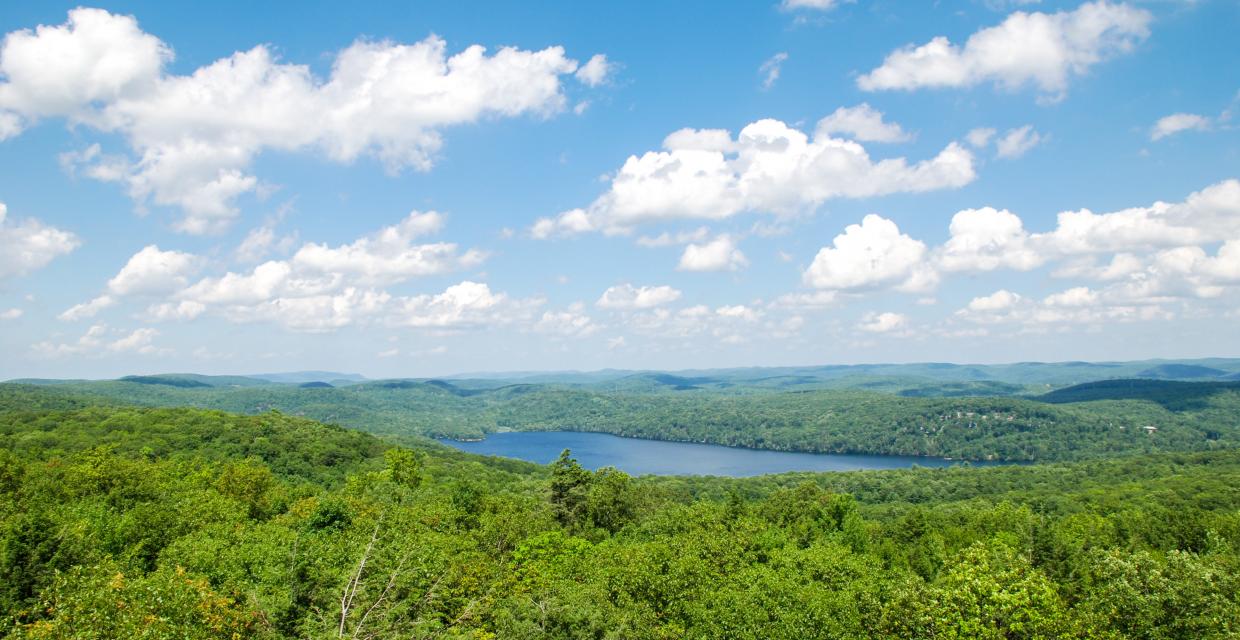 Leave the park visitor center, using the front entrance, and turn right on a dirt path, following the blue blazes of the Sterling Lake Loop. The trail briefly joins the paved entrance road, then bears right and goes across a grassy field, passing the stone foundations of a former church on the right. It enters the woods on a footpath and soon reaches a junction with the yellow-blazed Lakeville...

Take the New York Thruway to Exit 15A. Turn left at the bottom of the ramp onto Route 17 and head north for 1.4 miles to the exit for Sterling Forest. Follow Sterling Mine Road (County Route 72) west for 3.0 miles, then turn right onto Long Meadow Road (County Route 84). Proceed north on Long Meadow Road for 3.5 miles, then turn left onto Old Forge Road and continue for 0.5 mile until you reach the Sterling Forest State Park Visitor Center. Park in the parking lot on the right side of the road, then cross the road to the visitor center, where a free trail map is available.

rate experience
October 21, 2018
5
Loved it!
10/20/18- Not only were the instructions above completely accurate, the trail markers and signage on the trails made this easy to follow and completely enjoyable. Cell service on this trek was nearly non-existent for multiple members of our party so copy and paste or screen shot the route if you need it. We did take some extra time to explore the mine buildings. Can’t wait to check out some more of the trails.
LizM
July 13, 2017
5
Fire tower partially closed for construction
I did this hike on 7/4/17. The directions were on point and the trail was easy to follow. I took that side trail that another hiker pointed out below. It was worth it to get a sense of history about the surrounding area, and it added maybe 20 minutes at most. One thing to note is that the fire tower is closed off about halfway up the tower. The boards are rotting and are being replaced by staff in the area. I am sure the renovation won't take long, but it is something I wanted to note.
bromli
December 13, 2016
4
Great hike
<p>I did this hike on April 30, 2016. Your directions were spot on. The visitor center is quite informative and the staff very helpful. The trails were well blazed and signs at every junction. I would recommend bug repellent in the warmer weather. The views from the fire tower were outstanding. I look forward to exploring other areas of this park. For photos of this hike visit:https://scenesfromthetrail.com/2016/04/30/sterling-forest-state-park/
CeeGee
More Reviews
Log in or register to post comments