Leave the park visitor center, using the front entrance, and turn right (west) on a dirt path, following the blue blazes of the Sterling Lake Loop. The trail briefly joins the paved entrance road, then bears right and goes across a grassy field, passing the stone foundations of a former church on the right. It enters the woods on a footpath and soon reaches a junction with the yellow-blazed Lakeville Ironworks Trail, whic 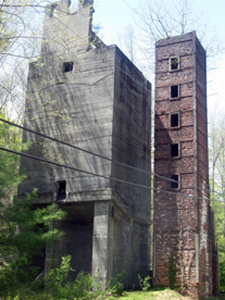 h begins on the left. Here, the ruins of the Sterling Furnace are visible below.

Continue ahead, following the blue blazes of the Sterling Lake Loop, which crosses the outlet of Sterling Lake on a wooden bridge. Just beyond, the trail turns left and descends to a paved road. It turns right and follows the road, soon passing ruins of concrete and brick structures on the left. These are remnants of the former mining operations in the area. Sterling Forest was once a center of mining activity, with the first mines opened in the 1700s. The last active mine in the area closed down nearly 100 years ago.

Just beyond these ruins, you’ll pass the western end of the Lakeville Ironworks Trail. Continue ahead along the road, which soon begins to run alongside Sterling Lake, with views across the lake. About three-quarters of a mile from the start, a sign marks the start of the Bare Rock and Fire Tower Connector Trails, and the paving ends just beyond. Continue ahead on a woods road, blocked by a gate. The road runs inland for some distance, then again parallels the lakeshore.

Near the northern end of the lake, the yellow-blazed Sterling Valley Trail joins from the left, and you now follow both yellow and blue blazes. Soon, you’ll pass a former boat-launching ramp on the right. Just beyond, the trail crosses an earthen causeway, with broad views over the lake. A quiet, picturesque pond is on the left.

The trail now goes slightly inland and climbs over two rises. After descending through a mountain laurel thicket, it again 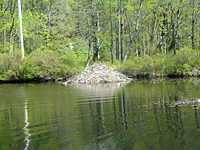 emerges on the lakeshore at a small sandy beach, with a dead pine tree overhanging the water. It crosses another earthen causeway over an arm of the lake, with a beaver lodge on its east side. At the end of the lake, the trail bears left and heads north, running parallel to the narrow arm of the lake.

When you reach the end of this arm, follow the blue-blazed Sterling Lake Loop as it turns sharply right onto another woods road (the yellow-blazed Sterling Valley Trail continues straight ahead). The blue trail proceeds south along the road, which climbs gradually, then descends a little. It crosses the outlet of Cricket Pond, visible on the left, and continues to run above the lake, climbing gently. You can catch some glimpses of the lake through the trees on the right.

After a mile of pleasant walking, the woods road turns away from the lake and reaches a fork. Bear left to continue along the blue-blazed trail, which narrows to a footpath. The trail crosses a wet area and soon widens to a rocky woods road, which climbs rather steeply. 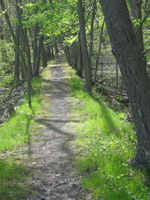 Just beyond the crest of the rise (marked by a large cairn), the blue-blazed trail turns right and descends on a footpath. (The orange-triangle-blazed Pine Meadow Connector begins here on the left.) Soon, the trail turns right on a gravel road and follows it for 75 feet, then turns left, leaving the road, and continues to descend on a footpath to paved Old Forge Road, which it crosses. Just before reaching a second paved road (County Route 84), the trail turns right and crosses a wetland on an earth-and-rock embankment of a former mining railroad. It bears left at the end of the embankment, then soon turns right and joins a gravel road which parallels County Route 84 (below on the left).

Soon, the orange-triangle-blazed McKeags Meadow Connector begins on the left. Proceed ahead on the Sterling Lake Loop, which emerges onto a grassy area. Continue ahead to paved Old Forge Road, then turn left and follow the road a short distance. Bear right at a sign for “overflow parking,” cross the parking area, then reenter the woods and follow the blue-blazed trail on a footpath back to the visitor center, completing the loop. 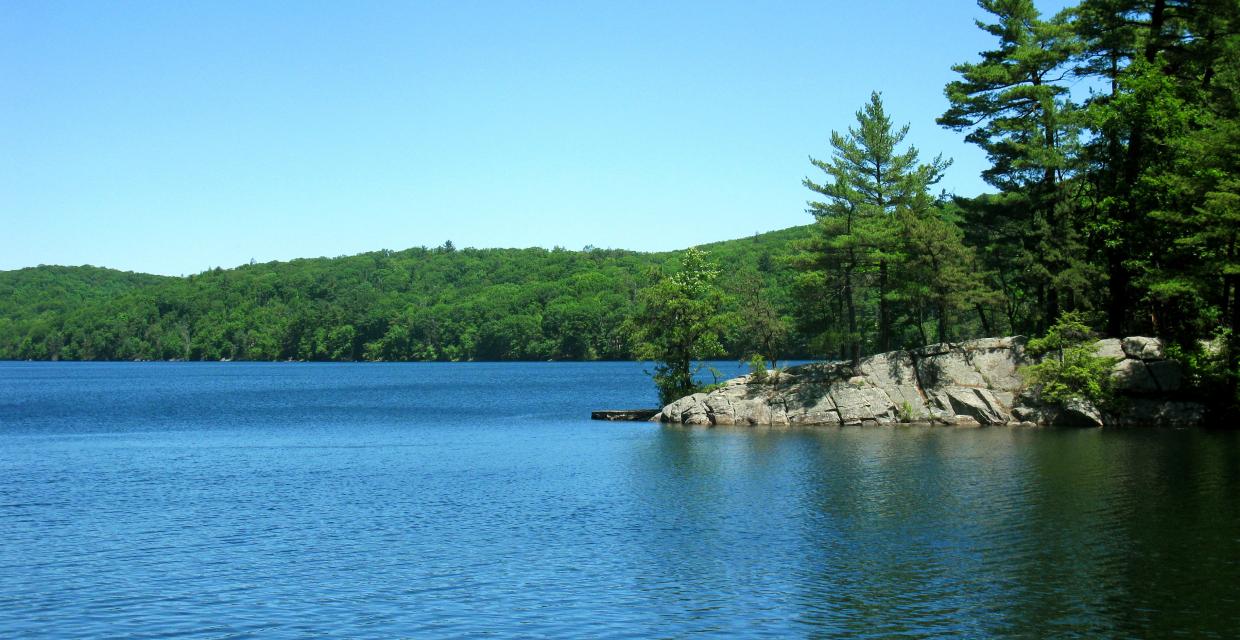 Leave the park visitor center, using the front entrance, and turn right (west) on a dirt path, following the blue blazes of the Sterling Lake Loop. The trail briefly joins the paved entrance road, then bears right and goes across a grassy field, passing...

Take the New York Thruway to Exit 15A. Turn left at the bottom of the ramp onto Route 17 and head north for 1.4 miles to the exit for Sterling Forest. Follow Sterling Mine Road (County Route 72) west for 3.0 miles, then turn right onto Long Meadow Road (County Route 84). Proceed north on Long Meadow Road for 3.5 miles, then turn left onto Old Forge Road and continue for 0.5 mile until you reach the Sterling Forest State Park Visitor Center, Park in the parking area on the right side of the road and walk down to the visitor center to view the exhibits and obtain a free trail map.

rate experience
November 06, 2018
4
Nice and easy for an afternoon!
This is a very heavily traversed and easy to handle hike. I would recommend it for those with kids or who have only a short time on their hands. It takes me about an hour and a half to complete and is very clear the whole way. Great Sunday stroll!
RachyLovesRattys
March 23, 2014
0
Make sure your boots are waterproof
<p><img src="/sites/default/files/u18171/20140321_164202.jpg" alt="Flooded causeway." width="450" height="600"></p>
Sully
March 22, 2014
0
The first causeway needs to be elevated!
<p>Did this hike counterclockwise and it's a really nice hike but perhaps the sate should build an elevated bridge over the first causeway since it was overflowing with water that was a foot deep.</p> <p>Personally, I just pulled up my pants and ran through it, but it was dagerous and would not recommend doing it until the water levels reced.</p> <p>Still I had a good time and would do this again in the late spring or Summer time.</p> <p>Excellent blazes and not possible to get lost with such</p> <p>Also, if possible you should allow images o be uploaded straight from the computer instead of needing to adding url.</p> <p>Hope you can make this happen.</p>
Sully
More Reviews
Log in or register to post comments