From the parking area, proceed uphill on a wide gravel road, following the yellow blazes of the Stillman Trail. In 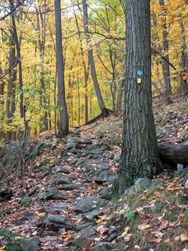 about half a mile, after crossing a stone-arch bridge, the trail turns left, leaving the gravel road. Just before reaching a north-facing viewpoint over the Hudson River, the teal-diamond-blazed Highlands Trail joins from the left.

The joint Stillman/Highlands Trail now begins to climb on a footpath. With the gravel road just to the right, the trail turns sharply left. At the next sharp left turn, two cairns to the right and a red/blue arrow on a tree to the left mark the start of the red/blue-blazed Bluebird Trail. Turn right onto the Bluebird Trail, which follows around the side of a hill, then climbs gently. After turning left onto a woods road, the trail climbs rather steeply on switchbacks. It passes a limited west-facing viewpoint and ends at a junction with the Stillman/Highlands Trail (yellow and teal diamond blazes).

Turn left, uphill, and continue on the Stillman/Highlands Trail. A short distance ahead, you’ll reach the northern end of the blue-blazed Howell Trail, which leaves to the right. Bear left here, continuing along the yellow/teal diamond-blazed trail, which follows a relatively level route. After a short, steep climb, you’ll reach a limited view to the northwest. The Metro-North Railroad’s Moodna Viaduct is directly ahead, with Schunemunk Mountain to its left. A few minutes ahead, you’ll come to a viewpoint looking north over the Hudson River. North and South Beacon Mountain are to the right, and the Newburgh-Beacon Bridge is visible in the distance.

Proceed ahead, past the summit of Storm King Mountain. You’ll come to a broad but somewhat obstructed north-facing viewpoint, but continue ahead for a short distance until you reach a panoramic, unobstructed viewpoint over the Hudson River, with superb views. Pollepel Island, with the ruins of Bannerman’s Castle, is directly below. To the east, Breakneck Ridge (marked by the rail tunnel) is visible across the river. The stone building at the foot of Breakneck Ridge (partially obscured by vegetation) caps a shaft of the Catskill Aqueduct, which tunnels over 1,100 feet below the river. North Beacon Mountain (with communications towers) and South Beacon Mountain (with a fire tower) are to the northeast, and the Newburgh-Beacon Bridge crosses the river in the distance. Beyond, the Shawangunks and Catskills can be seen on a clear day. To the left, the village of Cornwall is below, along the west bank of the river. The rail line running along the east shore of the Hudson is Metro-North’s Hudson Line (also the route of Amtrak trains to Albany). 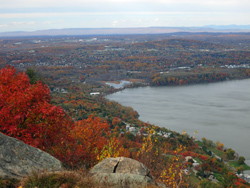 The Stillman/Highlands Trail now continues to descend, soon reaching a junction with the white-blazed By-Pass Trail. Continue along the yellow/teal diamond-blazed Stillman/Highlands Trail, which turns sharply left, immediately reaching a panoramic viewpoint from rock ledges on the right. This viewpoint faces south, with the village of Cold Spring visible across the river to the southeast, and Constitution Island jutting into the river just beyond. Even better views can be had from rock ledges a little further along the trail.

Soon, the Stillman/Highlands Trail bears left and descends along a beautiful stretch of sidehill trail, through hemlocks and laurel This narrow trail is quite rocky and can be slippery when wet or covered with snow or ice, so use caution. After passing another panoramic viewpoint to the north, the trail descends on a switchback. About a third of a mile further on, the trail goes down another switchback and crosses a wooden bridge over a steep drop at the edge of a cliff.

Shortly thereafter, you’ll reach the junction with the Bluebird Trail that you encountered earlier in the hike. Turn right and continue to follow the yellow-blazed Stillman Trail, retracing your steps back to the parking area where the hike began. This loop climbs to the summit of Storm King Mountain, with many spectacular viewpoints over the Hudson River and the Highlands.

From the parking area, proceed uphill on a wide gravel road, following the yellow blazes of the Stillman Trail. In...

Take the Palisades Interstate Parkway to its northern end at the Bear Mountain Circle. Continue north on U.S. Route 9W for 8.6 miles and turn right onto Mountain Road. Follow Mountain Road for 0.7 mile to a small parking area on the right side of the road, in front of stone walls and pillars (just past 187 Mountain Road).

rate experience
July 29, 2018
0
Trailhead GPS coordinates have been corrected
<p>The trailhead GPS coordinates for this hike were indeed incorrect.&nbsp; They have been corrected.</p>
Daniel Chazin
July 29, 2018
0
directions to the trailhead are off
I followed GPS coordinates to get to the beginning of the trail but seems like they are off-base. This is what has been posted on here: 41°26'52.3"N 74°01'49.9"W, which leads you to a village north of storm king state park
mike.burkov
March 11, 2016
0
Be careful of ice in the winter
<p>I did this hike last weekend. The previous weekend I was in a different area of this park, and had no snow/ice the whole trip.&nbsp;</p> <p>&nbsp;</p> <p>I brought my microspikes with me, which seemed like overkill (given there was no snow on the ground), but I had remembered hiking here before &amp; had a recollection that the trail was narrow and could be icy. I'm very glad I brought them. Even though there was no snow, the Stillman Trail had some bad ice flows. I met some hikers who had no microspikes and they found it very difficult and had to hike off trail. I did bring microspikes, but they were not even adequate in some areas with very hard ice (they weren't biting into the ice adequately).&nbsp;</p> <p>&nbsp;</p> <p>Some photos showing the ice across the trail:</p> <p>http://agiletrekker.blogspot.com/2016/03/stillmanhighlandsbluebird-trails-loop.html</p> <p>&nbsp;</p>
TrekkerHikes
More Reviews
Log in or register to post comments