From the parking area, head west on Route 344 (going back the way you came), crossing a stone bridge over Cedar Brook. Just beyond the bridge, turn right at a sign “To campground .75 miles,” climb wooden steps, and head uphill on a woods road, following the white blazes of the South Taconic Trail. After climbing rather steeply, the trail levels off. In 0.3 mile, the white blazes turn sharply right (at a sign for the South Taconic Trail) and climb steeply on a footpath.

At a fenced-in area, the South Taconic Trail turns left onto a woods road. Here, it is joined by the red-blazed Sunset Rock Trail. The two trails will run concurrently for the next 1.7 miles. The trails continue to climb and, in another 0.2 mile, they are joined by the yellow-blazed Gray Birch Trail, which comes in from the left. After climbing some more, the yellow trail leaves to the left, but you should continue ahead, following white and red blazes.

Soon, the grade moderates, and then the trails level off, with some minor ups and downs. In 0.6 mile, the blue-blazed Cedar Brook Trail begins on the right. A short distance beyond, the uphill grade resumes, and the trails climb steadily on a rocky footpath. As the trails approach the crest of the rise, the vegetation changes to a dense mix of mountain laurel, scrub oak and pitch pine, with an understory of blueberry.

Just over two miles from the start of the hike, the trails emerge onto a small open area. Here, a sign “Sunset Rock” points to the left. Turn left and follow a footpath for about 500 feet, through dense vegetation, to Sunset Rock (elevation 1,788 feet) – a panoramic west-facing viewpoint. The rural countryside of the Harlem Valley is visible below, with the Catskills in the distance. To the south, you can see both Alander Mountain and Mt. Everett. You’ll want to take a break here to enjoy the views and rest from the elevation gain (to this point) of over 1,000 feet. 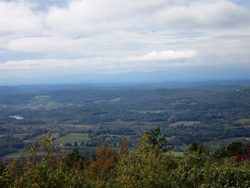 When you’re ready to continue, return to the South Taconic Trail and turn left. The trail (now blazed only white) proceeds on a level route through a canopy of overhanging trees, then bears left at a fork and descends on a footpath to the unpaved Sunset Rock Road. It turns left and follows the road for 100 feet, then turns right and reenters the woods, crossing a brook and passing an old springhouse on the right.

The South Taconic Trail now begins a steady climb of Prospect Hill, soon reaching another area with dense mountain laurel and scrub oak. After climbing about 200 vertical feet in a third of a mile, you’ll reach the summit (elevation 1,919 feet), with a New York-Massachusetts boundary marker (erected in 1898) on the right. Just beyond, you’ll come to another panoramic west-facing viewpoint over the Harlem Valley, with the Catskills in the distance. 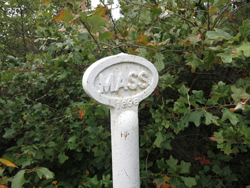 The trail continues through the woods on a relatively level footpath, with some minor ups and downs. In a mile and a half, after a short, steep climb through dense scrub oak thickets, the trail reaches the summit of Mount Fray, with a west-facing viewpoint.

A short distance beyond, the trail emerges onto the Ridge Run ski trail of the Catamount Ski Area. It turns right and follows the wide ski trail, lined with snow-blowing equipment, downhill for about half a mile (this section is rather sparsely blazed). Along the way, the Catapult and Upper Turnpike ski trails begin on the left (with west-facing views at each ski trail), but you should continue ahead on the Ridge Run ski trail. After passing the Upper Turnpike

ski trail, keep a close watch on the left for a turnoff (marked by a sign painted on snow-blowing equipment) and follow the South Taconic Trail as it turns left and proceeds through the woods on a footpath.

The South Taconic Trail soon emerges onto another ski trail. It crosses the ski trail and reenters the woods 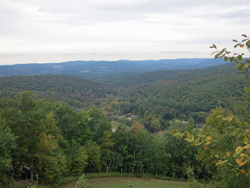 on a woods road to the left of a first-aid station (do not follow the Upper Promenade ski trail, which begins on the left). The white-blazed trail climbs a little, passes a panoramic west-facing viewpoint, and reaches a long rock outcrop at the crest of the rise. It then descends, bearing right at the next intersection.

In a quarter mile, the white-blazed trail turns sharply right, leaving the woods road, and climbs steeply on a footpath (this turn is easily missed; if you notice xxxxx blazes on a tree, you’ve gone too far). After a short but steep climb to elevation 1,510 feet, the trail bears left and levels off. Soon, it begins a rather steep descent. Near the base of the descent, it crosses an open field (with buildings visible on the left) and reeenters the woods. A short distance beyond, the trail joins a dirt road coming in from the left and continues to descend.

The trail bears right at the next intersection but, with Route 23 visible ahead, it turns sharply left and curves around to end at Route 23, a little further west. Turn left and follow the road for about 500 feet to the parking area where you left the first car. This one-way hike on the northern end of the South Taconic Trail climbs to a series of panoramic viewpoints.

This hike traverses the northern section of the South Taconic Trail, from Route 344 (near Bash Bish Falls) to Route 23, just east of the New York-Massachusetts state line. For the entire hike, you’ll be following the white blazes of the South Taconic Trail. Although there are relatively few steep climbs, the hike involves a total elevation gain of over 1,500 feet....

This one-way hike requires two cars. From the George Washington Bridge, proceed north on the Henry Hudson Parkway, which becomes the Saw Mill River Parkway. Take Exit 4 and continue on the Cross County Parkway, then bear left to follow the northbound Hutchinson River Parkway. In eight miles, bear left and continue on I-684, which becomes N.Y. 22. Follow Route 22 for about 58 miles to N.Y. 23 in Hillsdale, N.Y. Turn right onto Route 23 and continue for about three miles to the New York-Massachusetts boundary (just past the entrance to the Catamount Ski Area). Just beyond, turn right into a large parking area on the south side of the road. Leave the first car here.