For its entire length, this hike follows the yellow-blazed Terrace Pond West Trail, which offers a loop hike to the pond and back from Parking Area P7 on Clinton Road.

From the parking area, cross the road and enter the woods at a kiosk. Turn right to follow the yellow-blazed Terrace Pond West Trail in the counter-clockwise direction. You now follow a rocky trail through mountain laurel, hemlock and white pine, crossing several wet areas on puncheons and large rocks.

In about half a mile, the trail goes through a magnificent rhododendron grove, with the large rhododendrons 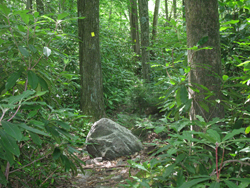 forming an arch over the trail in places. Soon after you leave the rhododendron grove, the laurel and evergreens end, and you proceed through a second-growth forest of deciduous trees. After following an interesting whaleback rock and crossing two low stone walls, the yellow trail turns left onto a woods road lined with ferns. You’ll be following woods roads, with gentle grades, for the next mile. 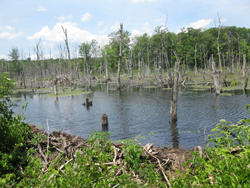 The trail continues along the woods road, which once again begins to run along the swamp on the left, with much beaver activity visible in the swamp.  Just beyond the end of the swamp you’ll reach a junction with the Yellow Dot Trail, marked with yellow-on-white blazes. Bear left to continue along the yellow-blazed Terrace Pond West Trail, which follows a relatively level footpath through a deciduous forest, with an understory of mountain laurel and blueberry.

Soon after passing the end of the Terrace Pond Red Trail on the right, the Terrace Pond West Trail descends rather steeply to cross a stream. It then begins a steady climb, reaching jumbled lichen-covered boulders near the crest of the rise. A short distance beyond, you'll come to a southeast-facing viewpoint from a rock outcrop.

After a short level section, the trail bears left and continues along another rock outcrop. Like the previous outcrop, this one is composed of reddish-purple "puddingstone" conglomerate rock, with quartz pebbles embedded in the rock.

After following the outcrop for some distance, the trail descends to the right and follows another relatively level section. It climbs along another rock outcrop, then steeply climbs over rocks to reach a seasonal viewpoint to the east through the trees. Just beyond, Terrace Pond itself may be seen below to the right (when there are no leaves on the trees).

Continuing along its rugged, rocky route, the yellow trail passes to the left of a huge boulder with some interesting crevices that you can walk through. There is a view over Terrace Pond from the top of the boulder. Just beyond, the Terrace Pond West Trail descends steeply over rocks to reach a junction with the white-blazed Terrace Pond Circular Trail. Turn left and follow the joint yellow/white trail. A short distance ahead – just beyond another rock scramble – you’ll reach an open area along the lakeshore. This is a great spot to take a break and enjoy the beauty of this secluded glacial lake. 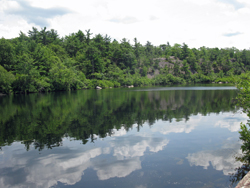 When you’re ready to continue, proceed north along the yellow/white trail. Soon, you’ll come to a junction where you’ll notice a triple white blaze (indicating that the Terrace Pond Circular Trail technically begins and ends here).

Turn left and continue to follow the yellow blazes of the Terrace Pond West Trail, which crosses several wet areas on rocks and logs. After a short climb, you’ll emerge onto a large open rock outcrop. Just to the left of the trail, there are panoramic west-facing views from the top of a peak of conglomerate rock. This is another good spot for a break.

Continue along the yellow trail, which makes several short, steep descents (and a few short climbs). After a relatively level stretch, the trail descends rather steeply. At the base of the descent (and before beginning the next steep descent), you’ll notice a steep rock outcrop immediately to your left. Climb this outcrop for another panoramic view to the west and northwest.

Soon afterwards, you’ll come out onto a wide cut for a gas line. Bear left here and follow along the left side of the steep and eroded gas line for about 450 feet to the bottom of the hill. Here, the yellow trail re-enters the woods on the left and goes around a locked gate. The trail leads in about half a mile, over relatively level terrain, back to the trailhead, crossing several wet areas on rocks. For its entire length, this hike follows the yellow-blazed Terrace Pond West Trail, which offers a loop hike to the pond and back from Parking Area P7 on Clinton Road.

From the parking area, cross the road and enter the woods at a kiosk. Turn right to follow the yellow-blazed Terrace Pond West Trail in the counter-clockwise direction. You now follow a rocky trail through mountain...

Take I-287 to Exit 57 (Skyline Drive) and continue on Skyline Drive to its western terminus at Greenwood Lake Turnpike (County Route 511). Turn right and proceed north on Greenwood Lake Turnpike. When you reach a fork at 8.3 miles, bear right to continue on Warwick Turnpike (still County Route 511). Proceed for another 2.3 miles and turn left onto Clinton Road. Continue on Clinton Road for 1.7 miles to a large parking area (designated as P7) on the right side of the road, about 0.2 mile south of a gas pipeline crossing (and just north of the entrance to the Wildcat Mountain Wilderness Site - Project U.S.E.).

rate experience
September 11, 2016
0
Miss the early years!
I hiked the terrace pond loop today and I'll tell you what a dump that place has become. Below the second rock outcropping ( off the blue trail ) is loaded with plastic bottles, broken glass and empty cardboard packages. Couldn't get to the pond overlook because of a big party going on. I remember back in the day around 2004-05ish this place was a very less visited spot. I remember there was no trash, graffiti and broken glass along the way. The pond itself was peaceful on a Saturday or sunday. Whatever! I'm done with hiking that place during the summer season.
acolo1234
July 31, 2016
0
Parking at P7 for on Clinton Rd
Take Note:  There is new signage in place at Parking P7 used for Terrace Pond Trails.  Vehicles parked before 8 a.m. and after 8 p.m. will be towed by West Milford PD and NJ State Park Police.  There is continual problems with illegal swimmers, graffiti and mounds of trash left behind.  This affects the enjoyment of others who wish to hike to and around the Pond.  This requires State employees and NYNJTC volunteers to continually remove mounds of garbage as well as covering graffiti.  Not to mention the need for Search & Rescue on a frequent basis.   Therefore, parking is restricted at P7 to Park hours only.  The other parking lot will eventually be completely closed and parking along the road shoulder will be prohibited.
Estelle
July 01, 2014
0
Hiking permit is not required
As is made clear in my response to a comment below, Parking Area P-7 is on Wawayanda State Park property.  This parking area is not on the property of the Newark Watershed.  The hike itself also traverses lands of Wawayanda State Park.  Apparently, two years ago, an employee of the Newark Watershed mistakenly placed warning notices on cars parked in Parking Area P-7.  When the authorities were contacted, they admitted that this was an error on their part.  Hikers may park in this parking area and do this hike without obtaining any permit.
Daniel Chazin
More Reviews
Log in or register to post comments