On a tree adjacent to the parking area, you'll notice two triple blazes. The triple white blaze marks the start of the Wildcat Mountain Trail, while the triple green-stripe-on-orange blaze marks the start of the Townsend Trail. Head into the woods, following both white and green-stripe-on-orange blazes, and cross a stream on large stepping stones. The trails continue along a woods road, passing old stone walls and foundations.

In a third of a mile, you’ll come to a junction where the two trails diverge. Bear right and continue on the green-stripe-on-orange-blazed Townsend Trail, which passes a small body of water – impounded by a stone dam – on the right and continues uphill on a woods road through a valley. Watch carefully for a double blaze, which indicates that the trail turns right, leaving the road to bypass an eroded section. It crosses a stream on rocks and bears left to parallel the stream. 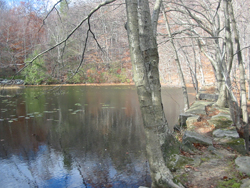 The trail rejoins the road, then again turns right and proceeds on a footpath higher on the hillside, bypassing another eroded section of the road. After rejoining the road once more, the trail reaches the crest of the rise and begins to descend.

After crossing another stream, the Townsend Trail reaches a rock ledge, with a view ahead through the trees. Here, the trail turns right and, in another 50 feet, it turns right again. At the second right turn, follow an unmarked trail that bears left and comes out on a long rock ledge, with a panoramic view to the southeast over the hills of Sterling Forest and Harriman State Park. Route 17A is visible directly below, with the New York Thruway in the distance.

After taking in the view, return to the marked trail and turn left. The trail now climbs to arrive at another rock ledge, just to the left of the trail, which features a large cairn and offers a view to the southwest over the Indian Kill Reservoir.

From the second viewpoint, the trail climbs to a high point and then descends to reach a junction with a wide gravel road. Turn left on the road, which continues to descend.

After half a mile along the road, you’ll come to a T-intersection, where a triple blaze marks the end of the Townsend Trail. Turn right onto another wide gravel road, the route of the Long Meadow Extension Trail, which is marked with white-stripe-on-green blazes (as well as blue markers indicating that the trail is also open to cross-country skiing and mountain biking). Signs point out that the trail follows the route of a gas pipeline.

At first, the road climbs steadily (this section was formerly paved, and you can see the crumbling asphalt). After reaching the highest point, the road becomes grassy and more pleasant. About a mile along the road (a quarter-mile beyond a cable barrier by a hunters’ parking area), there is an interesting lichen-covered balanced boulder on the left.

The trail ends at a gate just before reaching Orange Turnpike, where Hall Drive comes in from the right. Bear right and continue on paved Hall Drive for 500 feet to the parking area where the hike began. On a tree adjacent to the parking area, you'll notice two triple blazes. The triple white blaze marks the start of t...

Take N.J. Route 17 north to the New York State Thruway and take the first exit, Exit 15A (Sloatsburg). Turn left at the bottom of the ramp onto N.Y. Route 17 and continue for 8.6 miles to Orange Turnpike in Southfields. Turn left onto Orange Turnpike for 0.6 mile, then turn left at Hall Drive and proceed for 500 feet to a gravel parking area on the left side of the road.

rate experience
September 17, 2020
2
Easy Walk If You Want to Talk
I joined and old friend and his wife for this loop hike and conversation on Labor Day weekend 2020. This is a mostly easy hike with minimal ups and downs and a lot of walking on 2-track gravel and dirt roads. The small pond and dam are a photogenic spot and we enjoyed an apple break and the view on the rock ledge. A note on the description: at the T-intersection at the end of the Townsend Trail, there is a gate across the road, not mentioned in the notes but a significant landmark.
glennagrube
November 06, 2018
3
Beautiful hike but TICKS EVERYWHERE!
This hike started off wonderfully, but unfortunately came to an abrupt end upon entering the Long Meadow Trail area. There were ticks EVERYWHERE and I was actually wearing full tick permethrin gear as well as repellent. They covered me! Luckily I was able to pick them off before they bit, but I did have to remove some clothing on the side of the road. Not the most fun! I'm looking forward to going back in the winter when hopefully there is less of a chance of that.
RachyLovesRattys
October 18, 2015
0
good hike
<p>Just did a quick hike today. The path was well marked and it seemed to go quicker than the time indicated. Highly recommend if you want a short hike and have the rest of the day to do something.</p>
kalex12
More Reviews
Log in or register to post comments