The hike begins at the western end of the parking area, where a gatepost with a triple light-green blaze marks the start of the Otter Hole Trail. You'll be following this trail for the first third of a mile (other trails, such as the "L" Trail and the "W" Trail, are co-aligned for part of the way). Go around the gate and continue along the driveway leading into the New Weis Center, lined on both sides with Norway spruce trees. Bear right at the first fork, but when you reach a chain across the road, turn left, then immediately right (do not cross the brook). Continue to follow the light-green blazes, with a line of spruce trees on the right and Blue Mine Brook on the left.

Soon, the trail bears right to skirt the Highlands Natural Pool. Built about 70 years ago, this pool is fed by the brook and is not chlorinated. For more information on this pool, see www.highlandspool.com. The trail briefly joins a dirt road, then bears left and ascends on a footpath, passing the weir that regulates the supply of water to the pool.

The trails level off and reach a junction where they split. The Mine Trail turns left, but you should continue ahead, following the blue blazes of the Hewitt-Butler Trail. After a short level section, the trail begins a steady climb. At the top, a rock outcrop to the right of the trail offers a west-facing view, with Assiniwikam Mountain visible to the right (northwest). Just beyond, the white-blazed Macopin Trail begins to the right, but you should continue ahead on the Hewitt-Butler Trail. Soon, you'll come to a balanced rock atop a rock ledge, with views west, east and north.

After a relatively level stretch, you'll reach a junction with the red-on-white-blazed Wyanokie Circular Trail (also the route of the teal-diamond-blazed Highlands Trail). Turn left and follow these trails, which make a short but steep climb to the summit of Wyanokie High Point. The last part of the climb is over bare rock, with the trail marked by blazes painted on the rock.

The summit offers panoramic views to the southeast over the Wanaque Reservoir. To the east, beyond the reservoir, you can see a long bridge carrying I-287 over a low area and, on a clear day, the New York City skyline may be seen on the horizon. To the north and west are Saddle, Assiniwikam and Buck Mountains.

After spending some time savoring the views from this magnificent location, surrounded by pitch pines, follow the red-and-white and teal diamond blazes as they descend from the summit, passing more views of the Wanaque Reservoir along the way. The trees in this area have died as a result of droughts and gypsy moth infestations, so the blazes are painted on rocks and occasional tree stumps.

The trail eventually goes back into the woods and bears left, with the descent becoming less steep. At the base of the descent, the white-blazed Lower Trail begins to the right. Just beyond, the trail crosses a stream, and soon afterwards, the yellow-on-white Mine Trail joins from the left. Proceed ahead, now following three different trail blazes.

A short distance ahead, you'll notice on the left the ruins of a stone shelter, constructed by members of the Green Mountain Club in the 1930s. The trail now approaches Blue Mine Brook. Just before reaching the brook, there is a circular mine pit to the right of the trail, with a small pile of tailings (discarded waste rock) to its left. The trail crosses the brook on a wooden footbridge, built as an Eagle Scout project in 2002.

Go back to the footbridge (do not recross it). Just beyond, the teal-diamond-blazed Highlands Trail diverges to the right, but you should continue ahead on the joint Mine/Wyanokie Circular Trails, which follow a rocky woods road. Bear left at a fork and continue ahead for about a quarter of a mile until the two trails separate. Here, you should turn right and follow the yellow-on-white blazes of the Mine Trail, which climbs on a narrow woods road, once used to access the Roomy Mine. At the top of a rather steep pitch, the Mine Trail turns sharply right, but you should continue ahead on the orange-blazed Roomy Mine Trail (following the sign to the "mine").

At the top of the rise, the entrance to the Roomy Mine is on the right. Named for Benjamin Roome, a local land surveyor, the mine was opened shortly after 1840 and worked until 1857. The mine shaft extends about 60 feet into the hillside, but it is presently closed to the public.

Continue to follow the orange blazes of the Roomy Mine Trail along the mine road. Soon, the trail bears right onto another road (the red-on-white-blazed Wyanokie Circular Trail ends here). A short distance ahead, at a huge boulder, turn left and continue to follow the Roomy Mine Trail, which climbs over a rise and passes interesting rock outcrops.

After a jog to the right, the trail crosses Blue Mine Brook above a waterfall, turns right and briefly follows the brook, then turns left, away from the brook. The trail parallels a rocky escarpment on the right and continues to a junction with the yellow-on-white-blazed Mine Trail. Here, the Roomy Mine Trail ends, and you should turn right onto the Mine Trail. The trail is level at first, then climbs steadily. Near the top, you'll pass some interesting jumbled boulders and rock outcrops on the right.

At the top of the climb, turn right, joining the blue-blazed Hewitt-Butler Trail. Now following both blue and yellow-on-white blazes, descend steeply to Snake Den Road, here a dirt road. The Hewitt-Butler and Mine Trails end here, but you should cross the road and continue ahead on the green-blazed Otter Hole Trail, retracing your steps past the Highlands Natural Pool and along Blue Mine Brook and ending at the parking area where the hike began. 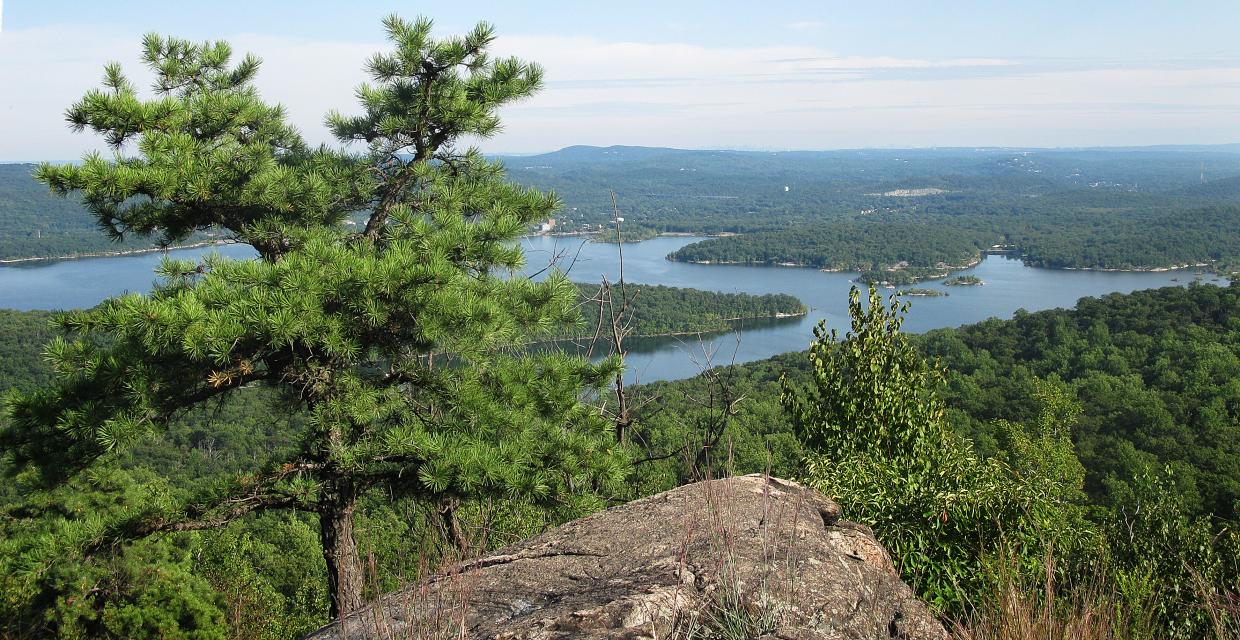 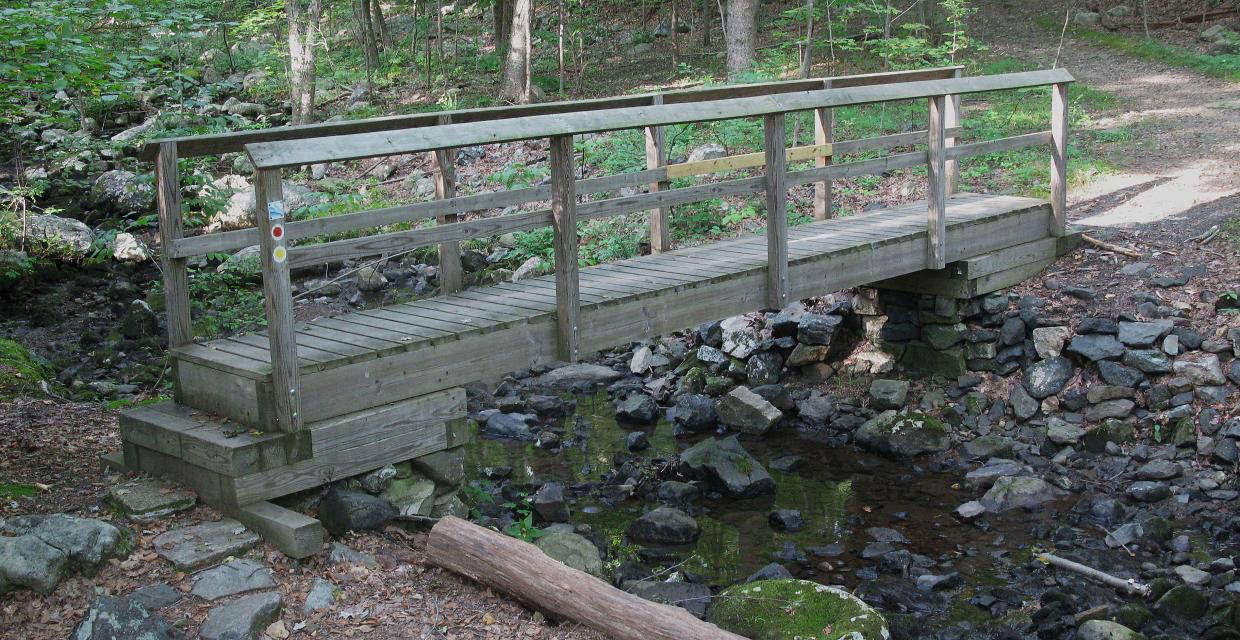 This loop hike passes by an old iron mine and climbs to an outstanding 360° viewpoint from which the New York City skyline can be seen.

The hike begins at the western end of the parking area, where a gatepost with a triple light-green blaze marks the start of the Otter Hole Trail. You'll be following this trail for the first third of a mile (other trails, such as the "L" Trail and the "W" Trail, are co-aligned for part of the way). Go around the gate and continue along the driveway leading into the New Weis Center, lined on...

Take Skyline Drive to its northwestern end at Greenwood Lake Turnpike (County Route 511). Turn left and proceed south for 1.6 miles to West Brook Road. Turn right onto West Brook Road and cross the Wanaque Reservoir on a causeway. At the next T junction, turn left, then take the second left onto Snake Den Road. Continue for 0.6 mile to a large dirt parking area on the right side of the road, just before the entrance to the New Weis Center.

rate experience
January 01, 2017
5
Great views but weird trail layouts
Did this hike in late september. The views from the high point are phenomenal. The left turn at the "large boulder" threw me off, though. Maybe I missed a turnoff. Make sure you take a map with you on this one, because part of the Roomey trail loops in on itself.
bromli
April 27, 2013
0
This was an amazing hike for
This was an amazing hike for my family!!! We absolutely loved it and the perfectly detailed directions were wonderful. Thank you so much.
rebeccavdh
March 19, 2009
0
Swimming Information

The Highlands Natural Pool welcomes visitors. For a modest fee you can spend the day and try us out! You can get more details on our website, http://www.highlandspool.org, or by calling 973-835-4299.