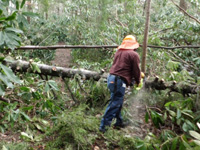 • At the eastern end of that powerline project, construction began and volunteers have been diligent in tracking trail impacts and communicating them to the public.

• Together with federal, state and nonprofit organizations, the Trail Conference secured funding and is deploying work crews to mitigate the damages, erosion and trail navigation issues caused by construction along the Tennessee Gas Pipeline.

• Our West Jersey Crew made numerous repairs and trail improvements, including replacing the storm-damaged Howell Trail Bridge and realigning a segment of the Appalachian Trail on the Kittatinny Ridge, which has opened up new ridge top views north of the Delaware Water Gap.

• Volunteers in the northern Highlands completed the installation of 8 informational kiosks in West Milford, making the township’s vast trail system safer and easier to navigate. 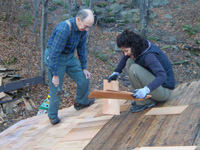 • We have been instrumental in moving ahead with the Kaaterskill Rail Trail. This Rail Trail is being built to support eco-tourism in the Catskills by connecting the Village of Haines Falls to the popular North & South Lake State Campground.

• With help from the Christopher Nowak Memorial Fund and the Catskill 3500 Club, we replaced the roof and floor of the Mink Hollow Lean-to on the Devil’s Path.

• The Trail Conference is building over 9 miles of new trail to move the Long Path off the roads and into to forest. The new trail will also connect the village of Phoenicia to some of the Catskills most spectacular hiking destinations including Terrace Mountain Lean-to, Romer Mountain, Wittenberg, Cornell and the Catskills’ highest peak, Slide Mountain (4,180').

• The Trail Conference worked with partners to attract resources and attention from New York State to the Catskill Park.

• We established a roving Catskill Trail Crew to work on the over 200 miles of Trail Conference-adopted Catskill trails.

• As members of the DEC’s Forest Preserve Advisory Committee, we are advocating for preservation and recreational trails, including voting for strict restrictions on fracking in the Catskill Park.

• The Trail Conference co-sponsored the 9th Annual “Lark in the Park,” a week-long celebration of the Catskill Mountains, which included over 40 different activities across the region.

• Trail Conference volunteers completed the installation of an 1,600 foot boardwalk across the Swamp River and wetland in Pawling, NY. It is now a popular hiking destination as well as a key crossing along the Appalachian Trail.

• Along the Appalachian Trail in Fahnestock State Park and on trails in Teatown Lake Reservation, more than 180 volunteers provided trail maintenance, including the installation of stone steps. And, in Wonder Lake State Park, Trail Conference volunteers completed a new one-mile trail that makes possible a nice 5+mile loop hike.

• The Trail Conference partnered with the Teatown Trail Ambassadors to build interest in hiking among teens who have successfully performed on-going trail inventory and maintenance.

• The Greens to Green Conservancy at the French-American School of New York (FASNY) is in the process of creating an 80+ acre nature preserve in White Plains with support from the Trail Conference.

• The Trail Conference developed materials for the Girl Scout Centennial Celebration at County Center in White Plains, and generated interest from 160 Troop Leaders. 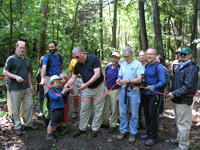 • Restoration of Hurricane Irene-damaged bridges. In Harriman State Park, volunteers replaced the Kakiat, Seven Hills and Pine Meadow Trails bridge and several smaller bridges. A major bridge over the spectacular Popolopen Gorge will be finished by year’s end. In Minnewaska, the Blueberry Run Bridge over the Peters Kill has been designed and its abutments will be constructed by end of year.

• Land preservation: the Trail Conference worked closely with the state Dept. of Environmental Conservation and land conservation groups to protect lands along the Shawangunk Ridge Greenway. This year we preserved the 435-acre Ridgeview property and a 90-acre parcel on the Shawangunk Ridge in Greenville, both in partnership with Open Space Institute and Orange County Land Trust.

• Long Path: by the end of 2012, our Long Path South volunteers will have opened a new route for the Long Path across Orange County, connecting Schunemunk Mountain and the Shawangunk Ridge via the Heritage Trail and other County lands. The new route will significantly reduce road walking. Earlier in the year they had opened a new link for the LP from the Gunks to the Catskills by completing the Mine Hole Trail at Minnewaska State Park Preserve.

• At Fort Montgomery, we are beginning to create a new trail route linking Brooks Lake with Popolopen Torne. This connector will provide hikers with a new scenic loop to explore.

• At the popular Fitzgerald Falls area, our Jolly Rovers technical rock work crew is halfway done with a project to improve safety, stabilize the environment and enhance the aesthetics of the Appalachian Trail (AT) at this challenging location. This project also is set to be completed in 2013.

• At Bear Mountain, we completed final plans and received a grant to complete the rerouting of the AT. We also began extensive repairs and reroutes of the very popular Major Welch Trail. The work is being accomplished as field work by volunteers enrolled in a series of Trail U workshops.

• Volunteers cleared over 800 blowdowns (fallen trees) from our trails. By the end of 2012 and in the wake of Hurricane Sandy, we’ll have cleared many hundreds more.

• Our Invasives Strike Force Crew is working to eradicate harmful invasive plant species on our hiking trails and has made exceptional progress this year:

Please Give Now to Support the Trails You Love.