Ramapo Trail Crew: Finding Joy in Even the Hardest Challenges

Ramapo Trail Crew: Finding Joy in Even the Hardest Challenges 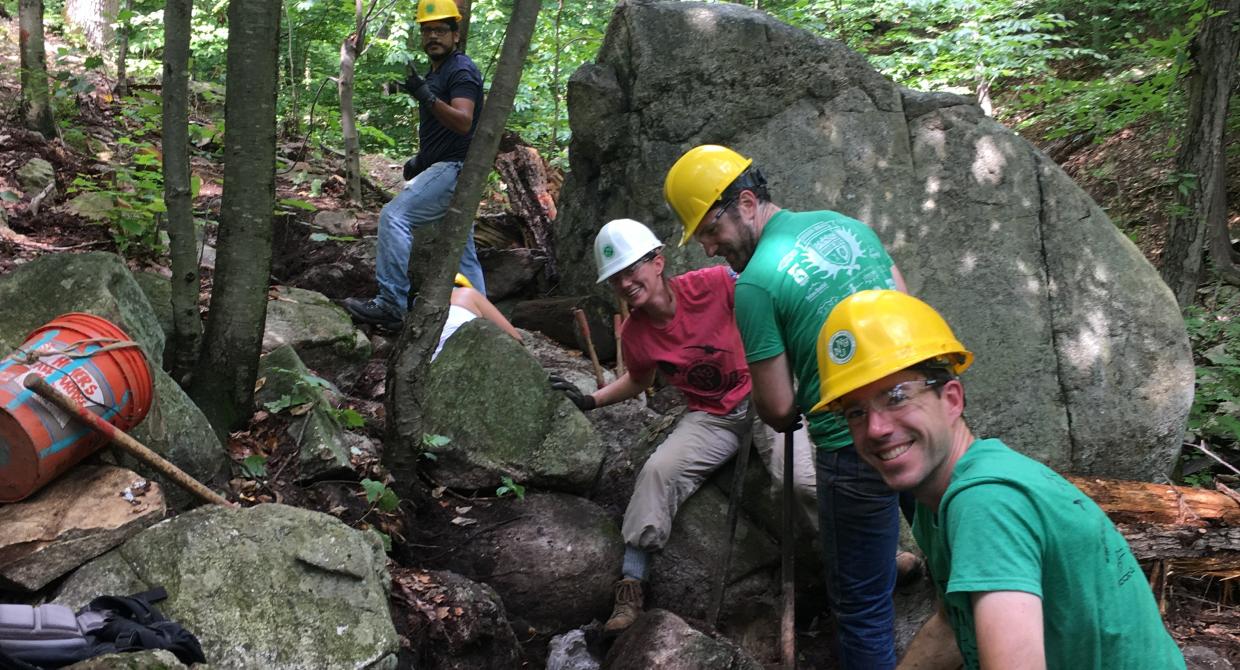 The Ramapo Trail Crew completed the construction of a stone staircase near a popular waterfall on the Vista Loop Trail in Ramapo Valley County Reservation.

The backbone of the crew was Conservation Corps members Shane Caffrey, Ryan McLean, and Nicole Vargas, led by Emma Chilton.

This season was many things. There were times when it felt like a whirlwind, and times when it felt like time was dragging on forever. There were incredibly frustrating weeks, and ones where it seemed everything was seamlessly falling into place. Overall, it was everything we could have imagined it to be and more. We accomplished exactly what we set out to do—build a sustainable and beautiful trail. In doing so we made memories and friendships that we will cherish forever.

The most frustrating, but ultimately satisfying part of the trail was the bedrock staircase. It involved two whole months of chipping away at the stone. We tried double jacking it, using shaping hammers, using larger shaping hammers with the double jack, using the drill, using a chisel bit on the drill, using a bull point bit—pretty much anything that might get us through the stuff, we tried. What finally worked well was this stuff called EcoBust. It is basically cement that you pour into drilled holes, and as it dries it splits the rock apart. Finally breaking away enough rock to set the staircase was an incredible feeling. When we set the last step, I almost cried I was so happy.

We certainly could not have had a successful season without all our volunteers. They were some of the most memorable parts of our time in the woods. Taking people who had no idea that trail work was even a thing and showing them how to crush rocks and define tread was very fulfilling. Through teaching, we all honed our own skills and learned how to explain concepts more clearly. In the rough times, the constant flow of volunteers with their fresh energy and drive helped brighten our days. During the triumphant moments, it was wonderful to have volunteers to share our successes.

I think the thing we’ll remember most from this remarkable season is the laughter. I’ve laughed more in those six months of working outside with the crew than I have my whole life. Finding that level of joy in what you’re doing is infectious; it bleeds into all parts of your life, making the world seem like a better place. That’s what I’ll take with me the most—that the ability to laugh can make anything bearable, and can make everything enjoyable.