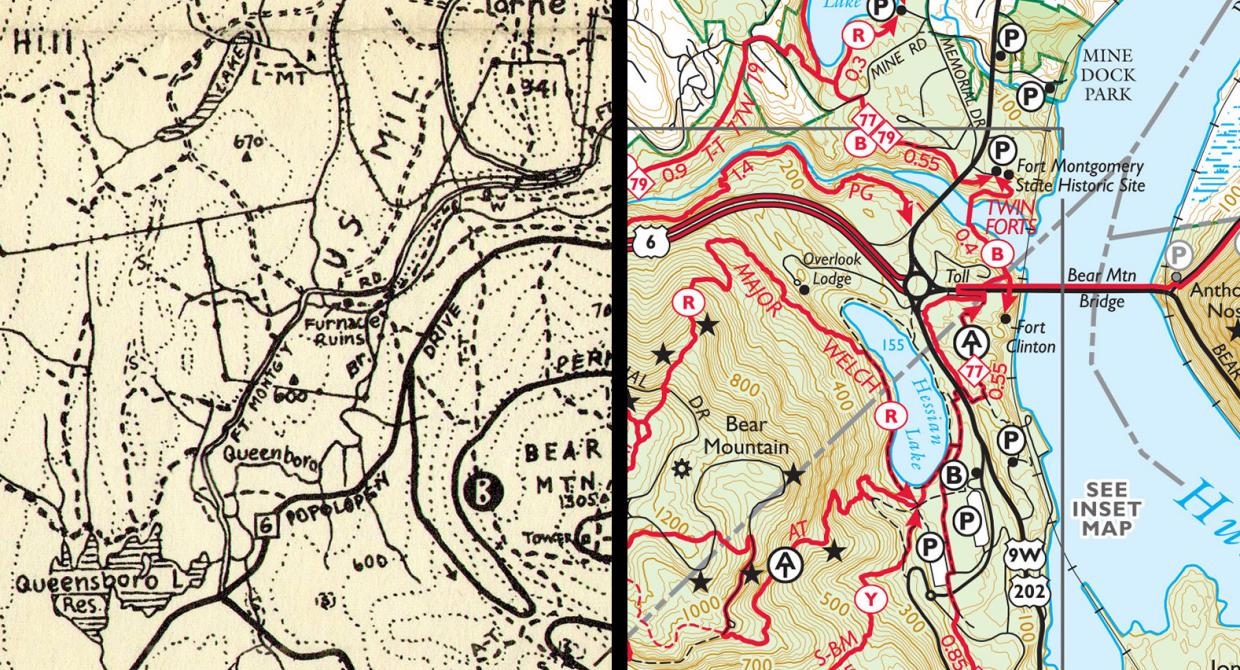 How has trail map design evolved over the last 100 years?

Pick up any of our maps, and you can immediately tell it has been produced by the Trail Conference based on a few hallmark features: an uncluttered design, limited color palette, prominent trail network, and rugged Tyvek.

This past fall, the New York Map Society invited me to talk about trail map history at the iconic main branch of the New York Public Library, and I was able to piece together a fascinating, 100-year progression of trail map design.

The first real trail maps in our area were a series of Hikers Region Maps, first produced by William Hoeferlin in 1934. While these maps were entirely in black ink, they did use circled letters to indicate blaze colors, a method still used today.

Hoeferlin died in 1970, leaving a void in trail map availability. The Trail Conference picked up this mantle, and in 1975, the debut edition of Harriman-Bear Mountain Trails became the first standalone map to have red trail lines. It split up a large area into two smaller maps, and was our first Tyvek map set.

Over the next 15 years, several map iterations allowed for the experimentation of various designs. It wasn’t until the 1989 edition of Harriman-Bear Mountain Trails that our maps had developed consistent design components, such as red solid lines for trails, brown contours, green parklands, and thick Tyvek. In 2000, our first digitally produced map of Sterling Forest further experimented with map design, such as shaded relief and colored elevation shading. By 2007, when I became staff cartographer, the look of our maps had largely shifted back to a design used in the late ’80s and early ’90s, which, for the most part, can still be seen today.

As of 2018, the Trail Conference has printed about 800,000 maps since the early 1970s! Our easy-to-read design that has developed over more than 45 years is a key reason why our maps have continued to serve the trail-using public.

As the Trail Conference cartographer for more than 10 years, I have received praises on the quality of our maps, as well as many inquiries about them. The purpose of this column is to share some answers to certain questions I regularly receive. If you have a question about our maps, email [email protected] and include “Map Talk Question” in the subject line. Your question might appear in the next issue of Trail Walker.