At its 90th Anniversary annual meeting on October 16, 2010, the New York-New Jersey Trail Conference announced the following annual awards to volunteers and partners. Trail Conference volunteers, working with managers of public parks and private preserves, have been building and maintaining public trails in the New York-New Jersey region since 1920. The network now includes 1776 miles of trails maintained by 1500 volunteers and supported by 10,000 individual members and 100 member organizations.

The Conference's most prestigious award, given for significant and lasting contributions that protect hiking trails and the land upon which they rest. 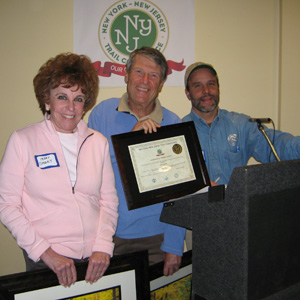 The Trail Conference has been fortunate in having Mary Smart, of New Rochelle, NY, and John Gunzler, of Park Ridge, NJ, as long-time co-chairs of the development committee. Mary and John have pooled their complementary leadership skills to help the Trail Conference aim higher and achieve more in cultivating financial resources to sustain and enhance our trail objectives. They have also been personally generous in providing financial support to new Trail Conference initiatives.

"Mary loves to see people connecting with nature and has a deep appreciation for the work of volunteers," says Trail Conference Executive Director Ed Goodell. "In her nine years on the board, she has been deeply involved with many of our initiatives. John, a 30-year member of the Trail Conference and a former board member, is deeply passionate about protecting open space. John has many avid interests, but he supports our volunteers because he knows they stretch a dollar more than anyone.

"Trail users throughout our region are the ultimate beneficiaries of Mary and John's leadership and generosity. They have made a great team, encouraging each other and most of all, the board and staff to reach higher and achieve more."

Presented to those outside the Trail Conference,(ex:state, federal, local agency partner officials) who have given long and/or significant assistance to the local hiking community. 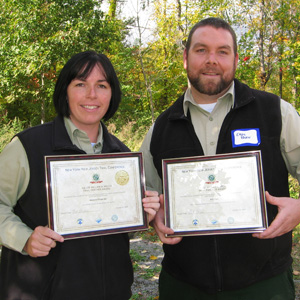 Ringwood State Park Superintendents Rebecca Fitzgerald and Eric Pain are dedicated park staffers who share a commitment to providing high-quality access to parks for hikers and other users, protecting parks from abuse and misuse, and working with volunteers to achieve both goals.

The Trail Conference has worked with these outstanding park employees for many years, in areas in and beyond Ringwood State Park. In addition to Ringwood, their jurisdiction includes Ramapo Mountain State Forest, Farny Highlands, Southern and Northern Wyanokies, Long Pond Ironworks State Park, Monksville State Park along with Shepherd Lake, the Skyland Botanical Gardens, and the Hermitage.

Rebecca and Eric have been generous with their time, walking proposed new trail routes, checking property boundaries, and actively looking into potential environmental "hotspots" in new areas. They have helped both the Central North Jersey and North Jersey trails chairs negotiate state trail regulations, and they willingly work directly with trail supervisors in their region to move projects along.

Rebecca and Eric assist lost hikers, inform the Trail Conference of trail problems, and are helpful sounding boards in trail relocation discussions. In solving trail issues from vandalism of trail signs and blazes to closing trail heads, Eric and Rebecca are reliable and excellent partners.
The Trail Conference could not find a more helpful duo within the New Jersey State Park system than Rebecca and Eric. They are true trail friends, and we thank and salute them.

Recognizes those volunteers who have demonstrated exceptional commitment to projects. 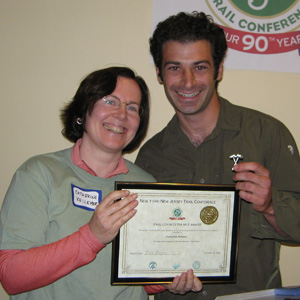 Catherine Kelleher has been a regular volunteer on the Bear Mountain Trails Project since the spring of 2007 when she took her first stone-shaping workshop in the Trail University training program. Since then, Catherine has logged close to 500 hours of service, making her the most active volunteer since the project hit the ground in 2006.

What makes this big number even more impressive is that Catherine is not a resident of New York or New Jersey; she hails from Bethesda, MD, and regularly makes the 4-5 hour journey for the weekend after her normal work week.

Catherine is a regular volunteer with the Potomac Appalachian Trail Club (PATC), and has taken the skills she has learned at Bear Mountain and applied them to the A.T. in her home region, building crib walls and stone staircases and helping with various other stone-shaping work. Still active as a volunteer with the Trail Conference, she has also taken on the responsibility of helping to teach at the very workshops that originally got her involved more than three years ago.

Given to those under age 21 who are making significant contributions of time and energy to trail building or protection. 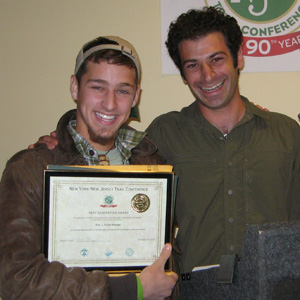 ERIC FUCHS-STENGEL of Mahwah, NJ
Eric began his involvement with the Trail Conference at the age of 17 by becoming a maintainer of the Yellow-Silver Trail in the Ramapo Valley Reservation. In 2008, Eric and a friend, both Mahwah High School students, furthered their commitment to environmental preservation by founding the Mahwah Environmental Volunteers Organization (MEVO), comprising local student volunteers. MEVO has since led numerous work trips including park and school clean-ups, trail restoration outings, public outreach efforts on the topic of climate change, and several work trips at Bear Mountain State Park.

With his wish to get further involved with trail construction, Eric enrolled in Trail University at Bear Mountain in the spring of 2010. Afterwards he signed up for a 300-hour AmeriCorps internship for the Trail Conference's Bear Mountain Trails Project where he helped to construct several stone staircases, crib walls and turnpikes. Eric is now attending Clark University in Worcester, MA, where he is focusing on environmental studies. 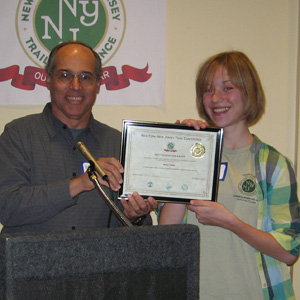 BECKY FIEDLER, of Great Meadows, NJ
Becky started doing trail maintenance at age 13. She accompanied her parents, and was always the first to be ready to go. Her attention to clipping properly, giving clearance without widening the trail, is conveyed to her parents. She also reminds them not to over-blaze. Becky has learned to identify flora along the trail, which she will show and explain to others. Several years ago she organized a large group of her fellow high school students to go to Trenton to speak for and protest the State's plan to close many of our parks. She encourages her friends to hike with her and to enjoy and appreciate our woods. As a result, she is teaching others about the care and protection of our trails and forest lands. 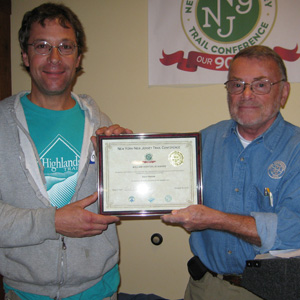 Glenn Oleksak supervises the 150 miles of Highlands Trail between the Delaware and Hudson Rivers. Through his enormous dedication to trail maintenance, management, and stewardship, Glenn embodies the spirit of the Hoeferlin Award, which honors exemplary trail service. Glenn became the Highlands Trail Supervisor in 2005 and since that time he has spent much of his free time, often including vacations, working on the trail to keep it in good shape for an enjoyable hiking experience. He has also hiked the entire trail a few times, and it was during one of these early through-hikes that Glenn began to realize how much attention the trail would demand from him. 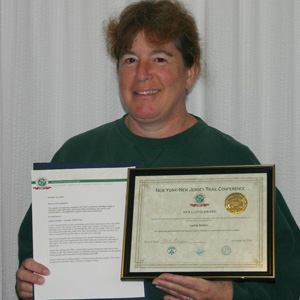 Laurie Rankin is a very active member of the Catskill 3500 Club. When the John Robb lean-to was burned down several years ago, efforts to get it rebuilt were at a dead end. Laurie took on the project and got results. Without her leadership, hard work and cheerleading the club members, this lean-to would not have been rebuilt. She also arranged for DEC Commissioner to send acknowledgement letters to all those who worked on the John Robb project.

Laurie is continuing her work on Catskill lean-to projects by helping with renovations to the Diamond Notch lean-to and leading the construction efforts to build a new outhouse at the John Robb Lean-to. She is working in concert with Trail Conference Lean-to and Trail Supervisors. Laurie's life-long passion for the Catskills inspires her to get these projects done.