Special Earth Day event will be held at 12 noon on Friday, April 22, at Bear Mountain State Park in New York 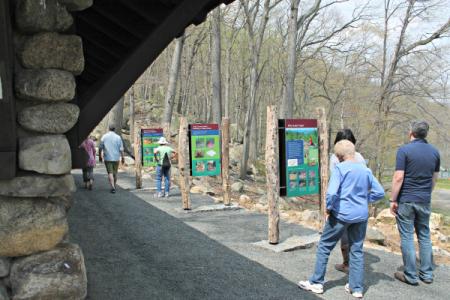 A new outdoor learning and activity area is opening on Earth Day 2016 as a gateway to the Appalachian Trail in Bear Mountain State Park. Trails for People, a project of the New York-New Jersey Trail Conference and partners, will open with a ceremony at 12 noon on Friday, April 22, on the shores of Hessian Lake. It is the first known interactive, on-trail exhibit in the United States dedicated to the art and science of trail building.

Thirty-two educational signs and hands-on displays will inform novice and expert trail users alike about the Appalachian Trail’s origins at Bear Mountain State Park, how trails are built, and how volunteers are the lifeblood of our trail systems. Trail Conference volunteers alongside professional trail builders have rerouted the first 850 feet of the Appalachian Trail’s ascent of Bear Mountain, now known as the Trails for People Demonstration Trail. This Trail segment replaces a steep asphalt driveway and provides a first-hand look at how sustainable hiking trails are constructed. Interpretive signs and activity stations invite visitors to experience trail features such as bog bridges, turnpike, coping stones, crib walls, and step construction.

“The history of trail building in New York State has played a vital role in connecting people with nature,” said Rose Harvey, Commissioner of the New York State Office of Parks, Recreation and Historic Preservation. I applaud our partners at the New York-New Jersey Trail Conference for taking the initiative in developing the Trails for People project. Dedicated to its mission, New York State Parks is continuing to connect its visitors with the great outdoors through these new educational interpretive exhibits.”

Trails for People provides a connection to the Appalachian Trail and wooded backcountry for the 2 million people who visit Bear Mountain State Park each year. Many of the 50,000 visitors who hike over Bear Mountain are new to the outdoors and new to trails, according to Trail Conference Trail Builder and Educator Ama Koenigshof.

“In this area of the park, the habitat had been overused. The Trails for People interpretive exhibit has revitalized the land, making it both beautiful and educational,” Koenigshof said.

Trails for People is part of the Bear Mountain Trails Project, a comprehensive rerouting and reconstruction of this Appalachian Trail segment and other trails on Bear Mountain. Now in its 10th year, the project represents a cooperative agreement among the National Park Service, Appalachian Trail Conservancy, New York State Office of Parks, Recreation and Historic Preservation, Palisades Interstate Park Commission, and the New York-New Jersey Trail Conference.

"These exhibits will provide an outstanding opportunity for visitors to learn about the history of the area, including the Appalachian Trail," said Appalachian National Scenic Trail Superintendent Wendy Janssen. "The exhibits on trail construction are some of the best I've ever seen."

“This is a remarkable demonstration of the trail construction techniques seen in the reconstruction of the Appalachian National Scenic Trail across Bear Mountain,” said Karen Lutz, Mid-Atlantic Regional Director for the Appalachian Trail Conservancy. “The project, now in its 10th year, has been a collaborative effort between private and public partners and will provide the highest quality A.T. experience to Bear Mountain visitors. The Appalachian Trail Conservancy is very pleased to join the New York-New Jersey Trail Conference and its partners in celebrating this wonderful project.”