When Nature delivers stress and distress

Prompted by calls to our office from hikers distressed to see the remains of dead deer along some trails and requests that the Trail Conference please remove them (we let nature take of itself in these instances), we asked  big game biologist Dick Henry to write about the impact of winter on deer survival and the cycle of life. His article follows. 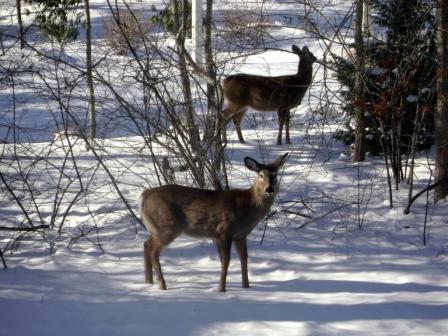 In New York and New Jersey, the most critical months for deer survival are late winter, especially when weather conditions have been harsh for an extended period of time.

Deer rely heavily on their fat reserves to survive in northern climates. They are ruminants similar to cows and have a four-chambered stomach that progressively breaks down food as it passes from one chamber to the next.  During the warmer months a deer’s diet consists of green, succulent vegetation and that allows them to build up and store fat  in their bodies.

During winter, however, that food source is nonexistent, and deer must rely on browse from trees and shrubs. Their winter diet has considerably less nutrition, and accordingly deer will then be forced to rely on stored fat to survive. The quality of winter habitat varies considerably, and unfortunately much of our winter habitat in southeastern New York and northern New Jersey  is mature forest and/or over-browsed landscape.

Deer store fat in three locations in their body. The subcutaneous fat, found under the skin is utilized first, followed by the mesentery fat found within the gut cavity. As a last resource, fat stored in the bone marrow is used for survival.

How quickly are fat reserves burned during the winter?  It depends on a number of factors related to mobility, cooling and the overall severity of the winter conditions.  Snow depth is most critical, especially if deer are forced to wallow through deep snow.  Long-lasting deep snows can deplete fat reserves at a much faster rate, especially when deer drag their bellies through the snow for extended periods of time. Low temperatures and wind will also have a draining effect on fat reserves.

Typically young-of-the-year fawns are the first to perish from winter-kill, simply because they never achieve the same level of fat depositions that adult deer have. The old, injured, and infirm are typically next to succumb.  In especially severe winters, prime age deer are the last age group to die from winter starvation.

While winter mortality can reduce deer numbers, it is also of considerable benefit to other species. Predators such as coyotes, foxes, fishers, and bobcats readily consume  winter kill deer. Scavengers such raccoons, skunks, and opossums will partake of the leftovers and complete a perfect food chain. Little, if any evidence of deer winter mortalities remain after late spring when the cycle of life begins anew.

In spite of the other forms of non-hunting deer mortality, winter kill is the most potentially significant cause of non-hunting deer losses. After all of the losses from predation, sickness, vehicle collisions and hunting season, winter mortality can reduce a deer population to its lowest level at any time throughout the year.

Mother Nature, as always, creates “the low hole in the bucket.”

Dick Henry is a biologist with the Hudson Valley Branch of Quality Deer Management Association, www.hvqdma.com. For 40 years he was a big game biologist with New York State Dept. of Environmental Conservation.