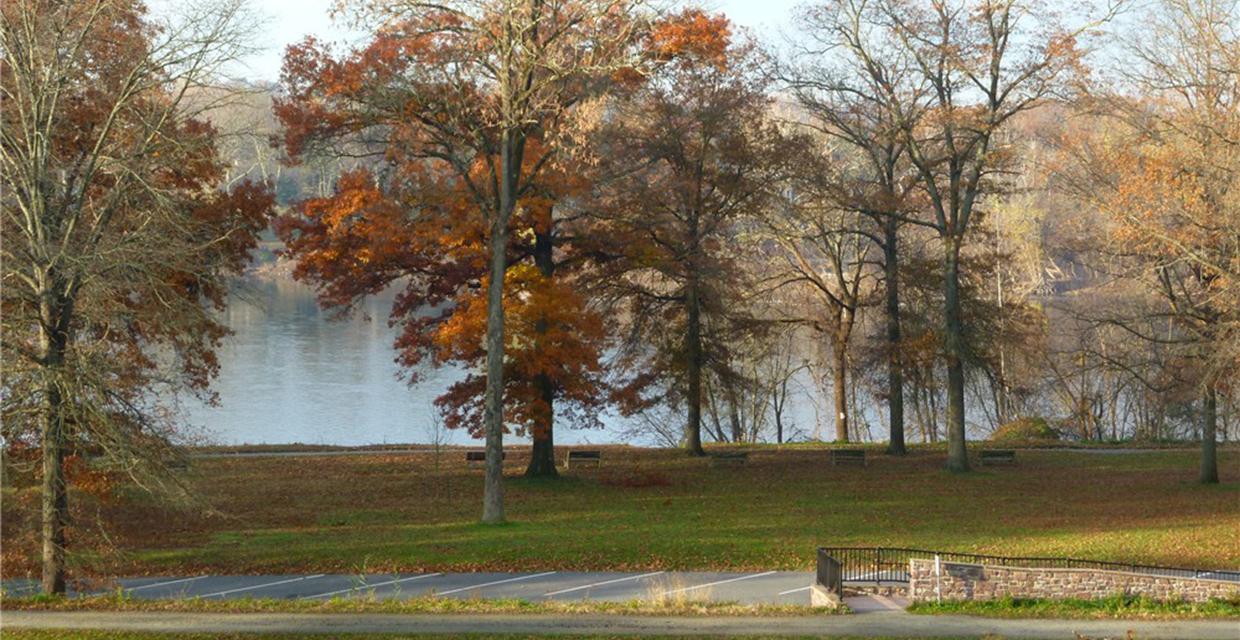 This is the place out of the history books where the Continental Army crossed the Delaware River on Christmas night 1776.

Established in 1912, Washington Crossing State Park is the site where the Continental Army landed after crossing the Delaware River on Christmas night 1776.  Within the 3,500-acre park are a 140-acre natural area containing fields in various stages of secondary succession and a mixed hardwood forest. In addition, the park includes a visitor center museum, the Johnson Ferry House, an observatory [open Friday nights seasonally] and a nature center, plus facilities for picnicking.

Originally preserved for its historical significance, the park is also well known for its trails and wildlife habitat. A wide variety of migrating birds use the stream and ravine as a resting place and for nesting. Many bird species winter in the park, creating a perfect location for bird observation year round.

With 15 miles of hiking trails there are plenty of places to walk in the park  Use the Web Map link on this site for a trail map.

Click for detailed descriptions of hikes in the park.

This is the place out of the history books where the Continental Army crossed the Delaware River on Christmas night 1776.

Established in 1912, Washington Crossing State Park is the site where the Continental Army landed after crossing the Delaware River on Christmas night 1776.  Within the 3,500-acre park are a 140-acre natural area containing fields in various stages of secondary succession and a mixed hardwood forest. In addition, the park includes a visitor center museum, the Johnson Ferry House, an...

Some times and places; check with park

For those who wish a little background about the depiction of Washington's crossing the Delaware, here's an article from the New York Times, December 25, 2011, about a famous painting and an updated interpretation:

"There are few images as enduring in American history as the one of General George Washington standing tall, next to the Stars and Stripes, in a rowboat gliding past mini-icebergs as he leads his troops across the Delaware River on Christmas Day 1776 to start a surprise attack on Hessian forces during the Battle of Trenton.

In his 1851 portrait, “Washington Crossing the Delaware,” among the best-known of American paintings, the artist, Emanuel Leutze, did not shy away from imbuing the scene with a dose of glory, inspiration and heroism.

He also did not let the facts get in the way of his masterpiece — the original hangs at the Metropolitan Museum of Art.

The only thing wrong with this historical image is the history part, said Mort Künstler, as he recently put the finishing touches on his own version of Washington’s crossing. As it rested on an easel in Mr. Künstler’s studio on Long Island, the painting looked nothing like the Leutze version.

“I’m not knocking the original: it’s got great impact and Leutze did a heck of a job,” Mr. Künstler said. “I give Leutze higher marks for a good painting than for historical accuracy, but why can’t you have both?”"

The newstory continues by clicking here.

DEP PRESERVES SCENIC ACRES ALONG THE

“With its breathtaking beauty and spectacular views of the , this property is a real treasure,” Commissioner Mauriello said. “It’s hard to imagine that this land was at risk of being developed for new housing. Through the commitment and leadership of Governor Jon S. Corzine, we are protecting ’s priceless natural resources.”

The DEP’s Green Acres program purchased the Goat Hill Overlook property for $4.5 million from Constructural Dynamics Inc. of The company acquired Goat Hill Overlook from the Boy Scouts in 1983 and originally intended to use the land for mining operations. That plan was later changed in favor of constructing a residential development complex at the site.

In addition to views of the , the property features a prominent rock, known as Washington Rock. According to local legend, General George Washington used the views from Goat Hill Overlook to assess battle conditions during the Revolutionary War. The site also offers miles of hiking trails and contains a variety of wildlife and plant species.

Since its inception in 1961, the program has protected more than 640,000 acres of open space, in addition to funding the development of hundreds of parks throughout . 's statewide system of preserved open space and farmland now totals more than 1.4 million acres.