This hike follows a series of woods roads through an important center of the iron industry in the 1800s. Some of these woods roads are unmarked, and although they can easily be followed, those who are not confident of their route-finding ability might wish to choose another hike. The route of the hike traverses both Long Pond Ironworks State Park and Tranquility Ridge County Park.

After crossing a stream on a bridge, the blue-on-white-blazed Sterling Ridge Trail and the teal-diamond-blazed Highlands Trail join from the left. Ahead, you’ll come to the ruins of the company store and Hewitt Post Office. Here, you should bear right, following the blue-on-white and teal blazes.

A short distance beyond, the trail turns right to cross the Wanaque River on a footbridge. Before crossing the bridge, continue ahead into an open area, with the remains of the historic Long Pond Ironworks furnaces around its perimeter. Built between 1766 and 1865, these furnaces were used to convert iron ore from nearby mines into bars of iron. Behind the furnaces, the remains of waterwheels which harnessed the Wanaque River to power the furnaces’ air-blast machinery are visible within protective coverings.

After spending some time viewing the remains of the ironworks, return to the trail and turn left, crossing the Wanaque River on a wood-truss footbridge. The bridge was constructed in the fall of 2016, through the efforts of the New York-New Jersey Trail Conference, to replace a bridge that was washed away by Hurricane Irene in 2011. In addition to the Sterling Ridge and Highlands Trails, you are now following the yellow-blazed Hasenclever Iron Trail, which begins on the west side of the footbridge.

In 300 feet, follow the yellow blazes as the Hasenclever Iron Trail turns right, leaving the Sterling Ridge/Highlands Trail. The Hasenclever Iron Trail follows the route of an old road that was built to connect the Ringwood mines with the Long Pond Ironworks. This road was abandoned many years ago, and today, some sections are barely recognizable, while others are badly eroded. While the marked trail generally follows the road, there are places where it detours slightly to avoid wet or eroded sections.

Just before reaching the reservoir, the trail turns sharply left and begins to parallel the reservoir. A short distance ahead, you’ll reach Stop 2 of the trail, where the stone ruins of a building used to process or store limestone are visible on the left. Next is Stop 3, near where the trail departs from the original route of the Ringwood-Long Pond road (now submerged under the reservoir).

Soon, the trail turns left, leaving the woods road it has been following, and enters the woods on a footpath to skirt a private home. It eventually curves to the right and descends to reach a junction with the dirt Beech Farm Road (this junction is Stop 4 on the trail).

Turn right onto Beech Farm Road, following the yellow blazes, and cross a stream on a wide concrete bridge with a guardrail. About 500 feet beyond the bridge, the trail turns left, leaving the road, and reaches Stop 5, where a 200-year-old tree on the right marks the site of an old homestead (note the iron cable on the left side of the trail). The trail now ascends gradually along a woods road, with a detour around an eroded section.

In another third of a mile, you’ll reach Stop 6. Here, the yellow-blazed Hasenclever Iron Trail bears right, but you should turn left onto an unmarked woods road which heads downhill towards a stream. The stream crossing can be tricky in times of high water, and you might want to go a short distance upstream and cross just below a cascade.

When you reach the crest of the rise, you’ll notice a mine pit to the right of the trail. This is one of the openings of the Patterson Mine, which was opened around 1870 and last worked in 1903. To the left of the trail are two water-filled pits, also part of the mine complex. Adjacent to each opening is a pile of tailings – the waste rock excavated during the mining process.

After spending some time exploring this interesting area (use caution when approaching the open mine pits), return to the woods road and continue ahead, now proceeding downhill. Soon, the joint Sterling Ridge/Highlands Trail (blue-on-white and teal diamond blazes) joins from the right.

Continue along the marked trail, which heads downhill, paralleling a stream on the right. At the next junction, marked by a triple yellow blaze, the Jennings Hollow Trail begins on the right, but you should continue ahead on the joint Sterling Ridge/Highlands Trail, passing through a hemlock grove.  In three-quarters of a mile, you’ll reach the footbridge over the Wanaque River. Cross the bridge, then turn left and retrace your steps back to the parking area where the hike began.

Loop Hike to Patterson Mine 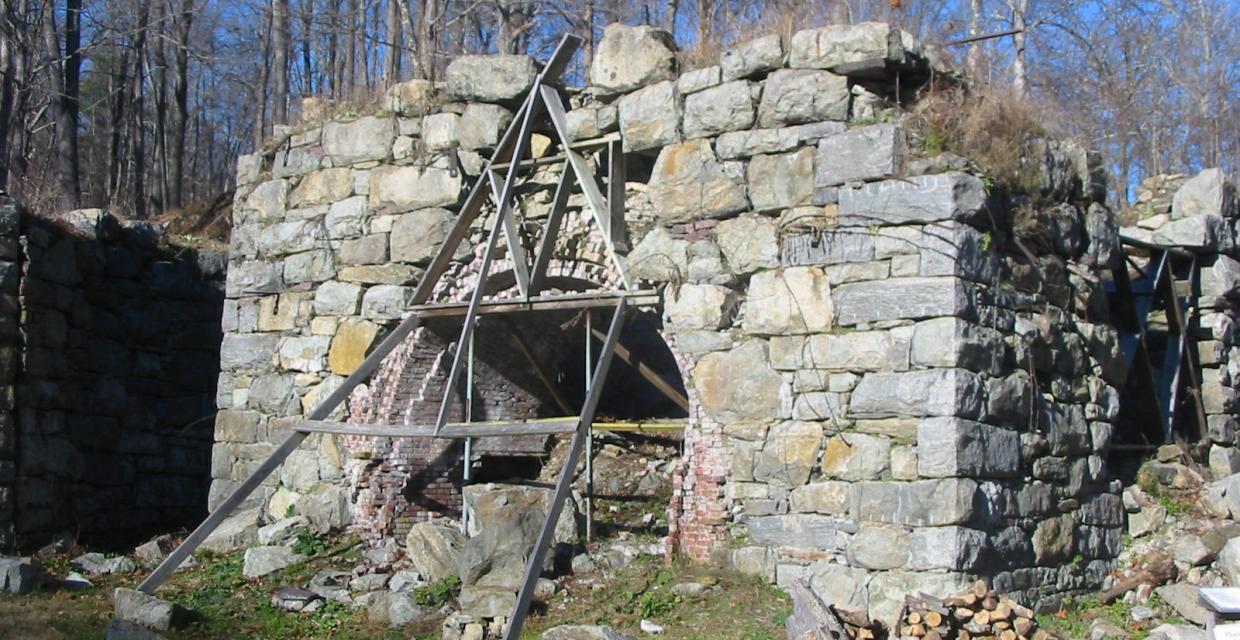 This loop hike passes the ruins of the Long Pond Ironworks and follows old woods roads to the Patterson Mine.

This hike follows a series of woods roads through an important center of the iron industry in the 1800s. Some of these woods roads are unmarked, and although they can easily be followed, those who are not confident of their route-finding ability might wish to choose another hike. The route of the hike traverses both Long Pond Ironworks State Park and Tranquility Ridge County Park.

Take I-287 to Exit 57 and continue on Skyline Drive to its western end at Greenwood Lake Turnpike (County Route 511) in Ringwood. Turn right and proceed for 4.8 miles to the parking area for the Long Pond Ironworks Historic District (the parking area is on the right side of the road, immediately after crossing over the Monksville Reservoir).

rate experience
September 20, 2021
4
Nice Moderate Loop Full of History
We enjoyed this hike on an early day in May, as the leaves were still coming in. This was a Moderate hike toward the Easy side, with most walking on soft wide trails and woods roads. Very little up and down, though the one trickier descent was in the last stretch where ATV's have created a wet gully to be avoided. We enjoyed the historic sites in the first half of the hike, learning about the iron industry, the furnaces, and the Hewitts. I also found the waterwheels to be amazing examples of 19th century technology. Our one tough challenge was the stream crossing about halfway through - the water was high enough to warrant rock-hopping across the flow, but for a person lacking confident balance or a long stride, one might be force to turn back. This seems like a location where a simple log bridge or a few strategically placed stones would help. We found the directions to be very accurate - no problems knowing on which unmarked woods road on should turn. It does seem like blazes would very much help this loop, however. We parked in front of the historic buildings without hesitation, knowing we were there to enjoy the 'District' and its lands. Probably helps if you have an NYNJTC sticker in your window, too.
glennagrube
September 27, 2018
4
Parking for hike at Long Pond Ironworks should be okay

I consulted a long-time volunteer who maintains many of the trails in the area, and he replied as follows:  "I think that a day tripper hiking in the general area surely qualifies as being within the historic district, which is on both sides of the road. I see no problem with that and park there myself, no hassle.  A commuter parked there all day every day would be a more likely target."  In other words, the restriction on parking is intended to deter people who are not visiting the immediate area from parking at Long Pond Ironworks.  Those who follow the route of this hike are considered to be visitors to the historic district, and their cars will not be towed.

Daniel Chazin
September 27, 2018
4
Where should hikers park?
At the parking lot for the Long Pond Ironworks Historic District, there are signs indicating parking is for the Historic District only and that others would be towed. About 2/10 mile up the road, at East Shore Road, there's a little "park" where perhaps you can park. On the opposite side of the road were lots of parking barriers. I ended going another 2/10 mile up the road and parked at a gravel pull-off on the south side of the road. The Highlands Trail crosses Greenwood Lake Turnpike at East Shore Road, so you're only walking along the road a short distance. You can take the Highlands Trail back to the Historic District and pick up the route there.
jwrushman
More Reviews
Log in or register to post comments