From the parking area, walk back along the entrance road until you reach a gravel road on the right blocked off with a gate. Turn right and follow this road, marked with the white blazes of the Anthony Wayne Trail (as well as with blue-on-white Bike Trail markers). Bear right at the next fork and continue uphill, proceeding ahead across a four-way intersection.

When you reach a T-intersection, turn left. Then, in 25 feet, you’ll notice three red-“F”-on-white blazes on a tree to the right, which mark the start of the Fawn Trail. Turn right onto the Fawn Trail, which climbs, using switchbacks and rock steps for part of the way, to reach a junction with the blue-blazed Timp-Torne Trail.

Turn left onto the Timp-Torne Trail, which climbs to a rock ledge, with Bear Mountain and the Perkins Memorial Tower on its summit visible through the trees on the right. The trail now descends, with more views of Bear Mountain on the way down. You’ll pass one end of the white-blazed Anthony Wayne Trail on the left, but you should continue ahead, following the blue-blazed Timp-Torne Trail.

At the base of the descent, the 1777W Trail (red 1777W on white) comes in from the right and joins the Timp-Torne Trail. Turn left, following the joint 1777W/Timp-Torne Trail, which crosses a highway ramp, then turns left to cross the Palisades Interstate Parkway on a bridge that carries the Seven Lakes Drive over the Parkway.

At the west side of the bridge, turn right and head north on paved Queensboro Road, which crosses over a stream and passes 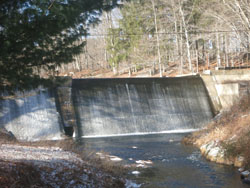 the dam of Queensboro Lake and a water treatment facility on the left. Follow the blue and 1777W blazes as they continue ahead on a gravel road, but a short distance beyond, they turn right and re-enter the woods on a footpath to bypass a park pistol range.

The joint trails descend slightly to reach the gravel Queensboro Road. Here, the Timp-Torne and 1777W Trails turn right, but you should cross the road and continue straight ahead, now following the Popolopen Gorge (red square on white) and 1779 (blue 1779 on white) trails. The Popolopen Gorge/1779 Trails cross a stream on rocks, pass an historic marker that relates the story of the battle of July 15, 1779, and continue ahead on a grassy woods road.

You’ll soon reach the northern tip of Queensboro Lake. The trail (now a footpath) curves inland but soon returns to the lake shore once more, then again heads inland. After crossing another stream on rocks and climbing a little, you’ll come to a fork in the trail. Here, the 1779 Trail goes off to the left, but you should bear right, following the red-square-on-white blazes of the Popolopen Gorge Trail.

The trail now climbs rather steeply, then descends to Summer Hill Road (a dirt road built by the Civilian Conservation Corps in 1933), with beautiful cascades in the stream just beyond. It turns left on the road to cross hte stream, then immediately turns right and climbs past the dam of Turkey Hill Lake to emerge onto the lake shore. The trail follows the shore of the lake for about half a mile, with panoramic views over the lake and Long Mountain (in the background). About halfway along the lake, there are views of Bear Mountain (with the Perkins Memorial Tower on its summit) to the east.

Near the southwest corner of the lake, you’ll reach an intersection with the white-blazed Anthony Wayne Trail, which begins on the left. Turn left and follow this trail, which climbs to the crest of a rise on a grassy woods road and then descends. With park maintenance buildings visible ahead, the trail turns right, leaving the road. In 200 feet, it turns right onto another woods road (the original route of what is now Route 6); it then turns left again, crosses a brook, and continues ahead to Route 6.

The trail bears left and follows the paved road for 50 feet, then turns right, crosses the road, and reenters the woods. In a third of a mile, after a relatively level stretch, it passes an abandoned stone comfort station and reaches the Seven Lakes Drive. The trail crosses the road diagonally to the left, continues along the road for 225 feet (crossing over Queensboro Brook), then turns right and reenters the woods. It climbs the shoulder of a hill (crossing the 1779 Trail on the way), then descends to a ramp of Exit 17 of the Parkway. It turns left, crosses the Parkway on an overpass, and continues along the road to the parking area where the hike began.

This loop hike follows two historic trails and runs along the shore of Queensboro Lake and Turkey Hill Lake.

From the parking area, walk back along the entrance road until you reach a gravel road on the right blocked off with a gate....

rate experience
August 01, 2017
3
Anthony Wayne Trail very overgrown
I did a variation of this hike on July 30, 2017. The section of the Anthony Wayne Trail between Route 6 (Long Mountain Parkway) and Seven Lakes Drive is very overgrown. In some sections, the weeds were waist high, and if not for the blazes on the trees, it would have been impossible to follow the trail. As the Anthony Wayne Trail nears Seven Lakes Drive, the weeds were over my head and I am 6 feet tall. Other than that, a nice hike.
CeeGee
June 26, 2016
0
Great up to Route 9 then becomes dangerous
On 6/26/2016, I attempted this loop hike with my wife. It was fun and great...until Route 6. As user 'stretchfab' had mentioned in the previous comment, near the end of the hike at Route 6, we could not find the continuation of white-blazed AW Trail. It was very dangerous to cross Route 6 with cars traveling at 40+ MPH in both directions. We tried to find the opportunity to cross but it was near impossible (at around 1200 hours). We had to walk back to the AW Rec Parking Area via Route 6, passed the roundabout (dangerous but it had to be done for us to go home), walked alongside the Palisades Interstate Pkwy and finally to Exit 17 AW Recreation Area where we parked our car. Just a warning.
avid_hiker
November 10, 2013
0
An enjoyable hike.
While not too strenuous at all, this is a nice little hike that anyone should be able to do without exerting too much energy. Despite the trail being covered in leaves for most of the way, the trail was not too rugged or difficult anywhere. The lakes were really nice this time of year. The trail is marked very well and as usual the directions were accurate. I liked the Revolutionary War Signs and the brief history they gave. Would gladly do this one again and maybe extend it a little next time.
Sully
More Reviews
Log in or register to post comments