After a quarter of a mile, you’ll notice a large cairn and a triple-orange blaze to the right. This marks the start of the Orange Trail. Turn right and follow the Orange Trail, which continues on a relatively level path for another quarter of a mile, then bears right and descends to the shore of Taylortown Reservoir. It continues along the shore of this scenic reservoir, soon reaching a rock ledge overlooking the reservoir. You’ll want to stop here to enjoy the view. After briefly detouring inland and passing cliffs to the left, the trail returns to the shore of the reservoir. At a rock ledge overlooking an island in the reservoir, the trail turns left and begins to climb Pyramid Mountain. Soon, you’ll notice a huge tree, with four trunks, just to the left of the trail. Here, the climb steepens for a short distance, but the grade soon moderates.

At the top of the climb, the Orange Trail reaches a viewpoint to the east from a rock ledge, marked by a lone cedar tree. The trail now bears left and, 100 feet beyond, reaches a junction (marked by a cairn) where the Green Trail begins on the right. Turn left to continue on the Orange Trail, which runs along the ridge of Pyramid Mountain, passing through dense stands of mountain laurel. At the next junction, the Orange Trail turns right, but you should continue straight ahead, now following the Blue Dot Trail (black dot on blue)

In about half a mile, you’ll reach Tripod Rock – a huge boulder, perched on three smaller stones. Geologists explain that this boulder was deposited here by glacial action, although some believe that it may be a Native American calendar site. This unusual feature helped galvanize public support to preserve the mountain when it was threatened by development. This is a good place to take a break.

When you’re ready to continue, continue heading south along the ridge on the Blue Dot Trail. Soon, you’ll notice a purple-blazed side trail on the right. Follow this trail, which leads in a short distance to Lucy's Overlook, named for Lucy Meyer, who led the crusade to save the area from development. There are limited views to the south and west over Stony Brook Mountain from rock outcrops. Continue ahead on the purple-blazed trail until it ends at the Blue Dot Trail, then turn right onto the Blue Dot Trail.

Directly ahead is Bear Rock. This massive glacial erratic, which can be said to resemble a giant bear, has been a local landmark for centuries. It was probably used as a shelter by Native Americans, and today it marks the boundary between Kinnelon Borough and Montville Township. Here, the Yellow Dot Trail ends. You should turn left and follow the Orange Trail along an old woods road, bordered with a rock wall on the right. Soon, the Pink Dot Trail (black dot on pink) begins on the right, but you should continue ahead on the Orange Trail.

The Orange Trail crosses Bear House Brook on a wooden bridge and soon begins to parallel power lines on the right. In about half a mile the Orange Trail ends at a large cairn. Bear right and continue ahead on the Blue Trail, which climbs a little, then descends gradually, crossing under the power lines. 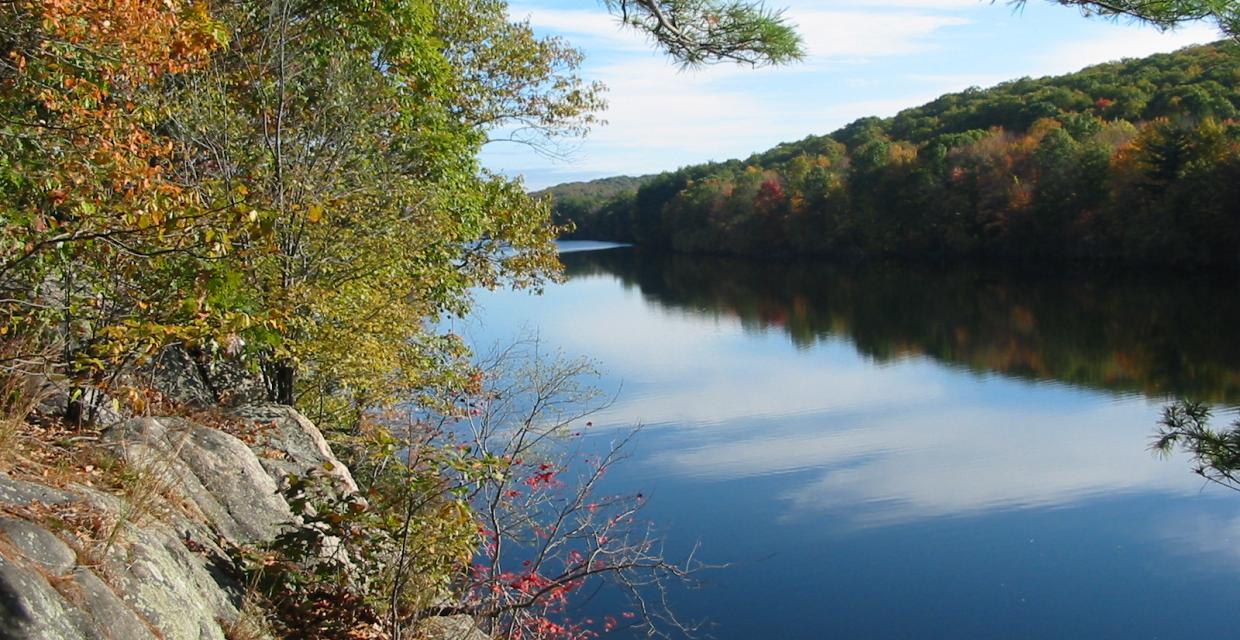 Take I-287 to Exit 44 (Main Street, Boonton) and bear right onto Lathrop Avenue. Turn right at the stop sign onto Main Street (County Route 511), proceed along Main Street for 0.3 mile, then turn right onto Boonton Avenue. Continue on Boonton Avenue, still designated County Route 511, for 3.3 miles to the parking area for the Pyramid Mountain Visitors Center, on the left side of the road (the Visitors Center is opposite Mars Park, about 0.7 mile north of the intersection of Route 511 and Taylortown Road).

rate experience
September 02, 2014
0
this hike has everything
We did this hike 8/31/14 sunday. This was a wonderful hike, and the direction was perfect and trails was well marked which made the hike even more enjoyable. the view of the lake at the start of the hike was beautiful, and the tri-pod rock was very interesting, and the bear rock was huge, took a lot of pictures. I would recomend to bring bug repelant, at the begining it wasnt bad but at the end of the hike going through some swampy area there was lots of bugs. This hike just became one of my favorite hikes I will be back.
heabhong
November 08, 2010
0
Some great sights, but beware of large crowds on weekends
This is certainly a very popular place for a walk, because even on a winter day, I've seen the parking lot full of cars on a weekend afternoon with additional cars parked along Boonton Ave. If you're looking for a quieter hike, visit Pyramid Mountain early in the morning or during the week. Turkey Mountain is right across the street from this park and while it doesn't have interesting rock formations, you will usually find less people treading on its trails.
jjotz
Log in or register to post comments