At the southern end of the parking area, you’ll notice a triple yellow blaze, which marks the start of the Yellow Trail. Follow this trail south, parallel to Boonton Avenue, for a short distance, then turn left and cross the road at a designated crosswalk. The trail continues along a level, graveled-surfaced road, passing Mars Corporate Park on the left. Soon, you'll pass the start of the Red Dot Trail and then the White Trail, both on the right (the junction with the White Trail is marked by a cairn), but continue ahead on the Yellow Trail.

In another third a mile, the Orange Dot Trail crosses. Continue to follow the Yellow Trail, which now becomes rougher and narrower and begins to descend. In about half a mile, the Yellow Trail passes the other end of the White Trail on the right (also marked by a cairn). Soon, you’ll reach the base of the descent, where the Yellow Trail turns left onto a woods road. After crossing puncheons and rocks over a wet area and a footbridge over a stream, the trail begins a steady climb.

In a short distance, the Yellow Trail turns right, leaving the woods road, and continues on a footpath. The climb now steepens. Soon, the trail crosses a ravine and turns left to closely parallel it. This ravine was created by a quarry that operated here in the mid-to-late nineteenth century. The quarried rock was transported to the nearby Lake Valhalla (where it was crushed) via the Horse Shoe Trail, which is followed in part by today’s Yellow Trail. The crushed rock was then taken to Boonton, where it was used to remove impurities from the iron ore that was smelted there. Although commonly referred to as “limestone,” the rock found in this area is more correctly known as dolomitic marble.

At the end of the ravine, the Yellow Trail turns left and continues to climb gradually. Soon, it reaches a power line clearing. Here, the Green Dot Trail begins on the left, but you should turn right, continuing to follow the Yellow Trail, and cross under the power lines. On the other side of the power lines, the trail turns right and crosses a stream on rocks. It continues along the side of a hill on a rocky footpath, then bears right and descends. At the base of the descent, the Purple Dot Trail begins on the right.

About 1.8 miles from the start of the hike, you’ll come to a T-intersection. Here, the Red Trail begins on the right, but you should turn left to continue on the Yellow Trail. Just ahead, there is an attractive waterfall in wet seasons (the waterfall is dry during periods of sparse precipitation).

Proceed north on the Yellow Trail, which climbs briefly, descends to cross a small stream, then resumes a steady ascent. After reaching the crest of the rise, it descends gently on an old woods road.

Soon, you’ll reach another junction, where the other end of the Red Trail is straight ahead. Turn left to continue on the Yellow Trail, which climbs Turkey Mountain on an old woods road, passing through gaps in several stone walls on the way.

On the summit ridge of Turkey Mountain, a large rock outcrop to the left of the trail offers east-facing views when there are no leaves on the trees, but even when the views are obstructed by foliage, the rock outcrop provides a nice place to take a break (be careful not to touch the poison ivy that grows along a portion of the outcrop!).

When you’re ready to continue, turn right at a cairn and continue to follow the Yellow Trail along the flat summit ridge of the mountain. Soon, you’ll reach the true summit (892 feet). Here, the trail turns left and begins to descend.

Continue ahead on the Green Dot Trail, and in about 500 feet you'll come to the ruins of a stone cabin. The cabin was never occupied, as the owner abandoned construction when the power lines came through.

Turn right onto the Yellow Trail, retracing your steps on a level, gravel-surfaced woods road for half a mile back to Boonton Avenue. Cross the road and continue to the Visitors Center and the parking area where the hike began. 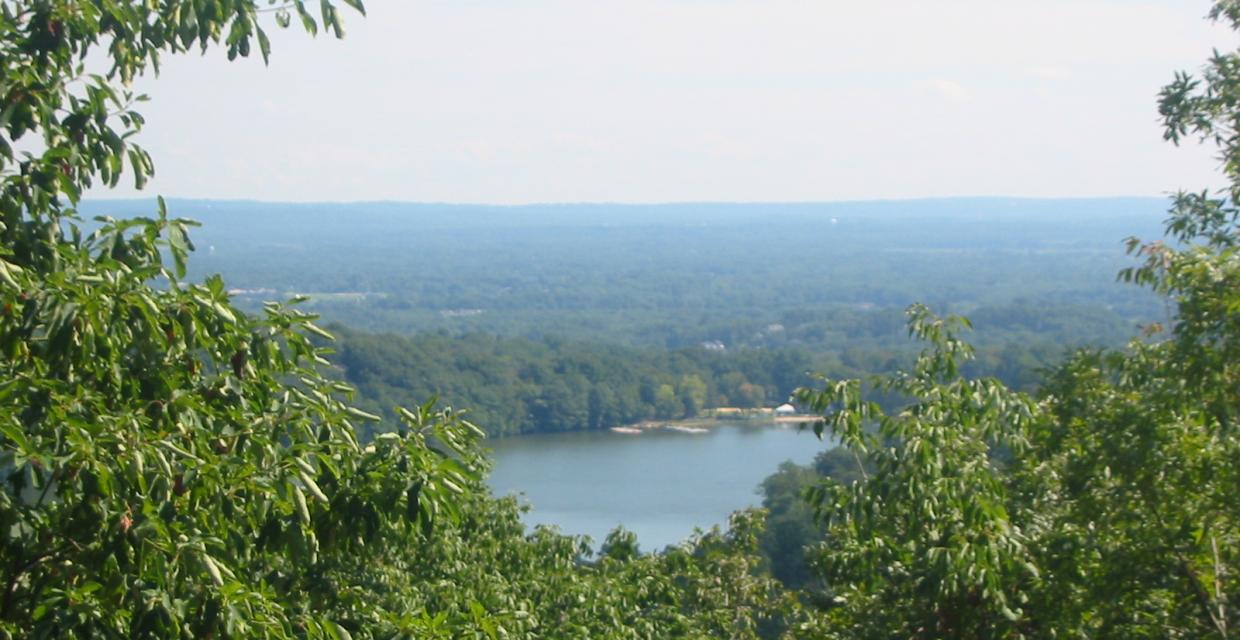 At the southern end of the parking area, you’ll notice a triple yellow blaze, which marks the start of the Yellow Trail. Follow this...

Take I-287 South to Exit 47 (Montville, Lincoln Park), and turn left at the bottom of the ramp onto Main Road (U.S. Route 202). Continue on Main Road as the road makes two sharp turns – first to the left, then to the right. In 0.6 mile, just before reaching a fire station, turn right onto Taylortown Road. Continue on Taylortown Road for 1.8 miles until it ends at Boonton Avenue (County Route 511). Turn right onto Boonton Avenue and continue for 0.7 mile to the entrance to the Pyramid Mountain Natural Historic Area, on the left side of the road, opposite the Mars Park Corporate Center.

rate experience
August 21, 2014
0
Hike Description Needs Update (White Trailhead)
<p>Did this hike a couple of&nbsp;days ago.</p> <p>The start of the&nbsp;white trail was moved significantly on the yellow trail. It now starts well&nbsp;before you cross the blue blazed Butler-Montville trail. New white trailhead is on the right and is&nbsp;well marked&nbsp;with large rock cairn and triple white&nbsp;blazes. This reroute is quite nice, and at one point passes a wooden sign for blue trail, allowing for loop hike back to yellow. Stay on white when you see this sign if you wish to see the Valhalla Overlook (better when leaves are down).</p> <p>My other concern is that it is now nearly Fall 2014 and some trails in this park are still closed despite PSEG having completed their massive powerlines&nbsp;quite awhile&nbsp;ago. When will the rest of the trails be opened?</p> <p>Thanks.</p>
Willy
March 05, 2012
0
Hike description has been updated
<P>Thanks for bringing the reroute to our attention.&nbsp; I have updated the hike description.</P>
Daniel Chazin
March 05, 2012
0
Yellow Trail Description Needs Updating
<P>I hiked the yellow trail described in this hike today and it has had a significant reroute. This hike description needs to be updated. The reroute is quite nice- kudos to those TC volunteers who designed it and worked to make it happen!</P>
Willy
More Reviews
Log in or register to post comments