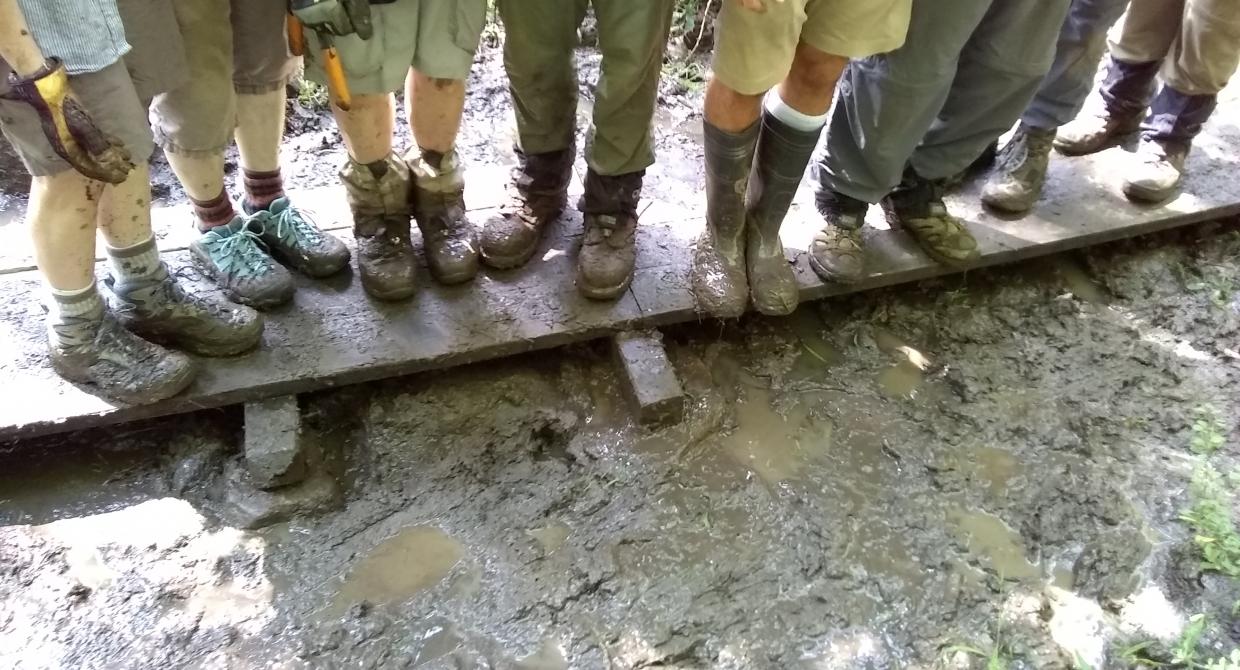 Freezing or frying, drought or deluge, right or left, stay or go—everything in our lives today seems to involve extremes.

Let’s talk trails. For well over a year, mine have been either underwater or under downed trees. And it’s not just seasonal or storm-related. It has progressed past sporadic and become so chronic that we as trail builders have begun planning appropriate response protocols.

Last year was a trail nightmare—a wild and crazy March was followed by a devastating May “thunderstorm” that destroyed many trail sections, including along the Appalachian Trail, which only preceded frequent rain events that resulted in flooded trails, stream, and pond overflow, and increased erosion on slopes.

Last year, East Hudson sawyers and their swampers spent over 300 hours responding to those storms in the Castle Rock area alone. I don’t know how many hours were spent clearing similar catastrophic damage on the A.T. and other trails, but I suspect it equals or exceeds my total.

But the extreme weather also resulted in increased work on previously planned projects. My crew, the Trail Tramps, spent over 380 hours at Hudson Highlands in 2018 working on a major trail overhaul. Last spring, we completed a reroute of the red-blazed Annsville Creek Trail in Hudson Highlands Gateway Park that had been in the works for several years. And it continued to be flooded. So we built stairs, raised tread, installed turnpikes, and dug ditches—and now, over a year later, the trail is walkable even after heavy rainfall. We rushed a planned reroute because a section of the old trail was continuously underwater. We rerouted a trail because of excessive storm damage. I factored 2018 conditions into the planning and construction of a reroute and two new trails for this season. 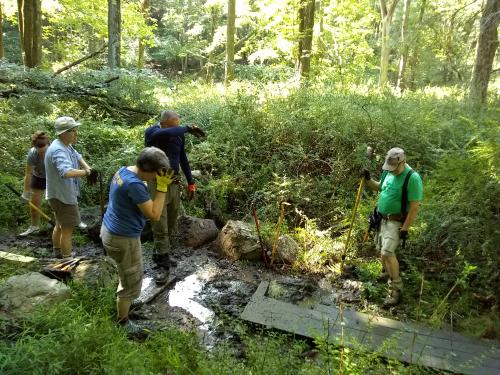 And as for that red trail, it has required significant additional “waterproofing.” These pictures show how we have built turnpikes, dug ditches, paved sections, rerouted onto berms and laid 40 feet of puncheon, with another 120 feet pending. We even built two stone staircases. Note that this trail is less than 1 mile long.

We are almost halfway through 2019. So far (knock on wood) we have been spared extreme storms, but have definitely had a lot of rain. Weather continues to be a major factor in the trail work— both emergency and routine— done by the Tramps. That likely won’t change. It affects trail repair and clearance, results in upgrades to trail design to include puncheon and tread structures, and significantly influences trail planning and construction. It seems likely that it is not a question of whether, but when, the next big storm will hit, but we Trail Tramps hope to be prepared to deal with whatever a ticked off Mother Nature throws our way.

How about you? How has weather affected your trail experience—as a hiker, maintainer, or trail supervisor? Let us know at [email protected].