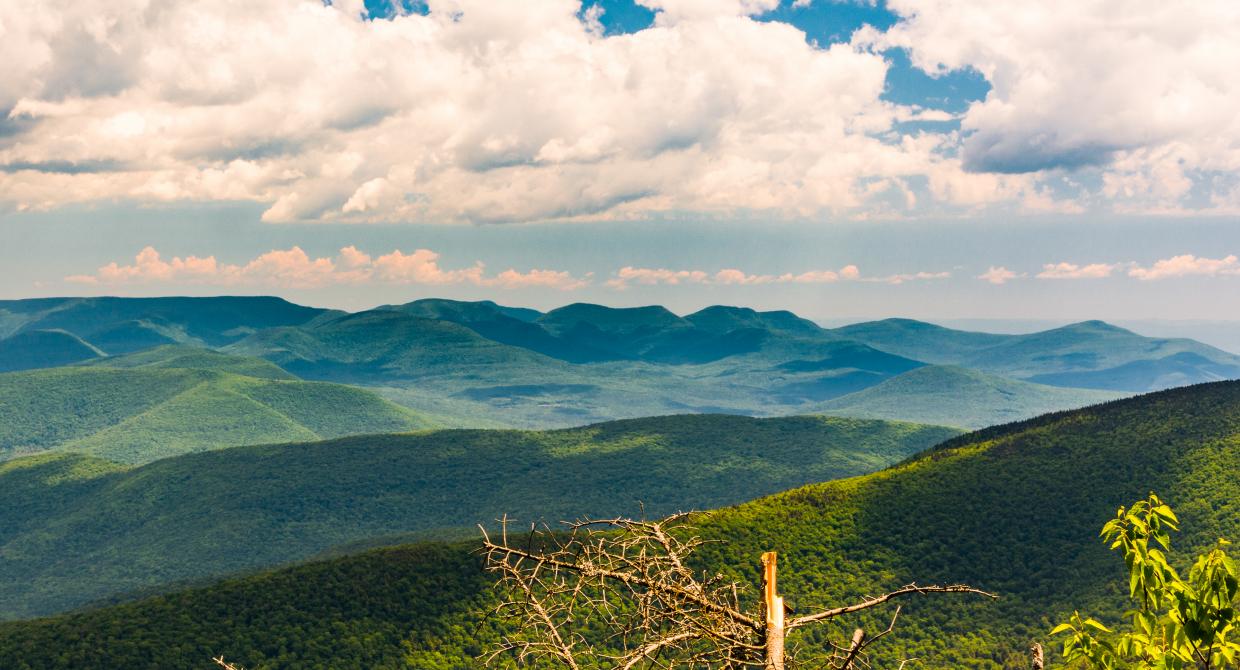 Will Fortin and Dustin Smith set out on their unsupported trek of the Long Path at the official northern terminus of the trail in John Boyd Thacher on June 1. On June 9, Will and Dustin crossed the George Washington Bridge into Manhattan, becoming the new record-holders. There, they were met by Ken Posner, who had set the previous FKT in 2013 after completing the Long Path in nine days.

"Completing the Long Path end-to-end was the challenge of a lifetime," Dustin says. "It was the hardest thing I've ever done, but it was a chance to encounter truly wild and spectacular parts of New York. And a great way to meet the wonderful Friends of the Long Path along the way."

Conceived in 1931 as New York’s answer to the Long Trail in Vermont, the Long Path was originally meant to be an unmarked route connecting scenic or historic points of interest from New York City to Lake Placid. Since 1960, the nonprofit New York-New Jersey Trail Conference has spearheaded the effort to maintain, protect, and complete this long-distance trail.

Today, the aqua-blazed Long Path’s 358 miles connects the most cosmopolitan area in the country with the region’s most wild places. The goal is to extend the trail across the Mohawk River and Saratoga County to link with the Adirondack State Park trail system, ultimately connecting “the Big City to the Big Park.”

"It was incredibly exciting to follow Will and Dustin's progress on the Long Path," said Executive Director Ed Goodell. "I congratulate them on setting the new record for this great trail."

“The Long Path is a living, breathing thing, and a labor of love on behalf of the volunteers who are continually working to improve it,” said Ken, who is not only the former Long Path record-holder, but also a Trail Conference volunteer and board member. “It connects the dots between the natural beauty of the Hudson Valley and the cosmopolitan sprawl of the New York metropolitan area, taking you to some very special places and some very popular places. No two miles of the Long Path are the same, which makes it such a unique trail to explore and so important to protect."

The community that surrounds the Long Path is dedicated and ambitious, to say the least. Trail Conference volunteers not only maintain the trail, they also work tirelessly to protect the existing trail corridor by eliminating road walks with strategic land purchases and significant trail relocations and construction efforts. And they are a driving force behind identifying and conserving undeveloped land between Albany and Northville, N.Y., to see the trail route constructed to its ultimate destination. The adventure-seekers who chase that aqua blaze section-to-section and end-to-enders who complete the entire trail share an uncommon bond over the trail’s diversity of terrain and scenery—check out the Friends of the Long Path Facebook group for proof.

Will first connected with the Long Path after moving to Manhattan two years ago—the Long Path has even become part of his commute to work every week. After a trek on the Catskill’s Devil’s Path with Dustin, from Charlottesville, Va., they decided to follow in Ken’s footsteps and run the Long Path in its entirety.

The pair said they are grateful for the Friends of the Long Path community for their warm and welcoming support on their adventure, and they thank the volunteers who have worked so hard to make the Long Path “New York’s greatest trail.” The efforts of these trail superheroes at every trail marker and cleared tree is remarkable and appreciated.

The Long Path exists because of the incredible passion of volunteers who want to be a part of the legacy of “New York’s greatest trail.” Maintainers are always needed—adopt a section of the Long Path to call your own! Or come spend a few hours with one of our crews and help with the ongoing task of reducing road walks by constructing new trail. Help out on the Long Path this season at the Manitou's Revenge Race Aid Station, handing out food and water and cheering on the runners.

Learn more and discover all the ways you can get involved by emailing [email protected].

Find Your Next Adventure on the Long Path

Looking to explore “New York’s greatest trail?” The Trail Conference has all the resources you’ll need to plan your adventure.

Don’t forget to pack a map, and read up on sections you plan to trek in the Long Path Guide, which includes an overview map and backpacking guide. The Trail Conference publishes trail maps to help follow that aqua blaze. Due to many recent relocations of the trail, the Long Path Guide is available online and is frequently updated.

The Friends of the Long Path Facebook group is a dedicated group working to improve the overall hiking and backpacking experience for the Long Path. Join the community group and get regular updates on the trail!