In a quarter mile, the Orange Trail begins on the right. Continue along the Blue Trail, which soon bears left and begins to climb rather steeply. At the top of the climb, there is a viewpoint over Turkey Mountain to the east. The trail now heads back into the woods, bears right and descends slightly.

In less than a quarter mile, you’ll come to Tripod Rock – a huge boulder, perched on three smaller stones. Geologists explain that this boulder was deposited here by glacial action, although some believe that it may be a Native American calendar site. This unusual feature helped galvanize public support to preserve the mountain when it was threatened by development. This is a good place to take a break. When you’re ready to continue, follow the Blue Dot Trail north for 0.4 mile to a junction with the Orange Trail.

Turn left onto this trail, which goes through interesting, remote and rugged mountain scenery. In about a third of a mile, you will see a house directly ahead. Here the trail turns sharply left and climbs to the top of Eagle Cliff. After passing a huge balanced rock on the left – a glacial erratic known as Whale Head Rock – the trail bears left and begins a steep, rocky descent through mountain laurel thickets.

At the base of the descent, the trail turns right and heads north for about 0.2 mile. It then bears left, crosses a branch of Bear House Brook and reaches a junction, where the White Dot Trail begins on the right. Turn left to continue along the Orange Trail, following the sign for “Visitors Center,” and cross Bear House Brook on rocks. The Orange Trail continues south, paralleling Bear House Brook, which runs through the valley below to the left and eventually widens to form Bear Swamp.

In another half mile, you’ll reach the huge Bear Rock. This massive glacial erratic, which can be said to resemble a giant bear, has been a local landmark for centuries. It was probably used as a shelter by Native Americans, and today it marks the boundary between Kinnelon Borough and Montville Township.

From Bear Rock, turn left and follow the Yellow Dot Trail across Bear House Brook on a wooden footbridge. A short distance beyond, bear right at fork to continue along the Yellow Dot Trail. In a third of a mile, this trail will bring you up to the ridge, through a dense stand of mountain laurel.

When you reach a junction with the Blue Dot Trail, turn right, briefly retracing your steps. A short distance beyond, you’ll reach a junction with the Blue Trail. Bear right and continue ahead on the Blue Trail, which gradually climbs to the highest elevation on the Pyramid Mountain ridge (934 feet), marked by a large cairn. Here, at a sign for the "Overlook," you should turn left and head to an east-facing overlook from open rocks, with the New York City skyline visible on the horizon on a clear day.

After taking in the view, return to the Blue Trail, bear left, and follow it as it gradually descends the southwest face of the mountain on switchbacks. Near the base of the descent, the Orange Trail begins on the right at a large cairn. Follow the Blue Trail as it turns left, climbs a little, then continues to descend gradually, crossing under the power lines.

At the next intersection, bear right, continuing along the Blue Trail, which crosses a footbridge over Stony Brook and proceeds ahead to the parking area where the hike began. 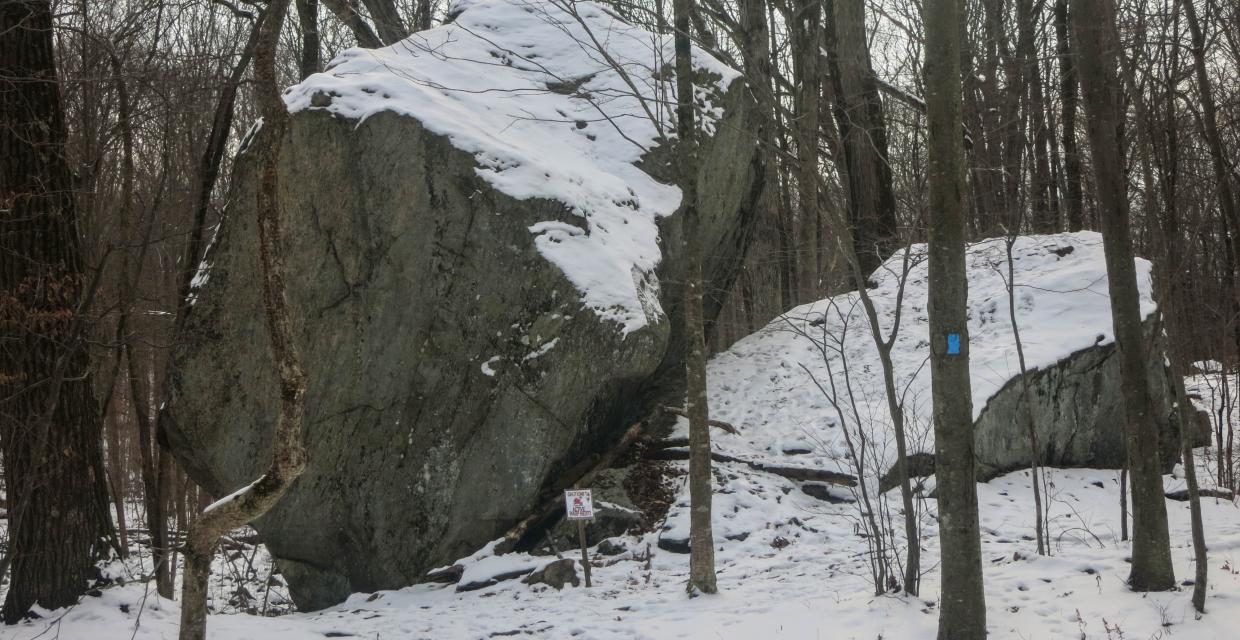 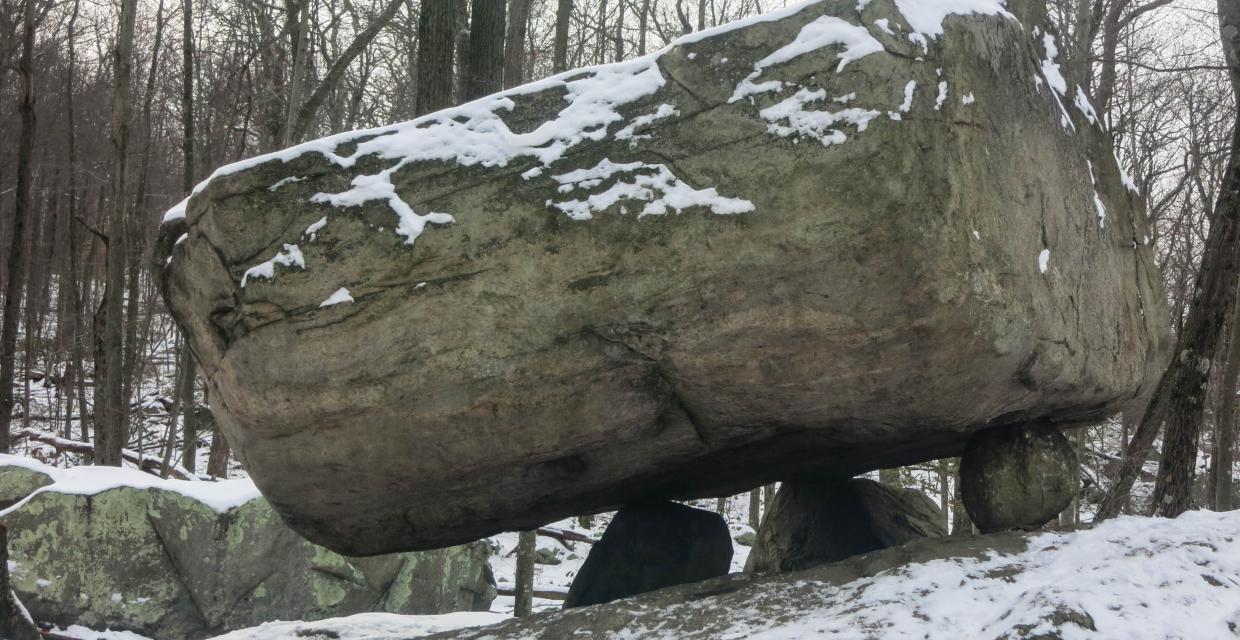 Take I-287 to Exit 44 (Main Street, Boonton). Proceed west along Main Street and turn right onto County Route 511 (Boonton Avenue). Continue on Route 511 for 3.3 miles to the parking area for the Pyramid Mountain Visitors Center, on the left side of the road (the Visitors Center is opposite Mars Park, about 0.8 mile north of the intersection of Route 511 and Taylortown Road).

rate experience
April 16, 2014
0
Most trails are open
<p>I have hiked there recently and almost all trails are open. You can&nbsp;hike to Bear Rock&nbsp;or Tripod Rock, etc.&nbsp;with no problems.&nbsp;</p> <p>The exception is the blue trail going&nbsp;to Turkey Mountain from Boonton Turnpike up the "100 steps". The power company has obliterated this section of &nbsp;trail (looks like a war zone with no trees, no blazes, etc.), although most of the "100 steps" are stll there. I do not know when the power company will finish their work in this section of trail and when park management will reblaze and reopen it.</p> <p>&nbsp;</p> <p>&nbsp;</p>
Willy
April 15, 2014
0
Trails opened?
<p>Are all the trails at Pyramid now open?</p>
i12climbup
September 25, 2013
0
Beautiful...and some updates!
<p>Couldn't have asked for a better day for hiking--mid 60s, perfectly clear, and sun everywhere.</p> <p>These directions were spot-on, and I followed everything to a T. To people reading this--I'm pretty sure they're finished with construction. I went on the "closed" trails and they were totally clear. Estimated completion time for the trails was fall 2013, so it looks like they're just about done.</p> <p>&nbsp;</p> <p>Great hike, excellent views, and really peaceful.</p>
dskatz2
More Reviews
Log in or register to post comments