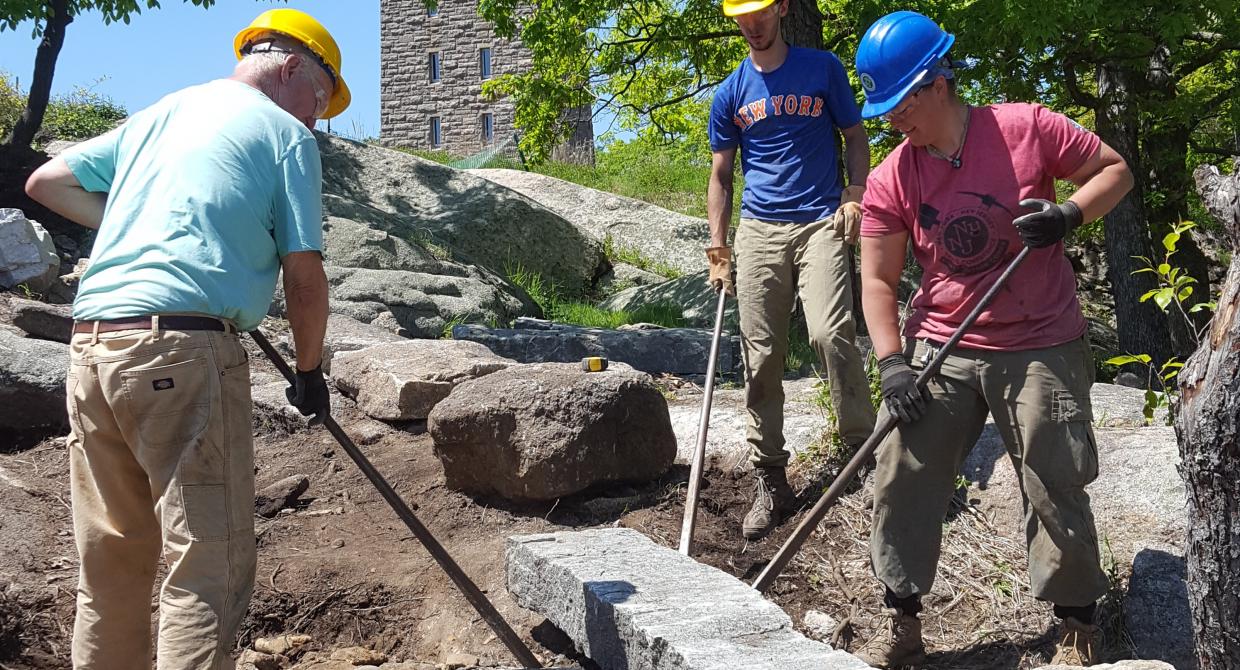 The Trail Conference Conservation Corps has been recognized for efforts to complete the most ambitious rehabilitation ever conducted on the A.T. 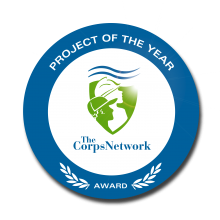 The New York-New Jersey Trail Conference's Bear Mountain Trails Project received a 2019 Project of the Year Award by The Corps Network at a ceremony on Capitol Hill in Washington, D.C., on Wednesday, Feb. 13. This national award recognizes Corps that have undertaken especially noteworthy endeavors within the past year. The Trail Conference received this prestigious honor during The Corps Network’s 2019 national conference, “Resilience.”

In September, the Trail Conference finished construction on the historic Bear Mountain Trails Project—not only the most ambitious rehabilitation of the Appalachian Trail (A.T.) ever conducted, but also the project that launched our Conservation Corps program. Over the last 14 years, the Trail Conference has rallied the community to help transform the A.T. at Bear Mountain from an eroded, washed-out, 10-foot-wide scar into a safe, sustainable footpath and educational destination.

Just 50 miles north of New York City, Bear Mountain State Park in New York attracts over 2 million people each year, making this original section of the Appalachian Trail the most heavily used. (It should be noted that it was Trail Conference volunteers who built and blazed this first section of the A.T., which they opened in 1923, and that our volunteers and Corps members have served as guardians of the Trail in New York and New Jersey for 95 years.) When issues of heavy use and degradation came to a head in 2004, a plan was needed to accommodate this high volume of hikers and protect the mountain from being "loved to death." The Trail Conference and its partners—National Park Service, Appalachian Trail Conservancy, New York State Office of Parks, Recreation and Historic Preservation, and Palisades Interstate Park Commission—initiated the Bear Mountain Trails Project as a multifaceted approach to providing an on-the-ground solution for a high-use destination that requires educational components to better inform and prepare visitors.

Work on the tread itself involved hardening the Trail with more than 1,300 granite steps, weighing an average of 500 to 800 lbs. each, from the bottom of Bear Mountain to its summit. This trail work was primarily done by hand. The project included building the first ADA-compliant section of the Appalachian Trail, and Trails for People, the first outdoor interpretive exhibit aimed at teaching park visitors how trails are made.

Twenty-five Corps members served more than 22,500 hours on this A.T. rehabilitation over the last five years. Our Corps enabled thousands of people from the community to contribute to the project; our crews trained nearly 3,000 volunteers who donated more than 83,000 hours of service. Read about some of the inspiring people who worked on the project.

“When one mentions service to our nation and our communities, it is easy to let the mind go straight to those in the military and our first responders—as well it should. However, there are among us people whose service to our country, our states, and our communities goes unnoticed,” said Trail Conference Conservation Corps Manager Geoff Hamilton, himself an Army veteran with multiple combat and peacekeeping tours of duty. “AmeriCorps members around this country are serving, and this service, while different, is no less important or admirable than those mentioned above.

“Trail Conference Conservation Corps members lead this pack,” Hamilton said. “In their diversity and dedication to service, they are a true representation of all that is beautiful about our nation and our region. Their passion shines brightly in all they do. With resolute strength of spirit they commit to their projects and overcome tremendous adversity from weather, terrain, and the sheer scope of their work—yet they keep pushing through to achieve remarkable results.”

The Project of the Year Award celebrates the important services Corps provide to communities and young people across the country. Projects of the Year are innovative and demonstrate a Corps’ ability to give Corps members a positive experience and provide the community with meaningful improvements.

The Corps Network, the National Association of Service and Conservation Corps, presents the prestigious Project of the Year Award on an annual basis to select organizations from their membership of over 130 Corps across the country. Awardees are chosen through a rigorous nomination and review process. As defined by The Corps Network, Corps are local, state, or national programs that provide young adults and recent veterans the opportunity to serve their community, advance their education, and obtain in-demand skills. Serving in crews or individual positions, Corpsmembers spend up to a year performing meaningful projects that address conservation and infrastructure concerns, wildfires and natural disasters, outdoor recreation access, and a range of other issues. Corpsmembers gain hands-on work experience through service-oriented tasks.

“All our member Corps and Corps members make significant contributions to communities across the country,” said Mary Ellen Sprenkel, President and CEO of The Corps Network. “With the Project of the Year Award, we have the opportunity to celebrate extraordinary individuals and programs from our network and shed light on the vast capabilities of Corps; our awardees are symbols of the impact of national service. The Corps Network is humbled to represent such inspiring and impactful programs as the Trail Conference Conservation Corps.”

The Trail Conference Conservation Corps, based out of Trail Conference Headquarters in Mahwah, N.J., primarily engages young adults in trail building and invasive species management in New York’s Hudson Valley and northern New Jersey. The Bear Mountain Trails Project was the catalyst for the creation of the Trail Conference Conservation Corps. With support from REI, our AmeriCorps program was born in 2014 from the need to have a full-time presence on the Appalachian Trail on Bear Mountain. This project had two specific outcomes: build a better, safer, more sustainable trail for park visitors; and develop a pool of trained volunteers to support the vast network of trails in the Hudson Valley. Training and deploying a Conservation Corps was essential in accomplishing both these goals. The Trail Conference now fields several Corps crews every season.

Three to four Project of the Year awards are presented on an annual basis to Corps that have undertaken especially influential or innovative endeavors within the past year. Projects of the Year are noteworthy for their ability to provide both a positive experience for Corpsmembers and meaningful improvements to the community.

For more information about the 2019 conference, visit The Corps Network's "Resilience" page. Learn more about the Trail Conference Conservation Corps at nynjtc.org/corps.