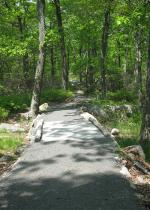 a newly-built section of the Appalachian Trail (A.T.), formally opened in a ceremony on Saturday, June 4,2011. As part of a multi-year project to reconstruct this heavily-used section of the A.T., a team of professional trail builders, together with Trail Conference volunteers, created a magnificent footpath that takes full advantage of the natural features of interest found along the trail.

The hike begins at a sign for the A.T. on the northwest side of the summit. Directly ahead is a fork. The blue-blazed fork to the left will be your return route, but for now, take the right fork, blazed with the 2"x6" white blazes of the A.T. and the red-ring-on-white blazes of the Major Welch Trail. The first third of a mile has been designed to be handicapped-accessible, thus permitting all users to enjoy a beautiful section of the A.T. Even this trail section has been skillfully designed to blend in with the surroundings.

In 500 feet, you’ll cross a gravel service road. To the right, atop a massive boulder, are the concrete foundations of a former fire tower (replaced in 1934 by the Perkins Memorial Tower). Then, a quarter mile from the start (after crossing another service road), you’ll come to another huge boulder on the left side of the trail. 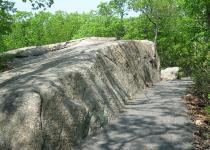 At the end of this boulder, the Major Welch Trail departs to the right at a fork, but you should bear left and continue to follow the white-blazed A.T.

After passing the end of a blue-blazed trail on the right, you’ll reach a spectacular north-facing viewpoint over the Hudson River and the hills of the West Point Military Reservation, with Brooks Lake visible directly below. This marks the end of the accessible trail section. After taking in the view, bear left and descend stone steps. Ahead, you will see a stone pillar that once marked the boundary between the park and West Point. 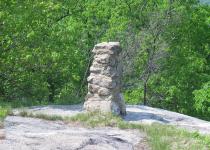 The trail again curves sharply to the left and begins to head south through dense mountain laurel thickets, with an understory of blueberry. This section of the A.T. features many stone steps, most of which were shaped on-site from native rock. In a quarter mile, you’ll pass two huge boulders to the left, with stone steps curving up from the end of the second boulder.

In another 500 feet, you’ll reach a junction atop a flat rock with a blue-blazed trail that begins on the left. This will be your return route, but continue ahead on the white-blazed A.T. About 500 feet beyond this junction, the A.T. emerges on a flat pockmarked rock surface and soon reaches the start of another blue-blazed trail at a south-facing viewpoint over West Mountain.

Turn right and follow the blue-blazed side trail, which soon emerges on another rock outcrop, with excellent views to the west (Queensboro Lake may be seen below). This side trail follows a former route of the Major Welch Trail and was blazed by volunteers as a side trail to the A.T. to preserve the magnificent views. 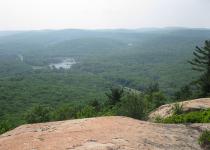 In 500 feet, the side trail ends at a triple blaze. Turn around, retrace your steps to the A.T., then turn left and proceed along the A.T. to the junction with the blue-blazed trail that you passed earlier. Now turn right and follow this connector trail, which soon reaches a long boulder, with stone steps ingeniously placed as the trail climbs along the boulder. The blue-blazed trail continues to climb until it reaches Perkins Memorial Drive at the base of the Perkins Memorial Tower, where the hike began. 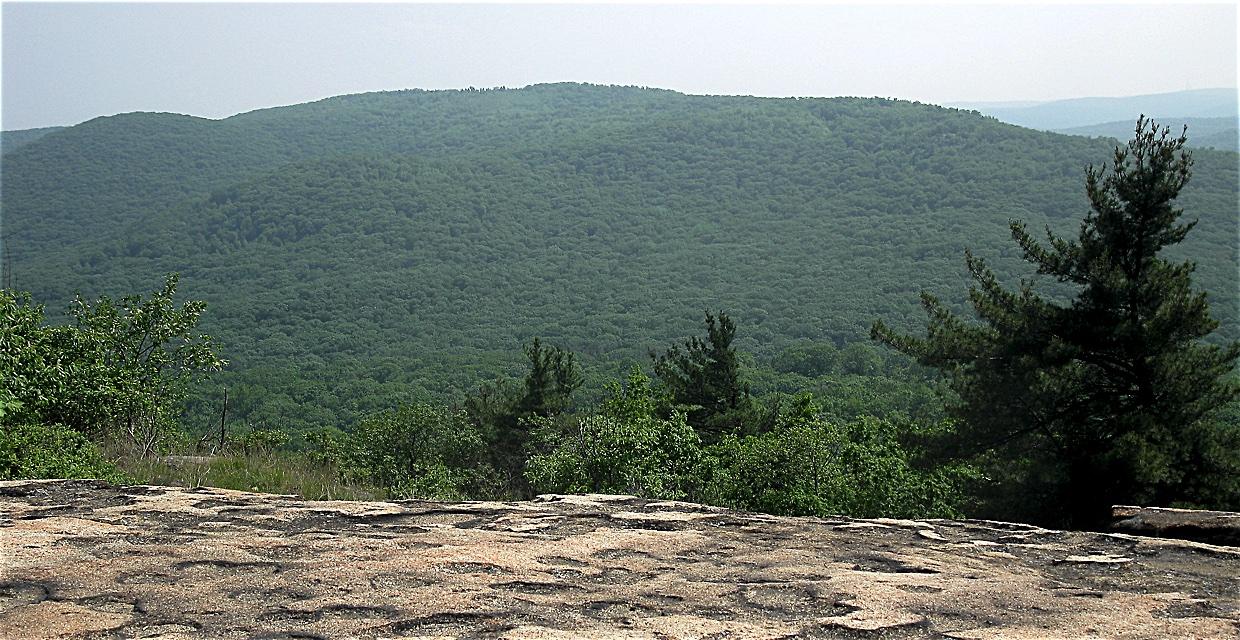 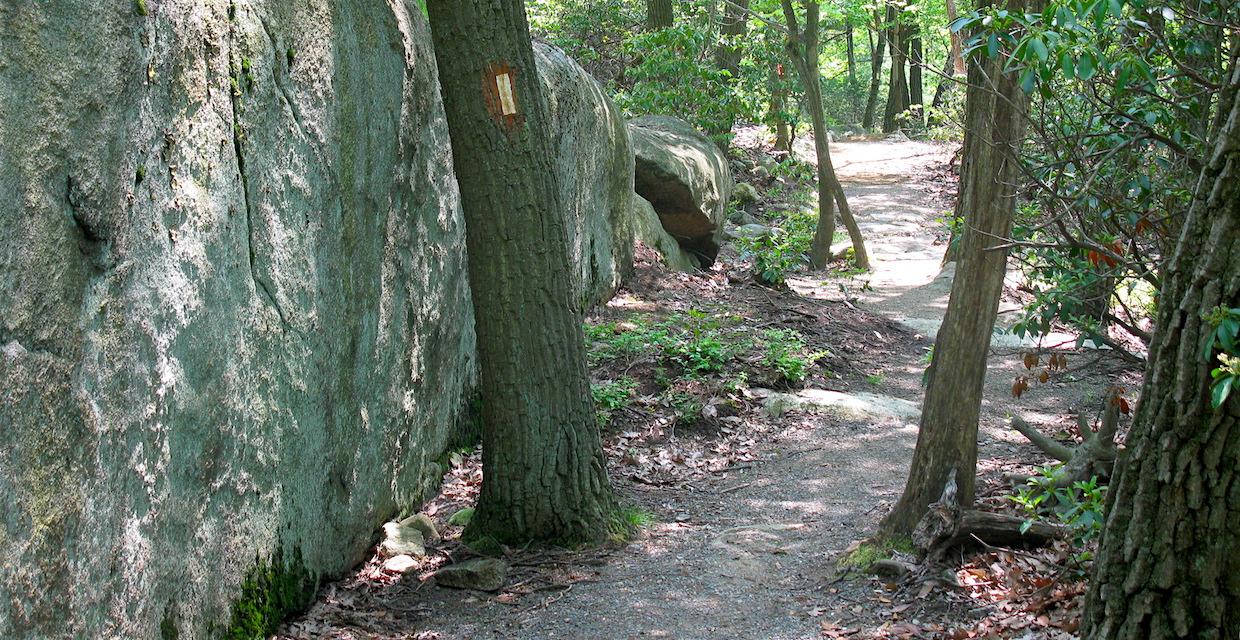 This hike loops around the summit of Bear Mountain, passing several spectacular viewpoints.

rate experience
March 25, 2014
0
Road closure
<p>The road to the top -- Perkins Memorial Drive -- is gated where it connects to Seven Lakes Drive and its opening schedule is listed on http://nysparks.com/parks/13/hours-of-operation.aspx as: "Perkins Memorial Drive &amp; Tower Hours: April – late November; daylight hours weather permitting".</p>
rufusfoofus
April 28, 2013
0
Great Hike!
<p>Hiked this trail today with my husband and two children - &nbsp;five and eight years old, and it was perfect for us all. &nbsp;The hike description above is very accurate and the views are amazing. &nbsp;The handicapped accessible beginning of the trail is a nice leisurely start and maintains energy for later. &nbsp;The stone steps and boulders made this trail just challenging enough for my children to keep them excited but not too wearing. &nbsp;Loved all the viewpoints and amazing panoramic vistas. &nbsp;Make sure to bring a good camera!</p>
valmill200
Log in or register to post comments